Today, our allegedly free and fearless press has managed two things with its news coverage: one, a rare show of unanimity on the lead story, and two, a pathetic combination of blatant dishonesty and victimhood playing. The story was the conviction of former entertainer Rolf Harris, the rest was a wailing and bawling excuse note attempting to cover up for collective failure. 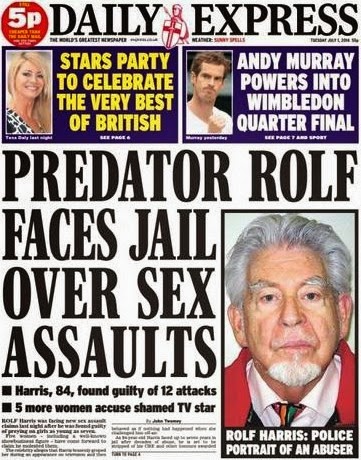 From the Express, with “Predator Rolf Faces Jail Over Sex Assaults”, through the Mail’s “For 50 years, he was the face of wholesome family TV. Now we know the truth: Rolf is a predator who duped us all”, the Mirror’s simple “Unmasked”, the Sun’s creative “Rolf & Savile stalked Broadmoor together”, the Telegraph’s “Rolf Harris, entertainer, artist and sex abuser, could die in jail” and the Times’ “Rolf Harris’s 40 years of depravity”, the splash is the same. 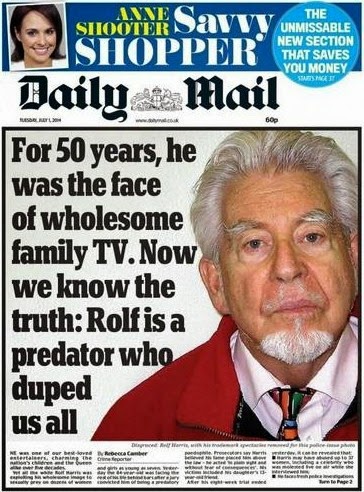 Then the straight reporting ends, and the spin begins: if Harris had been at it for between 40 and 50 years, someone within the Fourth Estate had plenty of opportunity to nail him. They did not. This thought, however, could not be allowed to enter, and so began the effort to get readers to “look over there”. 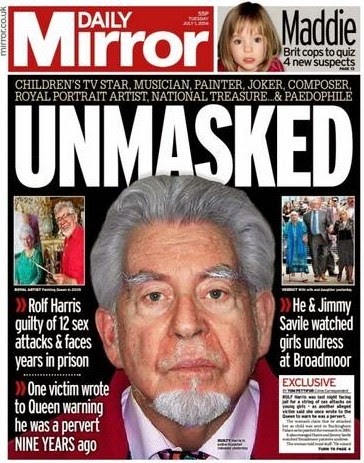 So the conduct of the Harris case morphed seamlessly into an assault on the Leveson Inquiry, and by association the campaigning group Hacked Off, as exemplified by the Sun’s editorial, most likely penned by the paper’s non-bullying political editor Tom Newton Dunn. This talks of “newspaper-loathing luvvies” and tells of the Met’s “new culture of secrecy” (aka not taking bungs from the Sun). 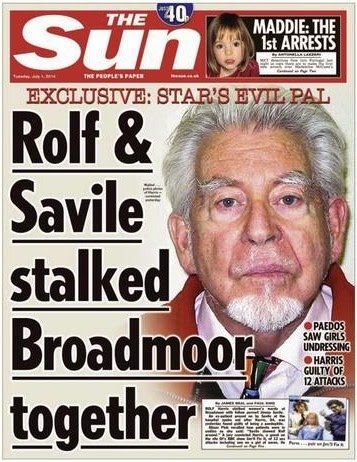 This culture, readers are told, was “launched by the Leveson Inquiry”, which is the kind of weapons grade bullshit which passes for journalism with Rupe’s downmarket troops nowadays. The Leveson Inquiry has launched nothing as yet, and a few lawyers waving the judge’s name about does not change that mildly inconvenient fact. It was no better over at the Mail. 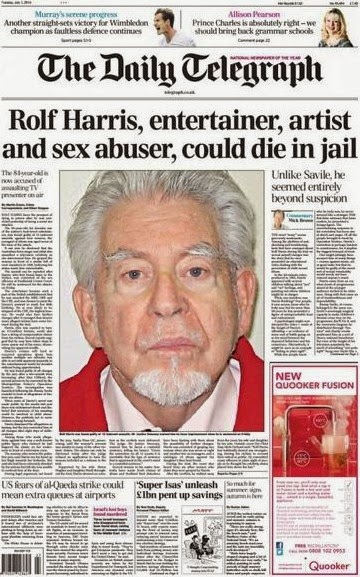 “How Rolf's bullying lawyers cited Leveson inquiry to hide his arrest for four months and nearly jeopardised his conviction” howls the headline, while Daily Mail Comment, the authentic voice of the Vagina Monologue, thunders “Rolf Harris and how secrecy betrays justice” because the Police did not at first name Harris. But I’m not minded to Look Over There, and the reason is straightforward. 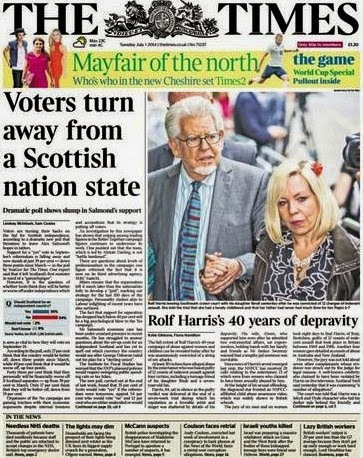 Nothing, repeat nothing, repeat NOTHING in Leveson’s report would have stopped Harris getting guilty. And by the press’ own calculations, he was at it for between 40 and 50 years. Even deducting the two years since Leveson reported, that leaves at least 38 years when our free and fearless press had its chance to get Rolf – but, as with so many other cases, did nothing, and so got nowhere.

There is only one failure in this case – that of the press to do its job. AGAIN.
Posted by Tim Fenton at 10:32

Or perhaps they did their job and used the information in other ways?

Unhealthy links between media, police, politicians and possibly the secret services makes one wonder whether the general populace is being served properly or whether a status quo for those at the top is the priority?

Love The way the Sun and The Mail are now trying to imply Rolf Harris' Activities were tacitly hidden by Levenson, as if to say that supporting the enquiry would have meant he would have gone unpunished.
Oh, and throw in an unsubstantiated claim re: Jimmy Savile into the bargain, as now his name is now less than mud, he won't sue either.
Is this what passes for a free and strident press nowadays - I don't think so!