The expertise with which the Daily Mail’s unfunny and tedious churnalist Richard Littlejohn tells his readers to “look over there” has returned to bite him this afternoon, as The Sage Of Vero Beach has been caught trivialising historic sex offences which have turned out to be anything but trivial. Dicky Windbag has, into the bargain, questioned Police tactics, and got that wrong too. 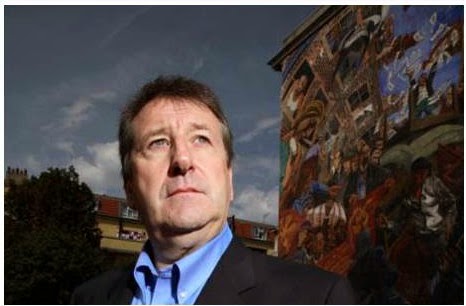 “We’ve been here before and we’ll be back here again. It’s the same old song every time a terrorist atrocity strikes at the heart of Britain” he ranted in May last year, before going on about investigations into phone hacking. “Yet what thanks did [Police] get? They got monstered for failing to prioritise allegations that some journalists may have been listening to Ulrika Jonsson’s mobile phone voicemails”.

And off he goes: “At last count there were 130 detectives investigating phone-hacking and assorted misdemeanours, and another 30 working on an inquiry into who leaked details of ‘Plebgate’ to The Sun. Not to mention all those feeling the collars of ageing celebrities accused of ‘historic’ sex crimes”. And who might these alleged offences have involved, Dicky Boy?

“I wonder if those Met officers swanning round Australia interviewing women who claim to have been touched up by Rolf Harris four decades ago could have been better deployed on anti-terrorist surveillance duties in South London” he mused, before checking that the superior Stateside sparkling wine was on ice and the pool temperature was sufficient for his afternoon dip.

Then he returned to the subject of He Who Tied His Kangaroo Down the following August, as he talked of “ageing TV celebrities were being rounded up by the Jimmy Savile squad, sometimes on the flimsiest of pretexts ... [those] such as ... Rolf Harris are in legal limbo, neither charged nor able to clear their names”. Then he attempts to trivialise the investigation into Harris.

“Harris was re-arrested this month. Officers have even travelled to Australia trawling for victims after one 43-year-old woman claimed to have been assaulted by Harris when she was a teenager. Nice work if you can get it, Sarge”. So there you have it: “trawling for victims ... swanning around Australia ... four decades ago”. Yeah, because of that, Lee Rigby got murdered!

No word yet from Dicky Windbag on the latest news: “The veteran entertainer and artist Rolf Harris is facing prison after being found guilty of indecent assault following a trial in which he was portrayed as a ‘Jekyll and Hyde’ character who used his celebrity status to grope and abuse young women and girls”. Guilty on twelve counts of indecent assault. Littlejohn’s excuse note should be worth reading.

Is that what he’s writing just now, readers? Can you tell what it is yet?
Posted by Tim Fenton at 17:23

Any Yewtree knocking article from Littlejohn always ends, 'And Jimmy Savile is still dead'. Apart from starting a sentence using the conjunction 'and', something that would have a blackboard eraser flung headwards by our irate English teacher, it doesn't make any sense. Is he saying that the past is another country, things were different then and best left alone, move on, nothing to see here? Yes Bill Roache and the bloke who fixed cars in Corrie were accused and found not guilty but we have Savile, Hall and Harris who have been found guilty, apart from Savile who is still dead.