Sun Gets The Hairdryer Treatment

The drive downmarket in the tabloid press was exemplified this morning by the Super Soaraway Currant Bun’s bizarre and creepy use of a four-year-old boy – his face not pixellated – to promote a supposedly light-hearted tale of the minor occult. Readers were regaled by the headline “Satan symbol on chest ... BOY, 4 HAS MARK OF DEVIL”. This, it seems, trumped real world events. 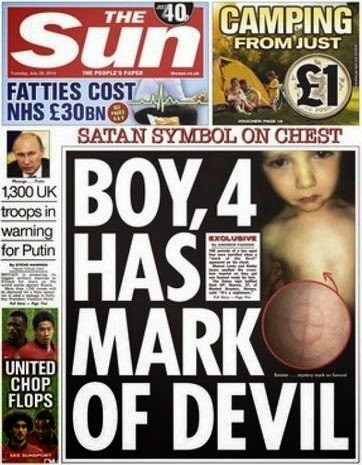 Moreover, the story is tagged “Exclusive”, but is anything but: this flimsy confection, it seems, had already been posted on Facebook by the child’s parents. The family was identified, so that those with a pathological hatred of anything occult-related could find out how to get in touch and disrupt a family’s life. And what kicks off when the poor child starts school – goodness only knows.

Rupe’s downmarket troops will not say whether they paid actual money for this hokum, only that “We are conscious of the code and guidance around paying parents”. So did they pay for it, knowing that they would then splash an easily identifiable four-year-old all over a paper that sells around two million copies a day? Paying money in order to knowingly exploit a minor?

And if the idea of paying money for something that is no more than a lift from social media seems unappealing, the thought then enters that the supposedly diabolical body mark has a very straightforward explanation. The Sun excuses itself by asserting “An unusual mark appears, the mother gets it checked out by a doctor who confirms there is no medical reason why it should be there, and discharges her”.

However, and in this case there is a significantly sized however, one look at the supposedly satanic mark shows that it exhibits signs of being a mild burn mark. And there is one household electrical item well capable of inflicting such a mark if misused, that being the humble hairdryer (that’s the one you need to plug in, not a former football manager).

A hot hairdryer barrel could easily burn sensitive skin, and the most likely part of the barrel end to produce the burn would be the centre (the outside circle would be cooler and usually has a protruding lip). There would be only one problem with this explanation: it wouldn’t have any value when it came to anyone trying to flog the story to the press. But an unexpected devil mark certainly would.

So that’s another instance of where the Murdoch faithful have failed to engage brain before publishing, and another example of why they deserve every last drop of that tsunami of condemnation that, right now, is washing all over them. It’s inexcusable exploitation for nothing more than quick commercial gain, and the story has a straightforward explanation. So it shouldn’t have seen the light of day.

Which means it’s ideal material for the Sun. No change there, then.
Posted by Tim Fenton at 17:28

There must be a joke there somewhere but can't think of one.

Something to do with hot air, global warming and Murdoch perhaps?

I can see Social Services turning up shortly.

The more this newspaper discredits itself the better for all decent people in this country. Let it hang itself.