Thomas The Tank Engine – Lighten Up 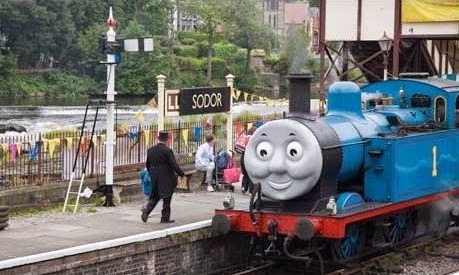 Ms Van Slyke has penned a contribution to the Guardian’s Comment Is Free (CiF), and it is to be hoped that this is a very occasional contribution indeed. Here, she tells that there is – to her, at least – “Classism, sexism [and] anti-environmentalism bordering on racism” embedded in a genre that is lapped up by millions of unsuspecting children worldwide. What is the identity of the culprit?

This supposed vehicle for the subversion of minors is none other than Thomas The Tank Engine. Yes, I too have struggled to see how the Reverend Wilbert Awdry – an Anglican priest – was able to write such horrors into those books which followed from his bedtime stories for son Christopher, who was at the time recovering from a bout of measles. What did everyone miss?

You’ll love this: “when the good engines pump out white smoke and the bad engines pump out black smoke – and they are all pumping out smoke – it's not hard to make the leap into the race territory”. Christ On A Bike, that’s desperate. And the Fat Controller does not wear a “tuxedo”, Ms Van Slyke. It’s called a Frock Coat. We’re talking about something particularly English here.

Oh, and the most damning indictment of the Thomas genre is that James The Red Engine got the piss taken out of him when he was summoned by the Fat Controller to do a job while still in pink undercoat. Well, have I got news for Ms Van Slyke: Thomas The Tank Engine does not contain any coded messages. For goodness’ sake, these are stories for children, no more, no less.

Small wonder that one of those stopping by to comment on this hyperbolic confection observed that “peak Guardian” had been reached. Few have taken it seriously, although some of those trying – again – to pretend that CiF equals Guardian editorial line have revealed their own shortcomings in the process. Step forward the perpetually thirsty Paul Staines at the Guido Fawkes blog.

The Great Guido took grave exception to Ms Van Slyke’s talk of engines emitting smoke: “It’s not white smoke you numpty, it’s steam. They are steam engines”. Staines and his rabble must have missed the overall roof at St Pancras before it was cleaned. Likewise King’s Cross, Manchester Piccadilly, Liverpool Lime Street, and yes, even Crewe. Of course they pump out smoke.

And now the smoke has gone, there are pundits to pump out guff instead.
Posted by Tim Fenton at 10:53

Desperate isn't even the word!

I would say though, as a matter of pedantry, the Fat Controller wore a morning suit; the frock coat (of which I own a wonderful 1920's example from Luxembourg) was full fronted and double-breasted as a winter version of the morning coat. And to mix it up all up with a "tuxedo" Ms Van Slyke...sartorial sacrilege.

As far as steam goes...well, white "smoke" is steam mostly, from an efficient fire and usage of it, black "smoke" contains a much larger number of particulates from inefficient fire use - as often noticed when pulling away from stations, or when working with a dodgy fireman!

Still, only a true desperado would read an allegory of being laughed at because you're off to work in your underwear (undercoat/underwear, geddit?) as a slight against homosexuals. I mean, blast that homophobic lead oxide primer!

I presumed it was a spoof, either at the Guardian's expense "hoho! let's see if they'll publish *this*!" or with their knowledge.

She has since tweeted to indicate that it was a 'humourous' piece. And it was written (I assume) primarily for the Guardian's US readership (orr the subset thereof who have degrees in comparative literature).

To be honest, she is taking exception to the children's TV series as packaged for the States, which diverges increasingly from the Awdry canon. Christopher Awdry has written sadly about the malign influence of marketeers on the Thomas output, and I have to say I agree.

It's not clear whether TVS has actually read any of the original books. I ssuspect that if she were to do so she would have a conniption.

The most interesting thing about Thomas and Friends is the absolutely horrific safety record. Pretty much every episode there's a derailment, if not an outright crash. Clearly the Fat Controller is in control of nothing. Is the Island of Sodor running a state-owned or privatised railway, and how much of taxpayers hard earned money is being thrown away on this dangerous and outdated network? I think we should be told.

That's because they're essentially morality tales, with the disaster usually being punishment for a character flaw in one of the engines - Henry's vanity, Thomas's arrogance and disrespect, Gordon's conceit, Daisy's selfishness and so on. There are a few exceptions, such as the Flying Kipper, which was always my favourite and is based on the Abbots Ripton crash, I think, caused by frozen signals.

Given that they're written by a priest, the obvious source for tales involving sudden externally applied punishment for sin is your basic old time religion, but the lesson children take away is generally that behaving decently and being generous to others is less disaster prone than getting above yourself and acting like a dickhead, which is hardly going to shake the foundations of the civilised world. Note that the Fat Controller doesn't play God, but is more a kind of priest figure...

"the lesson children take away is generally that behaving decently and being generous to others is less disaster prone than getting above yourself and acting like a dickhead" - very true, what a pity the board of Railtrack didn't pick that up when they were created.

I agree with most of her article. The lack of central female characters on 'Thomas and Friends' is really annoying - even in the usually male-centric world of kids' TV - and the James-laughed-at-for-wearing-pink episode is pretty shameful all round.