Many pundits have opened mouth and inserted boot since Nick Davies first blew the whistle on the extent of hacking under the editorship of Andy Coulson. Tim Montgomerie told that “It is a desperate attempt by Labour to get revenge for the ousting of Damian McBride ... Rupert Murdoch has been an overwhelming force for good in this country’s life and politics”. He was later duly rewarded. 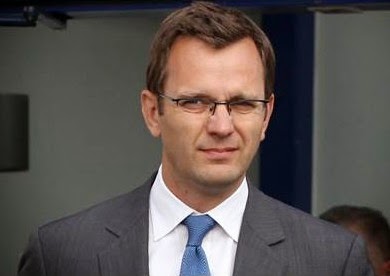 Iain Dale, quite apart from asserting that “Coulson’s accusers can go to hell”, contributed this magnificent slice of hokum: “David Cameron is reported to be ‘relaxed’ about it. That may be because, like any responsible employer, he did his due diligence on Andy Coulson before he was appointed” [my emphasis]. Iain hasn’t mentioned that recently. So I will.

But the World’s Worst Coulson Pundit Award has to go to an unhinged rant by one commentator who must be wishing I had not screen-shotted his blog before he deleted it. This prize specimen told “Barring a total and utter shitstorm on Tuesday when Coulson will have to face the music of a select committee, and by God Tom Watson will try, he is relatively safe”. For some value of “relatively”, then. 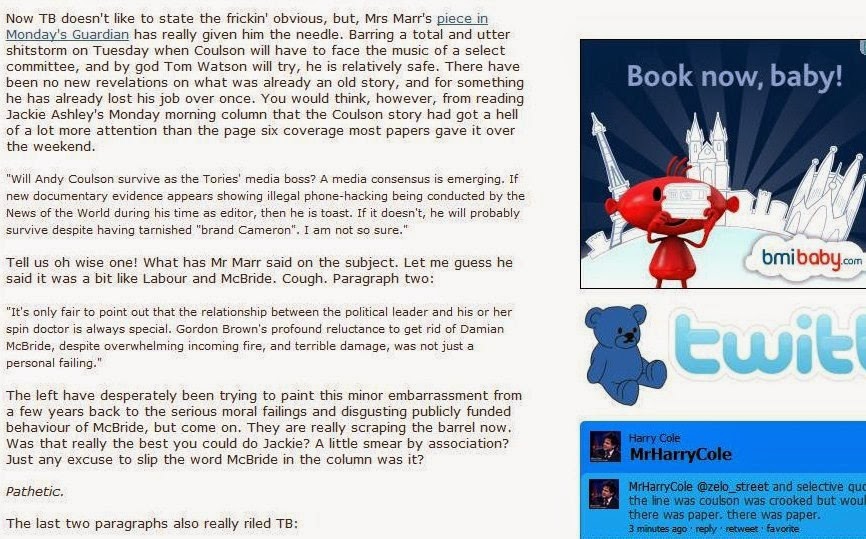 The rant went on “There have been no new revelations on what was already an old story, and for something he has lost his job over once. You would think however, from reading Jackie Ashley’s Monday morning column that the Coulson story had got a hell of a lot more attention than the page six coverage most papers gave it over the weekend”. Can you guess who it is yet?

And then it all became yet rantier: “The left have been desperately been trying to paint this minor embarrassment from a few years back to the serious moral failings and disgusting publicly funded behaviour of McBride, but come on. They are really scraping the barrel now. Is that really the best you could do Jackie? A little smear by association?” Someone is seriously off course here. 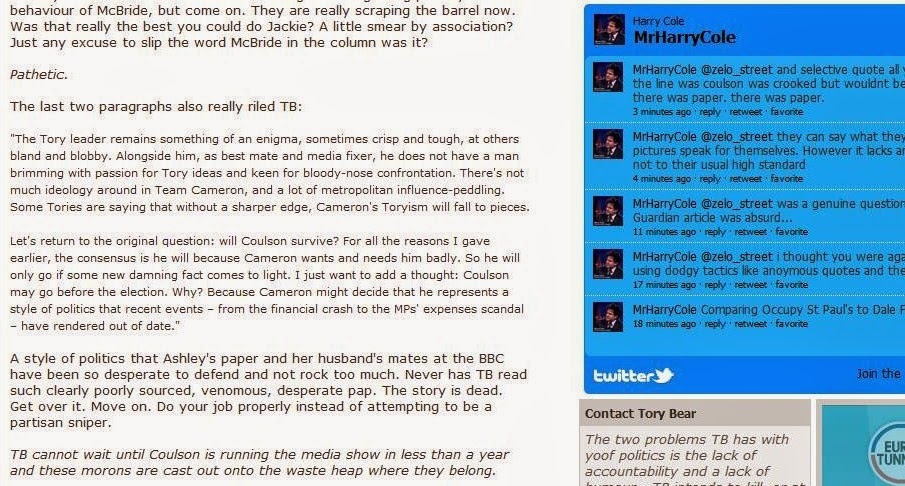 But on it ploughs: “Never [have I] read such clearly poorly sourced, desperate, venomous pap. The story is dead. Get over it. Move on. Do your job properly instead of attempting to be a partisan sniper. [I] cannot wait until Coulson is running the media show in less than a year and these morons are cast out onto the waste heap where they belong”. Who on earth would give this idiot the time of day?

Well, everyone who has given the odious flannelled fool Henry Cole, tame gofer to the perpetually thirsty Paul Staines at the Guido Fawkes blog, that’s who – because Cole, in his previous incarnation as Tory Bear, was the buffoon who authored that spectacularly wrong take on Coulson, who has today been sentenced to 18 months’ imprisonment for his part in the phone hacking conspiracy.

Master Cole is therefore the runaway winner of the Worst Coulson Punditry Award.
Posted by Tim Fenton at 16:56

Hindsight is a wonderful thing.

Is that really you, Iain? Do you still think that Cameron actually did due diligence?

It's interesting how so many politicos only saw this story as some kind of fight between political tribes and couldn't see the wider significance.

Presumably, then, everyone who accused Coulson while more prudent voices were defending him had access to a time machine.

"Presumably, then, everyone who accused Coulson while more prudent voices were defending him had access to a time machine."

There are those so blind that fail to see any thing beyond their own little petty agenda. It's a pity that so much of UK politics takes place with this sort of background.

It is plain that the more "prudent" voices were those which were ignored, and wilfully so as Coulson wasn't fully vetted, by Cameron at the time of the appointment.

The "hindsight" excuse is an interesting one, and it has cropped up quite a bit recently.

On TV, radio, the press and the internet there is a plethora of spin-doctors, political bloggers and self-appointed experts. Despite their number there is a lack of diversity of views: what they say usually clusters around a particular narrative. There is an echo chamber effect, with bloggers following the lead of spin doctors or vice versa. Often this narrative is based on assertions rather than evidence:- "We all know Saddam has WMD"; "Phone-hacking isn't a story"; "It is just pay-back by the Labour Party for XYZ".

Then when the evidence comes through, and blows a hole in their narrative, they say "nobody would have expected that" and point at all the other bloggers and spin-doctors who have been repeating the same narrative. They are ignoring, of course, the "nobodies" who actually had thought of the other possibilities - who had thought of the possibility that Iraq had no WMD or that Cameron had neglected to vet Coulson.

Dale's assertion that Cameron did his due diligence on Coulson is just that: an assertion. Dale doesn't tell us how he knows that there was due diligence. Did he see the file? Did Cameron tell Dale or was it an official spokesman? Or was it an off-the-record briefing? Or did Dale just assume that Cameron was a good bloke and would have followed the proper procedures? There is a lot of difference: whose reputation is at risk if it turns out to be untrue?

Hindsight? It is true that none of us could have known the details of the risk assessments about Coulson. None of us could have known that he was seeing documents above the level for which he was vetted. But there was evidence that there was large-scale hacking and it was difficult to see how the editor could not know: so that raised questions about what risks Cameron was taking. Asserting that Cameron had done due diligence didn't answer those questions.