After former entertainer Rolf Harris was found guilty of a number of sexual assaults, Amanda Platell, the Daily Mail’s regular Saturday Glenda, was faced with the prospect of having to perform some serious logic gymnastics if her credibility was to survive intact. For she had already told readers that Rolf was entirely innocent – well, as far as she could do so without coming out and saying it. 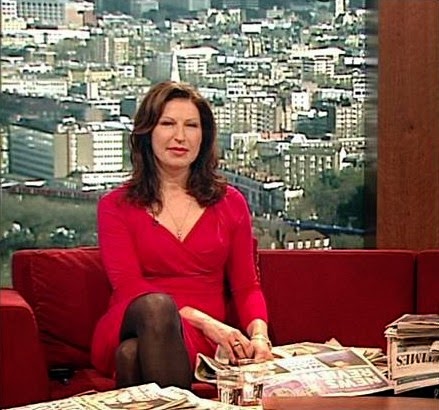 “Few could be more shocked than I at the news that Rolf Harris has been arrested on suspicion of sex offences, for he has been a friend of mine for more than 15 years. I know Rolf as a kind and generous man. I also know from past experience that, at times like this, you stand by your friends. That's why I pray not only that he is proven innocent, but also that he can survive what is to come” she told.

Then came a comparison she will probably now regret: “A few years ago, another friend, a Catholic priest, was charged with a sexual assault in his distant past. Instead of being believed innocent until proven guilty, he lost his job as a result of the allegations and spent the next two years fighting the charges ... in due course he was completely exonerated”. It got worse.

“The girl concerned was a fantasist with mental health problems which had been well documented, yet still that poor priest had to endure two years of living hell which left his reputation damaged for ever, particularly by smears on the internet. My friend was a victim ... In the aftermath of the Jimmy Savile scandal, I fear we are in danger of doing the same thing to men such as Rolf”. So he didn’t do it.

But now everybody knows he did do it. What to do, Mandy? Of course – join the victims! “My old friend Rolf groomed me too” wails the headline. Wait, what? Was he a childhood friend? Do tell! “I first met him some 16 years ago when my then boyfriend invited him — as a surprise — to my 40th birthday party”. Hang on, he’s supposed to have groomed you ... and YOU WERE 40?!?

It gets worse: “I was so overcome, I took him upstairs away from my other guests to keep him to myself for a while”. And that’s “grooming”?!? Then the tone turns sinister: “At the time, I was so excited that I didn’t pause to wonder why this star ... would turn up at a stranger’s party. Now I suspect he was tempted by the fact he knew it would be full of journalists who might one day be useful to him”. Yeah, right.

Sixteen years and a trial later, that is. So it’s time to get out the onion: “It’s only this week that I’ve been forced to confront the hard truth”. Yes? Yes yes? Yes yes yes? “And I can deny it no longer: the man I adored betrayed me ... I was conned by a cunning and manipulative paedophile ... it has shattered ... my ... lifelong belief that I am a good judge of character”. Heck, everyone else knew that all along.

Ms Platell backed the wrong horse. But she couldn’t admit she was wrong.
Posted by Tim Fenton at 17:26

I posted on the DM comments about her first observations re uncle Rolf. I pointed out that her loyalty to a fellow Aussie was admirable but sadly misplaced. I also mentioned her predilection for putting herself first.personally. now. How can it be that this woman finds herself so close to the 'action' so often?

"Can you tell what it is yet?"
"A reverse ferret?"

Didn't realise she had any credibility left to save!!

It would be good to think that her realisation that she is not a good judge of character might be an epiphany. Can we assume that her column will no longer be full of smartarse bitchy comments on whoever has annoyed her or her editor? Sadly, I don't think we can.

Of course, dear Amanda is the true victim in all of this.