A former tabloid editor and two of his senior staff sent down, to the judge’s stinging condemnation over their prioritising sales over the well-being of a missing schoolgirl, and their paper closed in shame three years ago to the day. That, one might think, would be a newsworthy event. But that would also be to misunderstand the mindset of the larger part of the Fourth Estate. 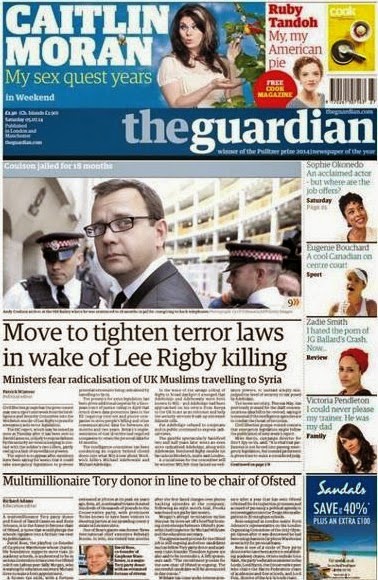 Because, despite the phone hacking saga being just as significant a story as I said it was five years ago – you can see the Zelo Street view in four posts from 9th July 2009 HERE, HERE, HERE and HERE – the press now, as then, would rather not let its readers know what it gets up to in order to dig up what passes as news nowadays. So an alternative front page lead was needed. 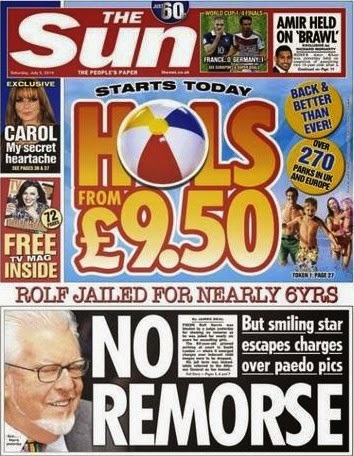 Thus it was that the deeply subversive Guardian duly led with a photo of Andy Coulson, now in Belmarsh Prison, but everyone else cashed in on the conviction later in the day of former entertainer Rolf Harris. The Sun – wanting readers to “look over there” and away from the Murdoch empire’s darker side – howled “No Remorse ... but smiling star escapes charges over paedo pics”. 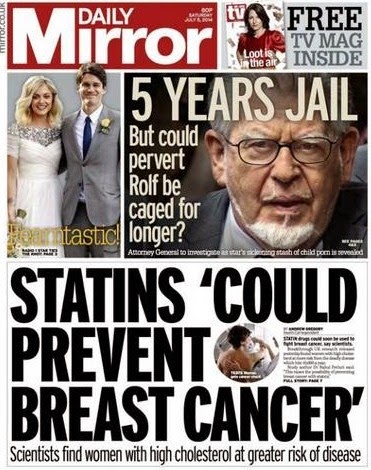 Yes folks, Rupe’s downmarket troops are as intercoursing subtle as ever. The Mirror was also minded to keep hacking off the front page – not that the possibility of action against its Sunday stablemate had anything to do with that, you understand – and so told readers “5 Years’ Jail ... but could pervert Rolf be caged for longer?” Yeah, lock him up and chuck the key away. Let’s talk retribution (but not hacking)! 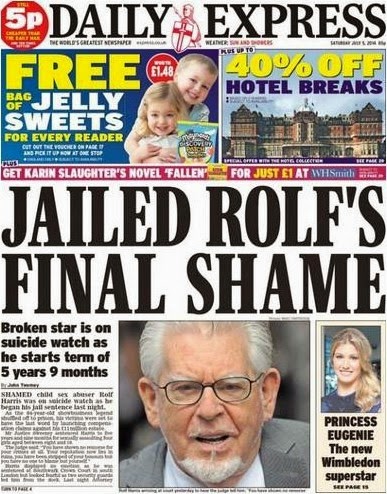 Even the Express managed to tear itself away from its usual round of miracle cures that don’t exist, weather no shock horror stories, and generally made-up rubbish about the EU and migrants, to bring a new angle: “Jailed Rolf’s Final Shame ... Broken star is on suicide watch as he starts term of 5 years 9 months”. Was Harris on suicide watch? Who knows? Who at the Express cares? 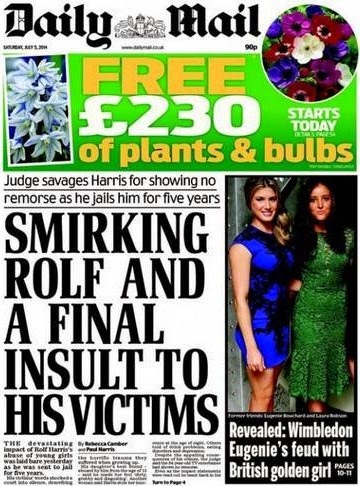 The Mail eagerly joined in, not that this had anything to do with their titles being top of Steve Whittamore’s illegal information gathering pops, of course. “Judge savages Harris for showing no remorse as he jails him for five years ... Smirking Rolf And A Final Insult To His Victims” thunders the headline. No sign of the hacking trial there, and no sign of it at the supposedly upmarket Telegraph, either. 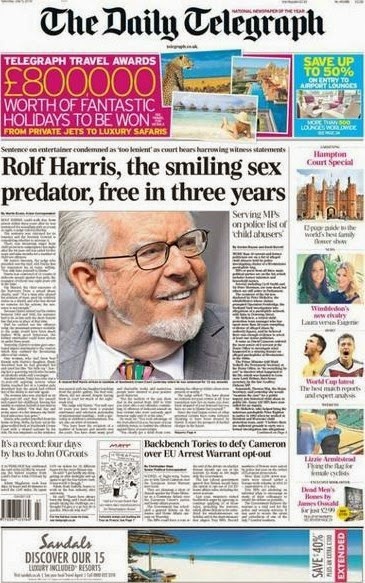 “Sentence on entertainer condemned as ‘too lenient’ as court hears harrowing witness statements ... Rolf Harris, the smiling sex predator, free in three years” it gasps. The Harris conviction was, indeed, a fortunate event for most of the press, as this chapter of the phone hacking saga ended as it began, with the Guardian left alone to tell of the Fourth Estate’s worst excesses.

The first rule of the hacking trial, for most papers, is that you don’t talk about it.
Posted by Tim Fenton at 10:57

Love the Sun's Comment that implies that Rolf Harris' Computer had "Paedo" Pictures of them - funny how they dispense with the time-consuming bother of actually evaluating the evidence - He's GUILTY - BURN HIM! - And the Telegraph - "Out In Three Years" - Yes, this evil abuser who has now been bought to justice, will be free by the due process of Law to abuse again when he's 87! - THE HORROR, THE HORROR!