Those wondering why using terms like “marionette” when talking about Jews was not a clever or sensible thing to do, following my adverse comment on the perpetually thirsty Paul Staines and his superannuated sleazebag sketchwriter Simon Carr’s abusive characterisation of Mil The Younger the other day, are in luck: The Great Guido himself has told us why this is A Very Bad Thing. 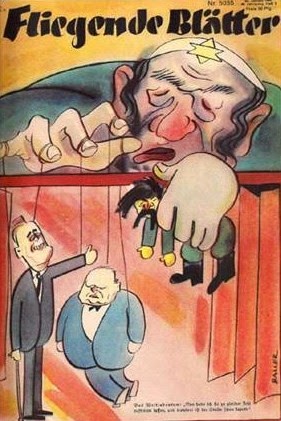 As the Holocaust Chronicle shows, during the 1930s there were a number of portrayals of Jews as “puppet masters”, with those they thus controlled therefore mere marionettes. This was also confirmed by the Fawkes rabble when they launched an attack on Guardian cartoonist Steve Bell, although Bell had deliberately used glove puppets and not marionettes.

Bell’s suggestion that Israeli PM Binyamin Netenyahu was manipulating William ‘Ague and supposed Middle East envoy Tone was milked heavily by The Great Guido, to the extent of Staines ordering up a crude Hitler characterisation from his resident and not very talented cartoonist. The message was clear: the Fawkes folks were hot on any suggestion of “Jews as puppet masters”.

Now look at Carr’s “sketch” from Wednesday, which asserts that Ed Miliband “dances at the despatch box like a spastic marionette”, following that with talking of his “convulsive string master taking another swig of the meths”. Quite apart from the barrel-scraping abuse of “spastic”, there is a clear instance of anti-Semitism – from a blog that likes to pretend it is hot on anti-Semitism.

And, on top of the rank hypocrisy, Staines will have known full well that Carr had a tendency to this kind of behaviour. Take this sketch from March 2011: “Over here we have the tall, well-dressed captain of the Upper Blues, popular with the grown-ups, easy way about him with the younger boys. And over there, that specimen is the head of the Lower Reds with the ears, teeth, and peculiar mouth”.

Ready? Here it comes: “Not exactly swarthy, but not what you'd call properly English either. Something rum about him”. And what, Simon, would you have meant by that? Something Middle Eastern, perhaps? As in “Disney could use him as a model for a villainous vizier in the Arabian Nights. Do you get him up in the morning by rubbing his lamp?” Swarthy. Not properly English. Rum. Perhaps Middle Eastern.

Then Carr introduces his “marionette” jibe, and we know exactly how “swarthy”, “not properly English”, and “rum” he means. How very far-right 1930s. How very nod-and-wink. How very driving-it-round-the-houses-to-avoid-a-direct-Jewish-reference. And how blatant does the combination of anti-Semitism and hypocrisy have to be to give off such a stench that someone calls a halt to it?

Staines and his pals have revealed their true colours. They’re totally out of order.
Posted by Tim Fenton at 13:33

Spastic; Relating to or affected by muscle spasm.
The offensive way of interpreting the word fits your narrative better though and also says a lot about the kind of person you are to propagate it in such way.

The shonky grammar is such a give-away, isn't it?

The word "Spastic" is loaded. Careful selection of one single definition of that word to suit the purpose of someone who doesn't have the bottle to identify themselves does not change that.

You've chosen the definition to suit your purpose. It's only loaded if you are looking for it to be loaded. You've simply chosen the side of the homonym that makes the person you are attacking look bad, when in reality Tim, it makes you look petty.
Don't let me pointing about your poor supposition, foil your plans to smear someone though. Tim, I mean that in the sense of preventing something from succeeding and not covering your plans in a thin sheet of flexible metal. I know you're prone to seeing things from your skewed point of view.

The word "Spastic" is loaded. That is loaded, *period*.

So are you 100% certain that he is making fun of the disabled?

"In the 1980s, the term spastic became a general insult, partially because of the Blue Peter programmes following the life story of Joey Deacon in an attempt to show disability in a positive light during the International Year of Disabled Persons. Consequently, the society changed to its current name on 26 March 1994, following a two-year consultation with disabled people and their families" (from Wiki)

Why The Spastics Society changed its name to Scope.