Unrest in the Middle East now includes another of those periodic flare-ups between Israel and its neighbours. Rockets have been fired into Israel; the IDF has bombarded Gaza. Nearly 80 deaths have been reported there, but none in Israel. 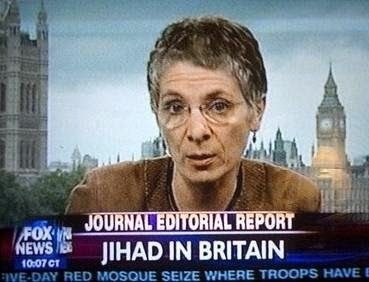 At times like this, voices of moderation are, sadly, few and far between. Instead, an old Zelo Street favourite has been sounding off: step forward Melanie “not just Barking but halfway to Upminster” Phillips, eschewing moderation in favour of good old-fashioned ranting and raving. 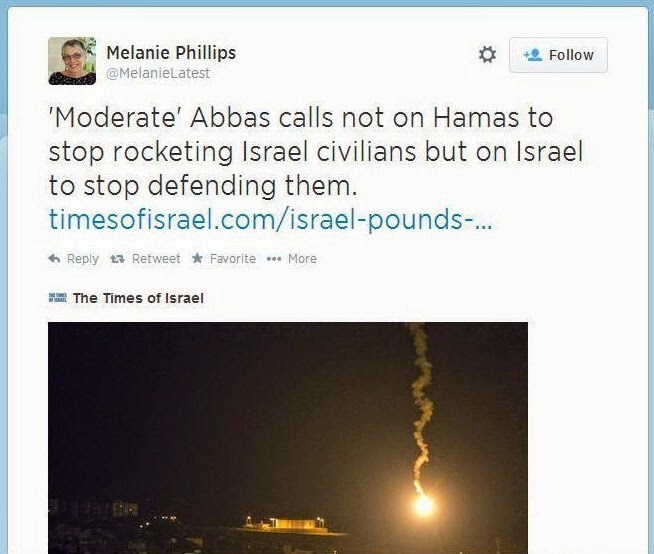 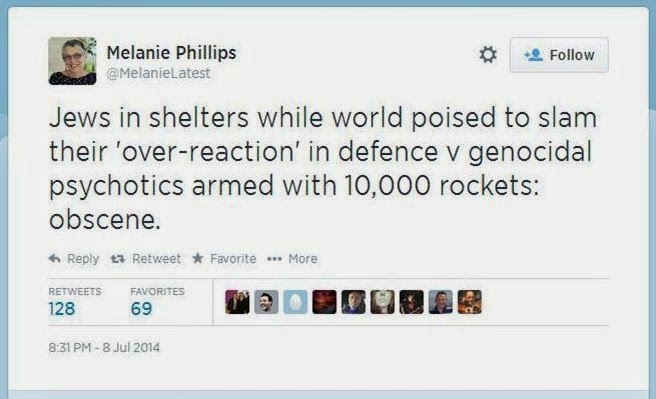 “‘Moderate’ Abbas calls not on Hamas to stop rocketing Israel civilians but on Israel to stop defending them ... Jews in shelters while world poised to slam their ‘over reaction’ in defence v genocidal psychotics armed with 10,000 rockets: obscene” she screamed, with true even-handed restraint. And, as the man said, there’s more. 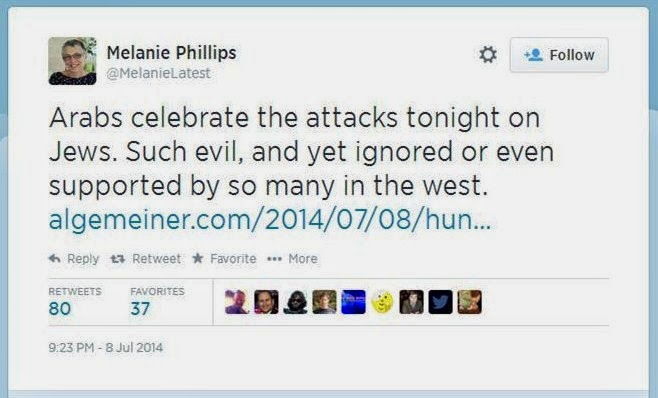 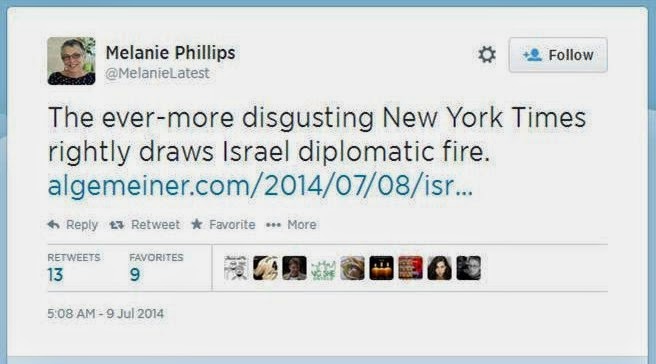 “Arabs celebrate the attacks tonight on Jews. Such evil, and yet ignored or even supported by many in the West ... The ever-more disgusting New York Times rightly draws Israel diplomatic fire”. Even-handed copy? Don’t you dare, Mel’s watching. 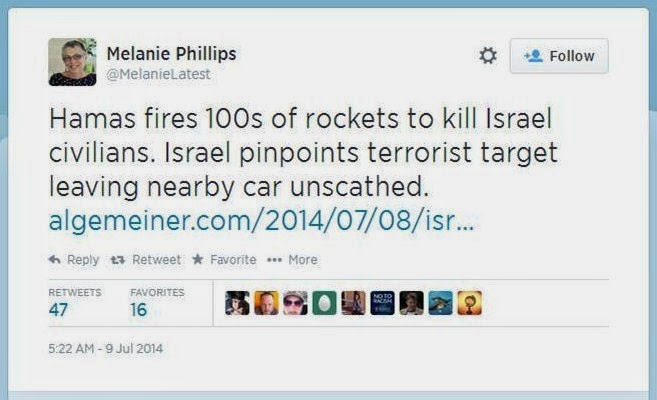 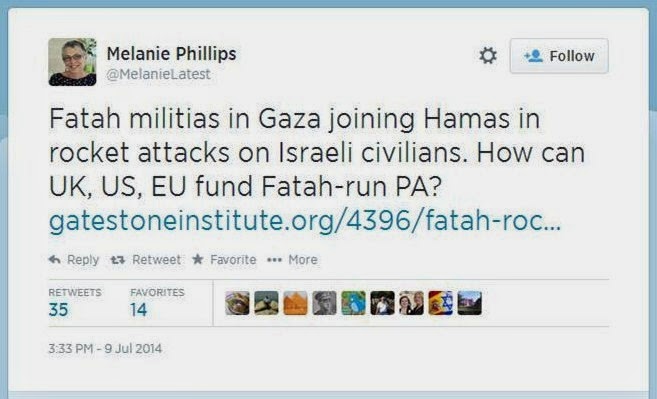 “Hamas fires 100s of rockets to kill Israel civilians. Israel pinpoints terrorist target leaving nearby car unscathed ... Fatah militias in Gaza joining Hamas in rocket attacks on Israeli civilians. How can US, UK, EU fund Fatah-run PA?” she howls, managing not to notice that no Israeli has yet been killed. 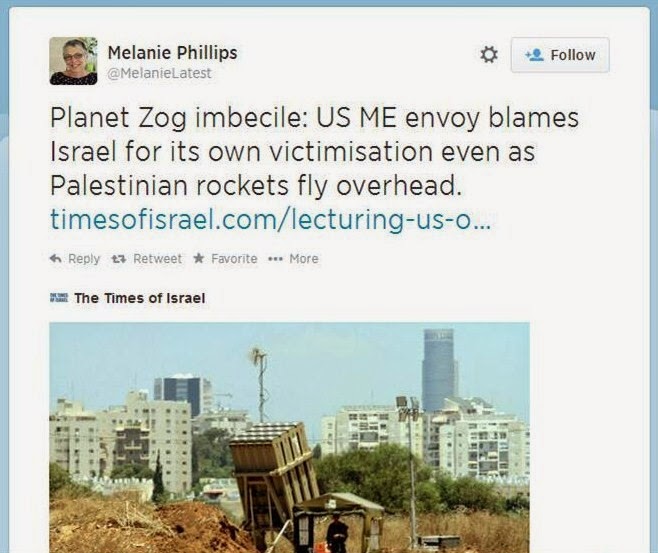 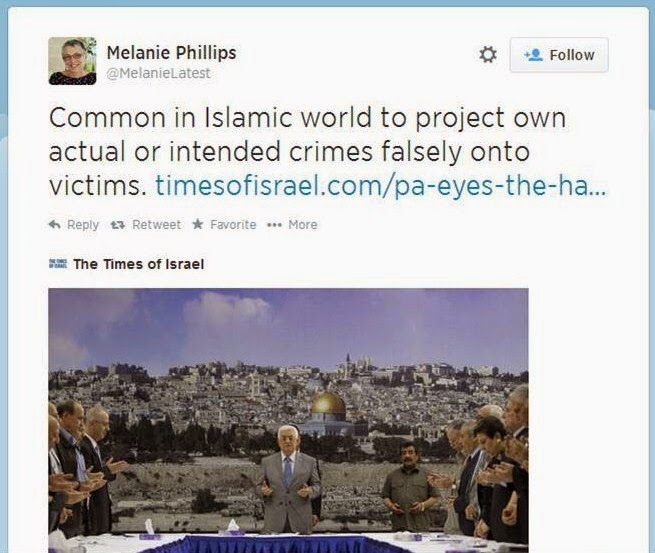 And the USA are rubbish too! “Planet Zog imbecile: US ME envoy blames Israel for its own victimisation even as Palestinian rockets fly overhead ... Common in Islamic world to project own actual or intended crimes falsely on to victims”. So no word on disproportionate response, collective punishment and the like, eh Mel? 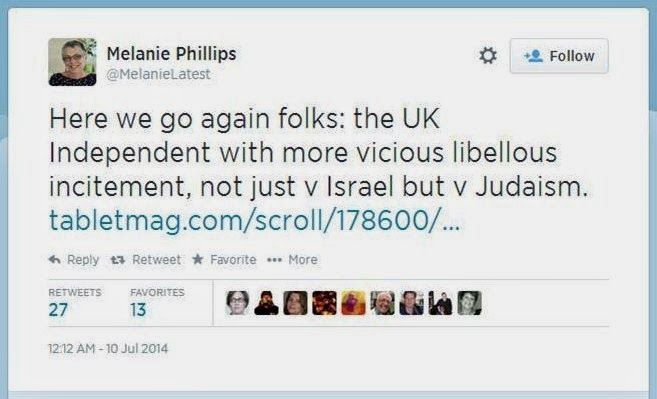 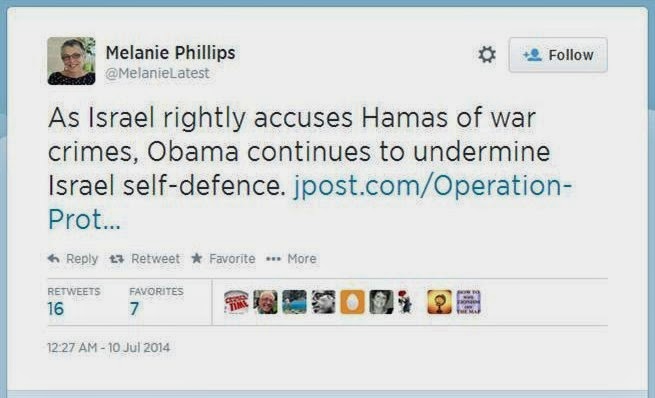 Don’t get her started on the British media! “Here we go again folks: the UK Independent with more vicious libellous incitement, not just v Israel but v Judaism ... As Israel rightly accuses Hamas of war crimes, Obama continues to undermine Israel self-defence”. That’s why he helped pay for Iron Dome, of course. 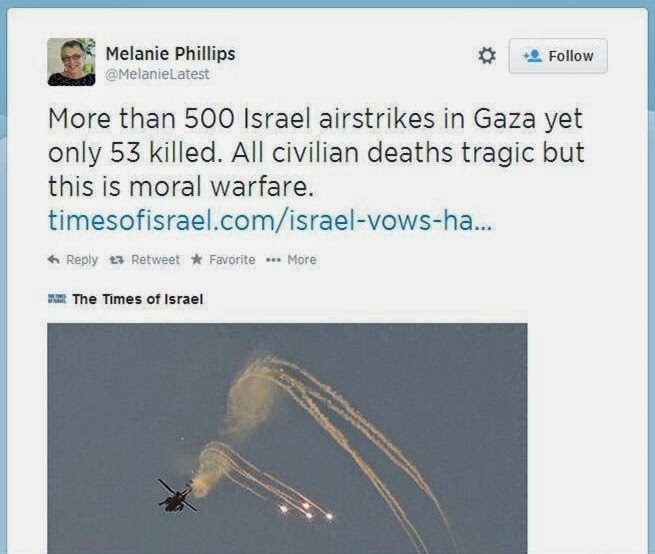 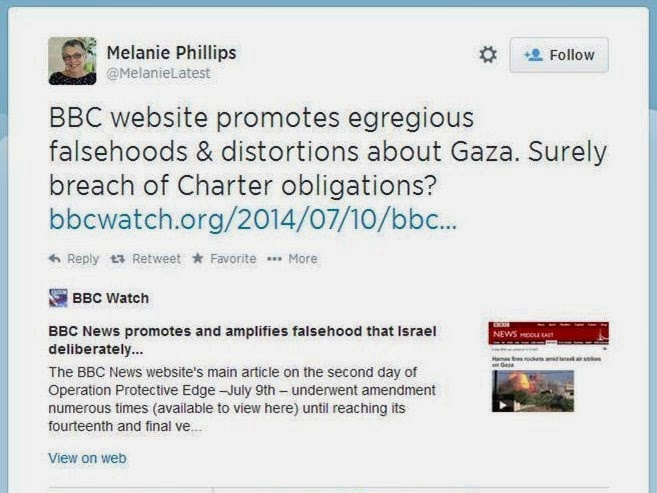 And those Palestinian deaths weren’t so bad: “More than 500 Israel airstrikes in Gaza yet only 53 killed. All civilian deaths tragic but this is moral warfare ... BBC Website promotes egregious falsehoods and distortions about Gaza. Surely breach of Charter obligations?” So she won’t want any more Beeb paydays, then.

The reality is that few people in the UK give a flying foxtrot who started what, but can correctly identify overreaction against a desperately poor group of people, and are appalled at their plight, however bad the activities of some of their number. Israel right now needs a Ben-Gurion, but has to make do with Netenyahu, who is not unadjacent to useless. And his cheerleaders aren’t much better. Hello Mel.
Posted by Tim Fenton at 10:23

An Israeli pinpoint strike managed to take out three sets of brothers watching football. Nary a terrorist nearby.

That may explain Mel's unhappiness towards the New York Times, then.

The fact that she has a tribune from which to spout this frankly supremacist & racist nonsense tells us all about how balanced our media is. There's no counterpoint to Mel but a few brave journalists who themselves have to weigh every single word.