Deception Of The Young TURCs – Verdict

The distress shown by the flannelled fool Henry Cole to yesterday’s mild grilling on Zelo Street was as significant as it was loud and petulant: there were five comments (two in person, and three via two sock puppets), disclosure of part of a personal email (that’s in the memory bank, Hen), and a Twitter meltdown where he made the mistake of using the same abusive term as one of those sock puppets.

And every word of that post stands: Cole performed a blatant act of deception when he suggested that cricketer Darren Gough had endorsed the so-called Trade Union Reform Campaign (TURC), and he, or one of his pals, appears to have deceived Gough himself. Moreover, he was revealed to not just be an advisor to TURC, but actually running the show. 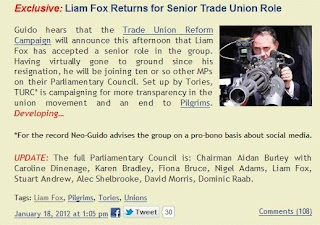 That last is not what he said on the Guido Fawkes blog on January 18: when talking up Liam Fox’s presence on the group, he said “For the record, Neo-Guido advises the group on a pro-bono [sic] basis about social media”. “Neo-Guido” is the typically pretentious term used on the Fawkes blog to refer to Cole. So what of the various Cole counter-claims and their veracity? 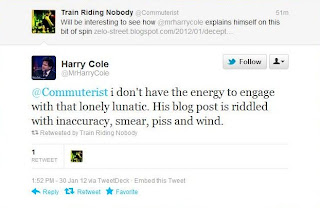 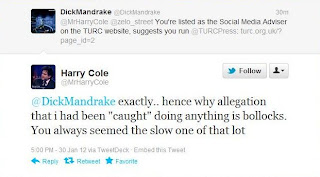 “I don’t have the energy to engage with that lonely lunatic,” moaned Cole. “His blog post is riddled with inaccuracy, smear, piss and wind”. So no denial, then. Following that came “Fenton blog is bollocks. As ever” (ditto). There was more “bollocks” as Cole lashed out at Dick Mandrake, plus the smear “You always seemed the slow one of that lot”. He riffed on that theme in his “real” comments, too.

Yes, someone bleating about being smeared was in the meantime happily making autism smears: “it’s like trying to have a conversation with Rain Man’s slightly less articulate cousin. Thank you for confirming you [sic] smears to be just that”. Then, rather later came an anonymous repeat of the “lunatic” jibe, with added “demented” for good measure. This merely confirmed the real identity of the commenter. 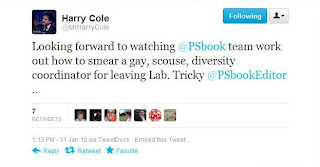 And the smearing while accusing others of it is not confined to his incoherent and petulant attacks on this blog: he made the accusation against Laurence Durnan of Political Scrapbook without waiting for the latter to even reply to Cole’s latest minor Westminster Village “news”. This was followed by using the S-word against someone who had committed the crime of retaining their sense of humour.

What we have in Henry Cole is not just another personification of Olbermann’s Dictum (“the right exists in a perpetual state of victimhood”), but also someone who is fundamentally dishonest, but cannot and will not do other than spin, rant and dissemble rather than admit to having a problem. And those thus afflicted inevitably suffer the same fate: they ultimately lose credibility and fade from view.

That’s not a very bright future, but if he wants it that way, who am I to stop him? 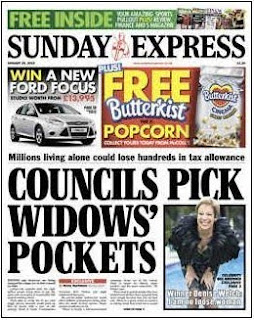