Another Mail On Sunday Climate Fraud 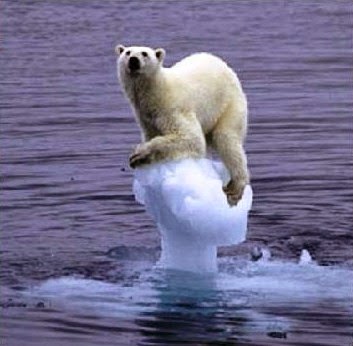 And then the name on the by-line came into view: yes, once more, David Rose is spinning for the climate change denial lobby. The piece is expertly crafted, but the cracks in Rose’s logic are glaringly obvious from the start. The result is that his reputation as an investigative journalist goes further down the pan, as he sells his soul to the Rothermere press in exchange for more of those pieces of silver.

Here’s what Rose tells readers: “America’s National Snow And Ice Data Center, which is funded by Nasa, revealed that ice around the southern continent covers about 16million sq km, more than 2.1 million more than is usual for the time of year ... It represents the latest stage in a trend that started ten years ago, and means that an area the size of Greenland, which would normally be open water, is now frozen”.

Sounds convincing at first, doesn’t it? However, and in this case there is a significantly sized however, note that Rose’s headline talks of “sea ice”, whereas the sub-heading on computer models omits the word “sea”. Why? Ah well. There is indeed an increase in sea ice around Antarctica. But this is more than offset by a decrease in Antarctic land ice, and other losses around the globe. 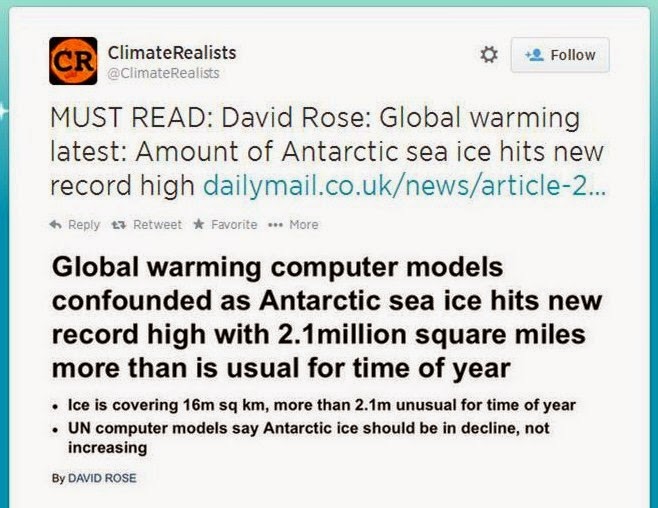 Simples. Much of that declining land ice falls into the sea (fx: Ta-Da!). And, as can be seen, the decline elsewhere does not merely balance the increase in Antarctic sea ice, it massively exceeds it, to a factor of, oh, round about 40. But that has not stopped Climate Realists and the Global Warming Policy Foundation from enthusiastically taking to Twitter to proclaim Rose’s rubbish as “must read”. 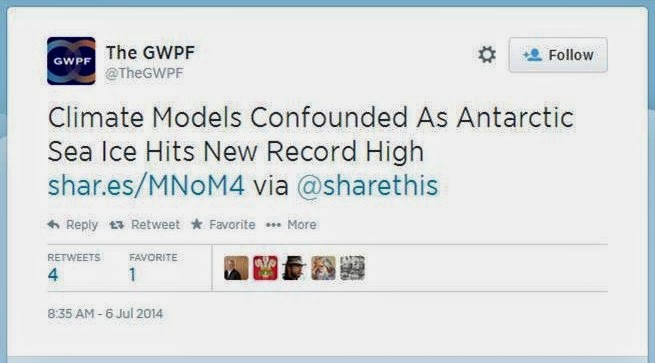 Meanwhile, the MoS has Andrew Montford telling readers “It’s politics, not science, driving climate change mania”. That’s the author of the Bishop Hill blog, another haven of denialism. Rose, on the other hand, has not advertised his latest effort on Twitter. Perhaps he is too embarrassed not only at the shameless manipulation of figures, but also at the knowledge that it can be picked apart so very easily.

David Rose is getting paid. But at the cost of any credibility he had left. Sad, really.
Posted by Tim Fenton at 13:04

I did laugh. The Rose and Montford pieces were such transparent tosh that the DM removed them from its online front page after a few hours. Always a sign that it knows it's got it wrong. I understand that the quote from go-to sceptic scientist Judith Curry was an old one too.

All a bit of an amateurish effort really.