East London – A Bridge Too Far

Only very rarely does the Evening Standard, aka the London Daily Bozza, come to the same conclusion as those who write for the deeply subversive Guardian on transport developments in the capital. But on the subject of a new crossing of the Thames in east London, both papers are quite sure that this is A Very Good Thing. And both of them are equally wrong to believe so. 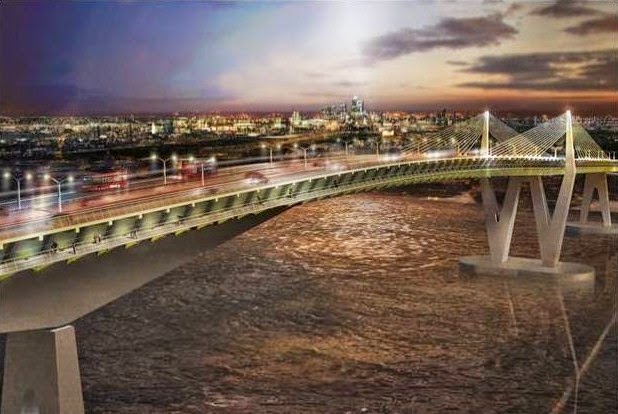 The new crossing would be “between Thamesmead and Beckton at Gallions Reach, linking Greenwich and Newham”, and the justification “There are 22 crossings west of Tower Bridge, but only two to the east – where more than half of London's population already lives, and where most of the growth in housing and jobs is going to come from over the coming decades. The current infrastructure is at breaking point, relying on the bottlenecks of the Blackwall and Rotherhithe tunnels”.

This conveniently ignores the recently-built crossings of the Jubilee Line and DLR, which is all you need to know: the Standard shamelessly tries to pass the new bridge off by telling “Revealed: £600m plan for new bicycle friendly bridge across the Thames in east London”, but we all know it’s primarily another road crossing.

In fact, it is a dual carriageway road crossing, with a cycle path added as a sop to more environmentally sustainable transport. There is no light rail provision. And, something both the Guardian and Standard have missed, no idea of how all the inevitable traffic generated is going to be distributed using existing road networks north and south of the river without creating yet more congestion. 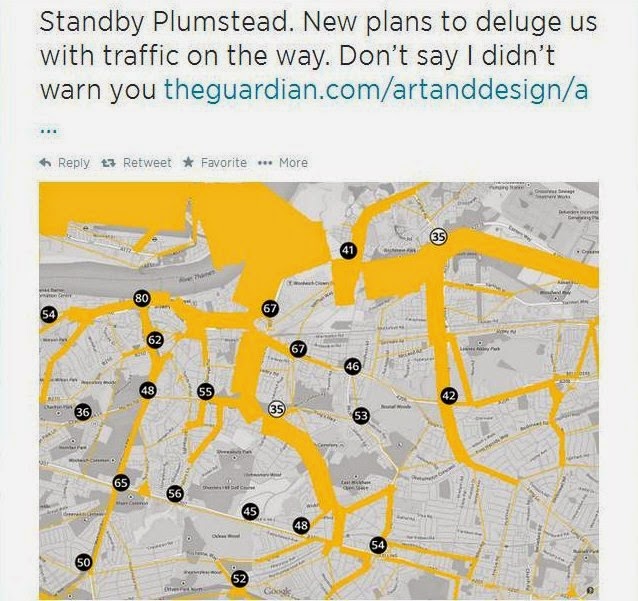 ... because the reality is usually rather different

At least on the north side there is the DLR: Thamesmead doesn’t even get to have a non-road alternative before being swamped by road vehicles. How bad this could be has been hinted at by Stewart Christie, who has shown the kinds of additional traffic flow the new bridge would create around its south side. The Guardian is too busy admiring the design; so, it seems, is the Standard.

Both papers missed the obvious corollary: look at the nearest dual carriageway crossing – the Blackwall Tunnel – and see what kind of distributor road network that needs. Now look at the new crossing, and see what is missing – the kind of distributor road network the Blackwall Tunnel has. And even with that network in place, the congestion it generates is horrendous.

No consideration appears to have been given to a cycle and pedestrian crossing – it would cost a fraction of the price – with perhaps provision for light rail in the future (tramway if you prefer). Every time, the road lobby comes up with a scheme to suit Itself Personally Now and the politicians get taken in: only later does the penny drop and realisation sink in that more roads in cities invite yet more traffic.

And it doesn’t help that journalists are unable to see this for themselves.
Posted by Tim Fenton at 17:28

It is shameful that The Guardian, a paper justly proud of its reputation for investigative journalism, should offer its readership a piece that is devoid of research and provides little more than a reiteration of the LCCI's own announcement.

Quite apart from the fact that no-one living south of the river actually WANTS to be linked to Essex in the first place.