Guido Fawked – A Sketch Too Far

Gratuitous abuse directed at Mil The Younger is not a new thing: this is, after all, the stock-in-trade of countless Z-list pundits across the right, from the whole range of newspapers to ostensibly serious magazines to online publications to the blogosphere. One might have thought the market to be near saturation, and the scope for scraping the barrel exhausted. 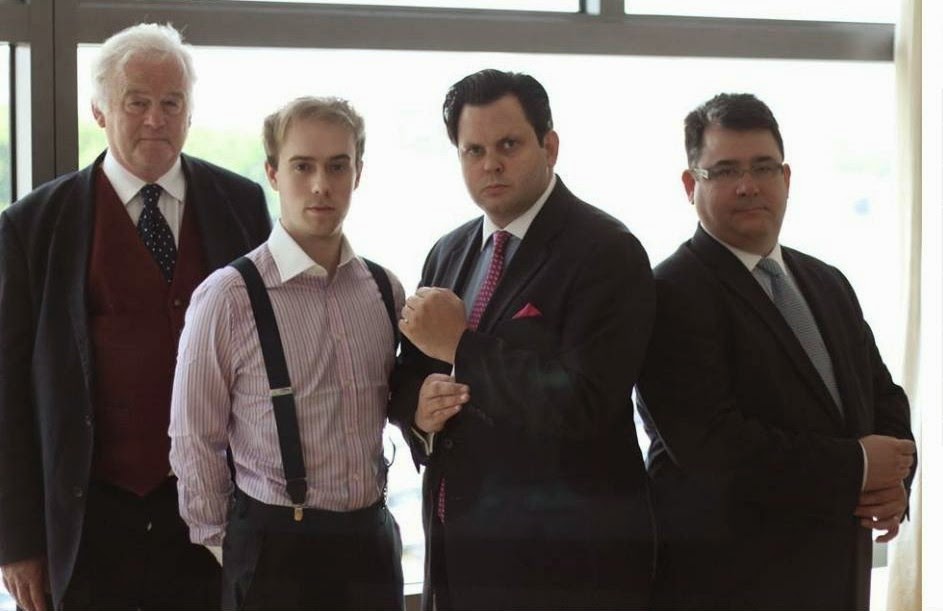 But that thought would have been misplaced, after the perpetually thirsty Paul Staines invited otherwise redundant ex-Independent sketch writer Simon Carr to join his obedient rabble. Staines told that “Simon is a great parliamentary sketch writer and he's been around for absolute [sic] ages. We have always been pretty viscious [sic] and Simon isn't afraid of upsetting anyone”.

So what is Carr – the one at left in the photo above, who looks like a refugee from The Addams Family – giving The Great Guido? Just how “vicious” is this titan of the retelling? And the answer is, not very – unless you rate 1960s playground abuse. And forget any adherence to the real world: “Oh, it’s such a time to be a Tory. The best reshuffle in modern times has put the party onto an election-winning footing”. 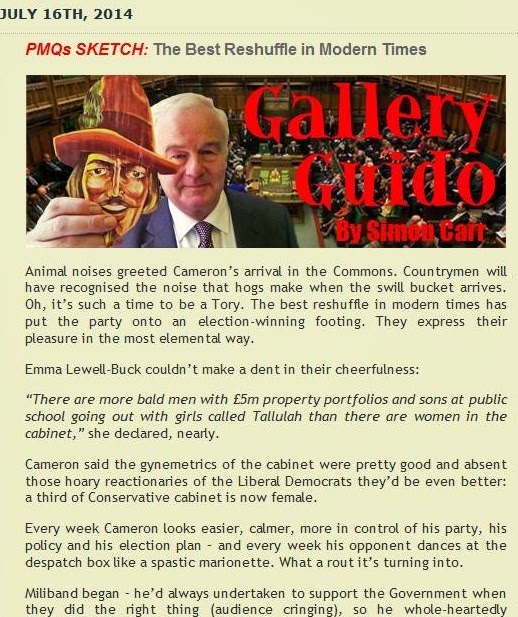 No, don’t laugh: his boss is now taking his orders from CCHQ, remember. And doesn’t Si let us know it: “Every week Cameron looks easier, calmer, more in control of his party”. Of course he does, and if I had wings, why, I’d just off and fly. But then he tries “vicious”, and it all goes wrong. Miliband, he tells, “dances at the despatch box like a spastic marionette”. Have a think about that.

“Spastic”. That’s so low, it doesn’t get out of the sewer. And then we have “marionette”. Ed Miliband is Jewish. Hello Simon! You do know that calling “marionette” at Jewish people is a no-no, don’t you? Whatever – he clearly thinks that yelling “spastic” is fine, so he’s hit bedrock already. The only problem for Staines and his pals is that he’s clearly still digging. 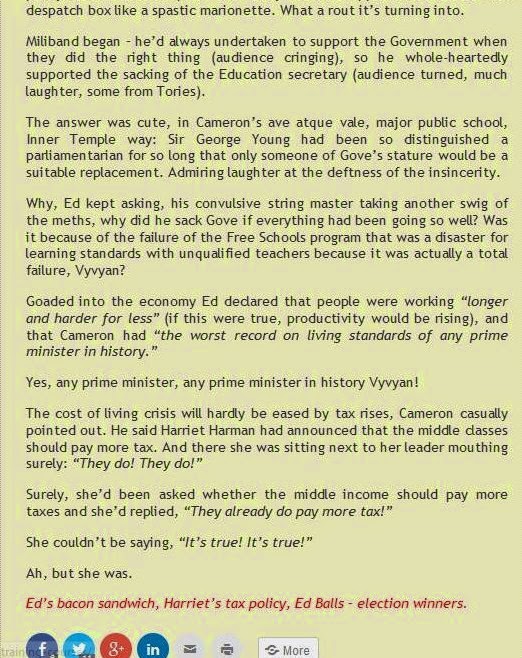 Perhaps he can raise the tone – how about that lame excuse for binning “Oiky” Gove? Ah yes, this was delivered in “Cameron’s ave atque vale, major public school, inner Temple way”. Oh I say, that’s so toweringly intellectual I bet he could almost soil himself! Gosh, he’s just too good for mere sketches! Before we know it, he’ll be slipping big words like “corrugated” and “duffle-coat” into his musings!

But this was only a side-show: soon it was back to the abuse, as he went back to calling “marionette” at a Jew, talking of Miliband’s “convulsive string master taking another swig of the meths”. Hello again Simon! You do know that your boss has a criminal record, don’t you? And you do know how he came by it? What a combination: plastic intellectual and playground bully tribute act.

No wonder the Independent binned Simon Carr. Because it is. And he isn’t.
Posted by Tim Fenton at 09:56

"You do know that calling “marionette” at Jewish people is a no-no, don’t you?"
No, I didn't.

Why is this a no-no?

Murdoch and his supporters bringing US style election negative propaganda to UK shock? Always helps when the policies don't work.

It could get very nasty especially as most of the media are gunning for those "lefties and Guardianstas" that have been attacking them for their, er, nastiness.

I call by GF occasionally, not so much to read the sheer, poisonous nonsense of the blogs, as to marvel at the vicious, ignorant spite in the comments sections; car-crash entertainment from half-brain 6th formers. 4% trust rating? I ALWAYS trust it to deliver unintentional hilarity.

This is probably very stupid of me, but I've never heard the marionette/Jewish thing before - what's the significance of that particular word?

Simon Carr has form on this sort of thing - even when he was at the Independent, he had a worrying tendency to repeatedly describe Ed Mili with words like "swarthy" and vizier like. I seem to remember there was a lot of reference to his dark eyes and dark features.

I'm not even jewish and wasn't that aware of common anti-semitic cliches, but even back then the constant refrain of "swarthy" set off a LOT of alarm bells...
..the thing is, he's always so insidious with his bigotry that it's hard to call him out on it, so kudos to you for doing so.