Many teachers and other public sector workers will take industrial action next Thursday. The withdrawal of labour, one of those rights that has been fought for in the past, is not a decision taken lightly: those taking part “are protesting at performance-related pay, pension cuts and the running down of public services”. If no-one will listen to them, there is little alternative. 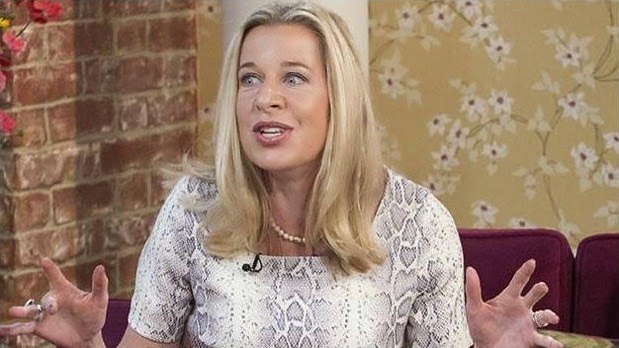 But, for some parents, this will mean disruption to their schedules as many schools will close. And one school closure appears to be happening in an area not unadjacent to semi-professional motormouth Katie Hopkins, who is a most unhappy bunny. The idea that someone may exercise their right to strike if it affects Herself Personally Now has rendered her not merely indignant, but incoherent with rage. 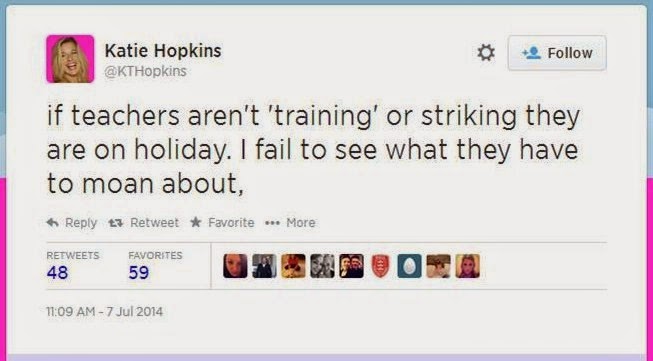 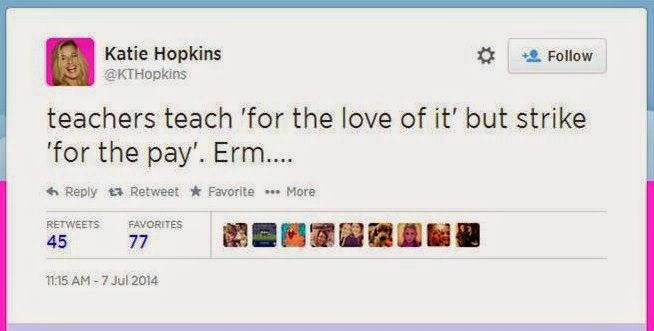 “If teachers aren’t ‘training’ or striking they are on holiday. I fail to see what they have to moan about” she moaned, following that with this magnificent slice of projection and false assertion: “teachers teach ‘for the love of it’ but strike ‘for the pay’. Erm”. Perhaps one cannot live on the reflected love of all those appreciative parents alone, eh Katie? 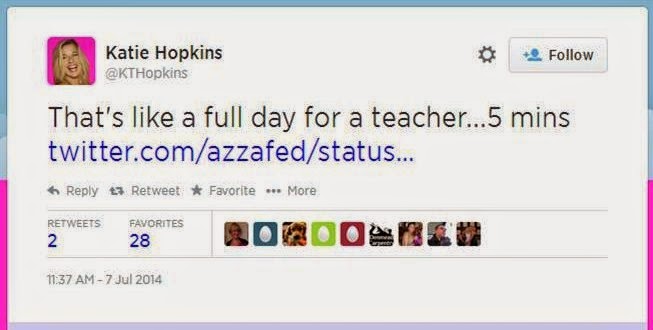 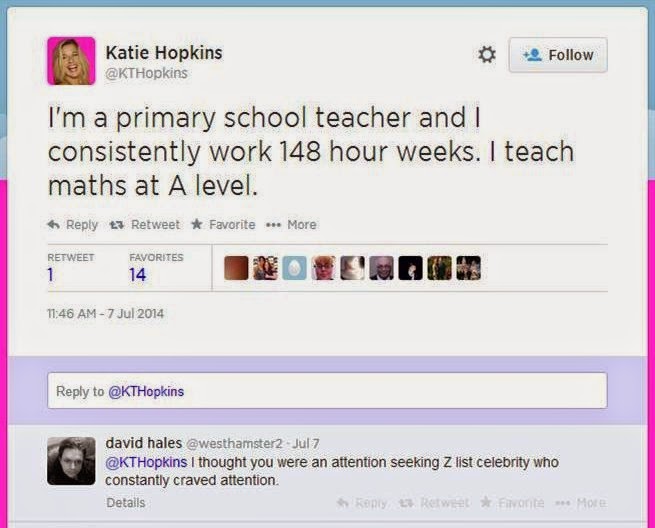 But then frustration sets in, because it clearly Is Just Not Fair. So she turns to abuse for her next salvo: “That’s like a full day for a teacher ... 5 mins”. And in order to win friends and influence people even less, she doubles down with the mocking “I’m a primary school teacher and I consistently work 148 hour weeks. I teach maths at A level”. Fun to come at the school gatey, Katie. 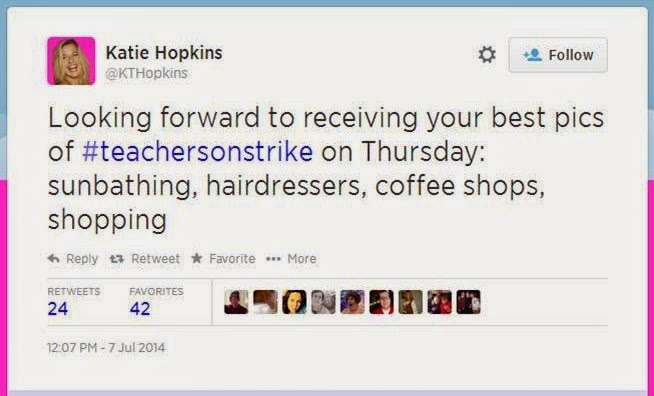 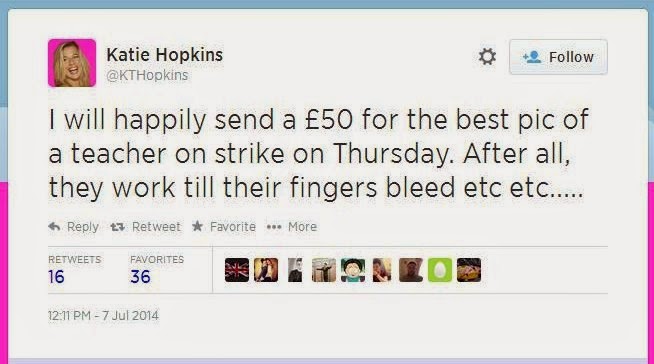 Then the Sun columnist comes to the fore, with a threatening and shaming touch: “Looking forward to receiving your best pics of teachers on strike on Thursday: sunbathing, hairdressers, coffee shops, shopping”. She’s prepared to pay: “I will happily send a £50 [sic] for the best pic of a teacher on strike on Thursday. After all, they work till their fingers bleed etc etc”. 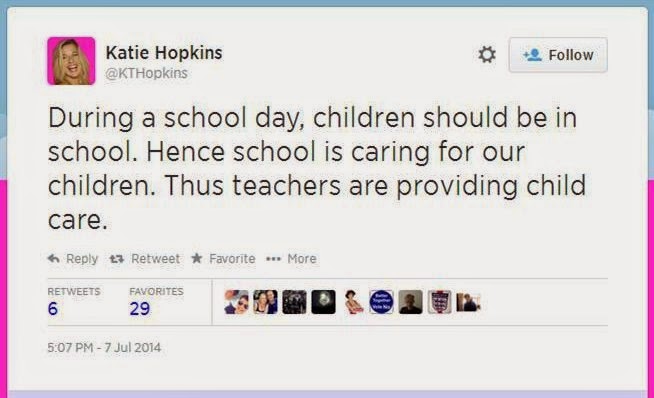 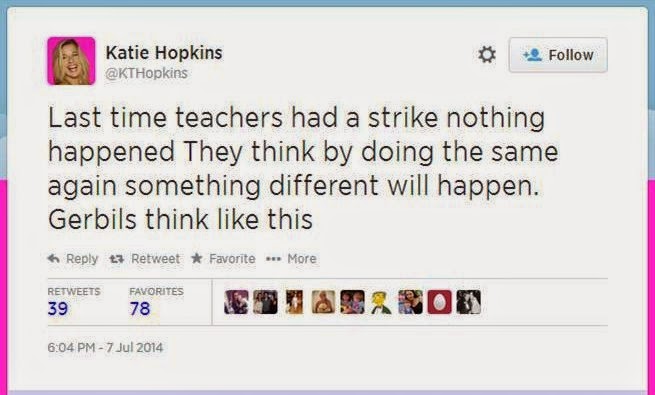 There then follows a moment of contemplation: “During a school day, children should be in school. Hence school is caring for our children. Thus teachers are providing child care”. Nowt gets past Katie. But then it’s back to the abuse: “Last time teachers had a strike nothing happened. They think by doing the same again something different will happen. Gerbils think like this”. More smiles at the school gates, Kates. 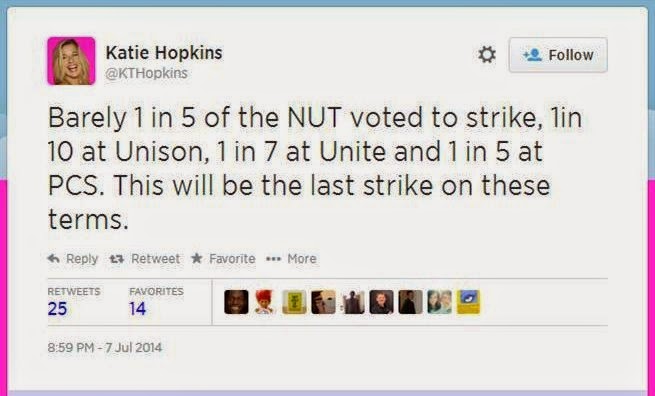 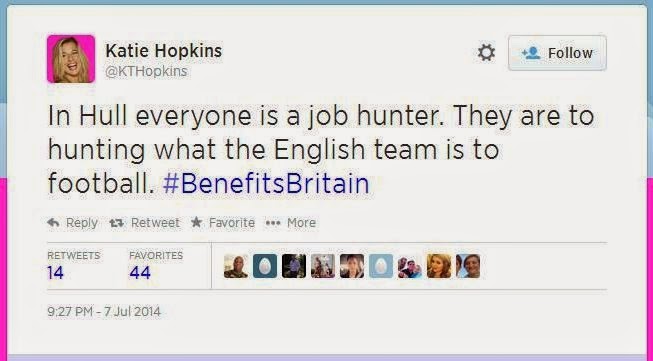 And back to the moaning: “Barely 1 in 5 of the NUT voted to strike, 1 in 10 at Unison, 1 in 7 at Unite and 1 in 5 at PCS. This will be the last strike on these terms”. So says someone so credulous that they believe Francis Maude. Then it’s rant over, and new rant at someone else: “In Hull everyone is a job hunter. They are to hunting what the English team is to football”. Whole unions, professions, cities – alienate the lot, eh?

Who cares about them? Katie Hopkins certainly doesn’t. It’s all about her.
Posted by Tim Fenton at 17:24

One of those times that brings Linda Smith to mind (on Manning or Hamilton):
I don't really like you saying his name, because it gives him the oxygen of publicity and I'm not happy with him having the oxygen of oxygen.

Just as I think she must realise how ridiculous she is there's further proof of her idiocy.

I look at Hopkins for comedy value. BTW I am 100% Fire fighter supporter. I know you like exclusives so tomorrow check out Court Of Appeal 10.30 am Court 8 The Groovy Gang. It touches on Daniel Morgan case.