The obedient hackery of the legendarily foul mouthed Paul Dacre is in full Corporal Jones mode today as readers are told “The great vacuum cleaner stampede: Panic buying hits shops as deadline looms for Brussels ban on high-powered machines”. Yes, the Daily Mail can congratulate itself for precipitating a needless panic among its readers, although manufacturers and retailers will be more than happy. 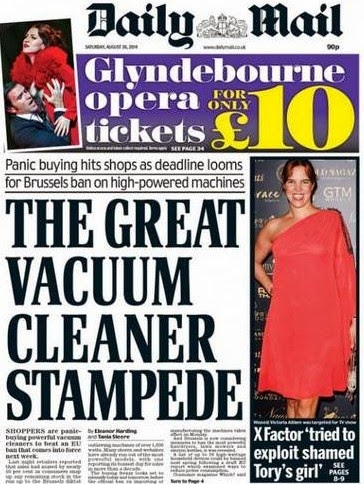 While the Mail fraudulently tells “Brussels diktat will prohibit companies from manufacturing or importing vacuum cleaners that are above 1,600 watts”, we already know that the new regulations are anything but a diktat, as the UK voted for them. And the Dacre doggies once again mistake motor power as the sole criterion of effectiveness. A short history lesson is in order.

Twenty years ago, vacuum cleaners, no matter how powerful their motors, were almost universally crap. Sure, when you replaced the bag, they sucked up dust for a few trips round the house, but then the bag got coated with particles that clogged it up, and you ended up going through bags at a ridiculous rate, just to get the thing to work as advertised. And then James Dyson arrived.

I can still remember getting back from Argos with my Dyson DC02 – yes, it’s old enough to have been manufactured in the UK – and marvelling not only at the consistent suction, exactly as it said on the box, but also at the sheer power of the thing. If you hadn’t detected a loose thread in a carpet, you soon found out as the Dyson pulled at it. The suction power was phenomenal. 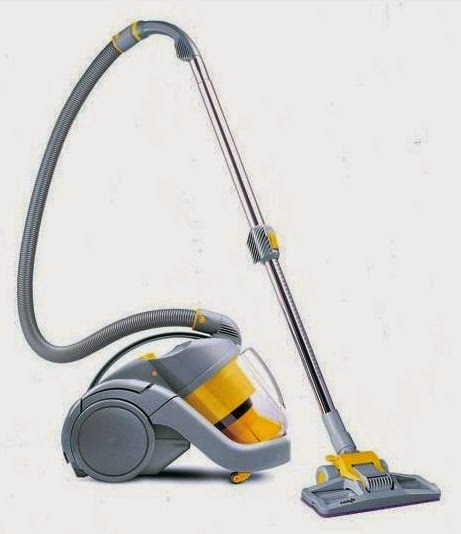 Yet Dyson have never sold a vacuum cleaner that would be banned under the new EU standards. Have a think about that. The new maximum is 1600 watts, yet Dyson, the manufacturer that single-handedly dragged vacuum cleaner technology kicking and screaming into the 21st Century – look at how many of today’s machines look like 1990s Dysons – never needed more than 1600 watts.

In fact, Dyson are already using smaller motors for their current range, with full size uprights having 1400 watt motors, and cylinder models 1300 watts. All that those 2000 watt plus gizmos do is increase your electricity bill. So why should anyone buy one? Ah well. The Mail is doing the industry one big favour in whipping up a false panic: this enables them to clear out old stock.

Vacuum cleaner manufacturers have known for some time that the new standards would come in from next month. Thus they all have new – and more efficient – models ready to hit the stores next week. The last thing they, and retailers like Argos, want is to be saddled with lots of unsold, overpowered and unwanted machines. The Mail’s panic has made the undesirable briefly desirable.

Yes, Mail readers, your paper has had you for mugs. No change there, then.
Posted by Tim Fenton at 13:15

I await next week's Mail Reader offer - phone a premium rate number for a chance to win an inefficient BANNED BY EU Vacuum Cleaner and a year's supply of dust bags. Plus a free "traditional" light bulb for every entrant.

The alleged proposal to ban powerful electric kettles makes no sense to me. There's little or no scope for making them more efficient.
Not boiling more water than you need is the answer.

I do think Brussels are guaranteed to foster skepticism with this one. Tackling the waste of energy in the home is positive but they are taking away choice by limiting vacuum cleaner motors. This plays into the libertarian mindset. Better to tax motors over 1600 watts, and avoid the nanny state accusations

Yeah and them damn non-elected bureaucrats in Brussels brought in so-called 'energy standards' for domestic boilers and the old types have been replaced by so-called 'combi boilers' that makes space in airing cupboards as immersion heaters are no longer required and also use less gas. Damn you EU and your energy and space saving diktats (shakes fists with impotent rage in Brussels' general direction).

There was a news item on BBC news Sunday night about how it will take you longer to vacuum the carpet due to EU rules. They then showed someone panic buying a vacuum cleaner (which was a vax air 3 which is only 1300 watts anyway, I know I've got one) so no panic neccessary. There was a comment about how this is only a minor change but the overall tone was the EU are telling us what to do again. I expect better from the BBC not tabloid type stuff.