So much of modern politics is inherently cynical and cheap: those displaying the slightest shred of principle usually get missed in the unending 24-hour churn of the news cycle and forgotten soon afterwards. And, as for Government ministers acting out of principle rather than party loyalty, well, that kind of behaviour is in the Rarer Than Hens’ Teeth category. Well, usually. 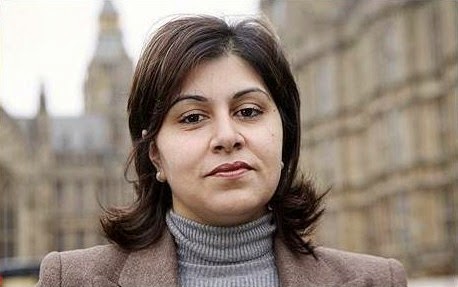 This state of affairs was interrupted earlier this morning as Sayeeda Warsi, senior Foreign Office minister, tendered her resignation to Young Dave over the Government’s policy, or perhaps that should be lack of it, over what is happening in Gaza. “With deep regret I have this morning written to the Prime Minister & tendered my resignation. I can no longer support Govt policy on #Gaza” she Tweeted. 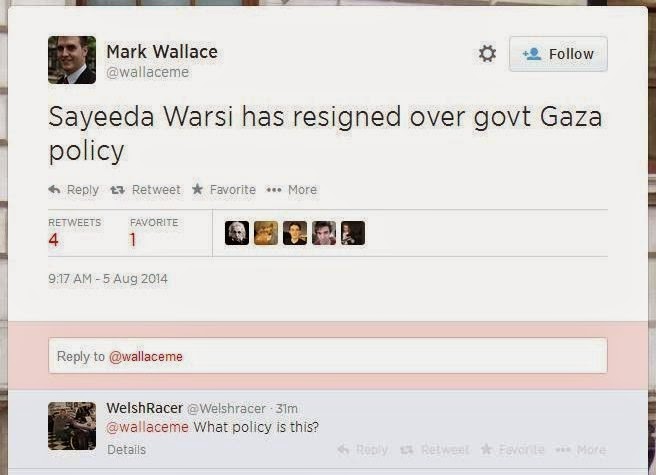 As the Guardian noted, “Warsi has been increasingly critical of Israel’s behaviour. She recently tweeted: ‘Can people stop trying to justify the killing of children. Whatever our politics there can never be justification, surely only regret’”. But her Government dithered: “the prime minister’s spokesman refused to say if Israel was behaving disproportionately or doing enough to prevent civilian casualties”. 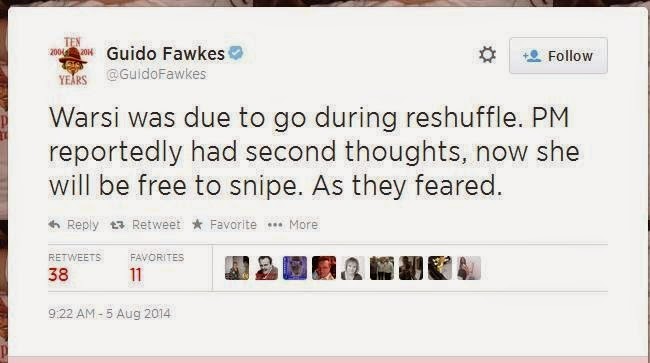 So she decided that enough was enough. This, of course, could not be expected to be taken at face value: for some, there had to be a suitable application of spin, especially given her religious affiliation. Few could be expected to play the story as straight as Mark Wallace at ConHome, who observed factually “Sayeeda Warsi has resigned over Government Gaza policy”. 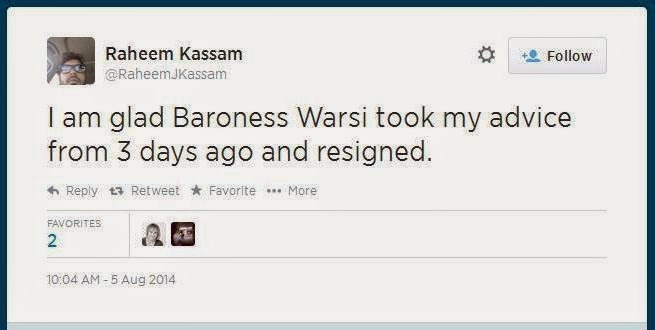 Especially as there was a chance to burnish credentials and put the boot in, which was the stance of the perpetually thirsty Paul Staines. “Warsi was due to go during reshuffle. PM reportedly had second thoughts, now she will be free to snipe. As they feared”. Strange that he waited until now to share that gem, eh? Elsewhere, Raheem “Call me Ray” Kassam used the news to play “look at me”. 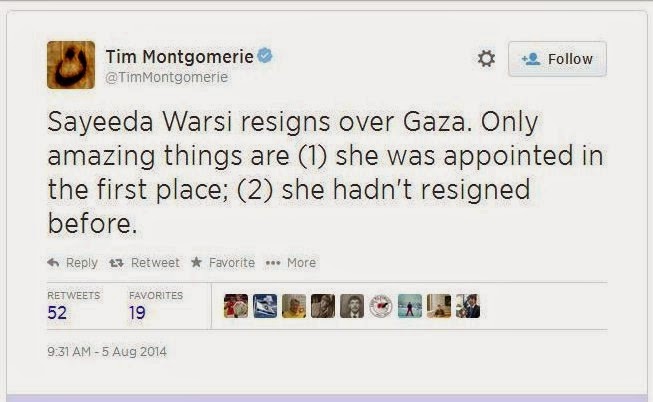 “I am glad Baroness Warsi took my advice from 3 days ago and resigned” he Tweeted. But nobody who matters had been looking then, and the same is generally true now. Then there was the truly snarky tone struck by the serially clueless Tim Montgomerie: “Sayeeda Warsi resigns over Gaza. Only amazing things are (1) she was appointed in the first place; (2) she hadn’t resigned before”. 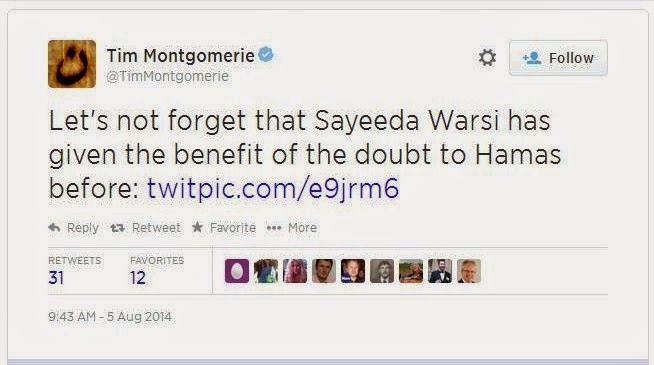 So we can see the line the Murdoch hacks will be taking, then, with its long and illustrious record of giving followers of The Prophet a fair press. And, just in case you hadn’t got that, Monty had another kick: “Let’s not forget that Sayeeda Warsi has given the benefit of the doubt to Hamas before”. Yes Monty, that would be the elected Government of Gaza. Or perhaps those elections didn’t count?

Sayeeda Warsi shows principle and courage. Pundits are baffled. No change there.
Posted by Tim Fenton at 10:55

Why did she wait until the IDF pulled back to the border, 1800 Palestinian dead and Dave away on holiday?

On today's World at One, I heard Tim Montgomerie suggest that, in the past, Sayeeda Warsi had "libelled the entire middle class". It doesn't work figuratively and taken literally is nonsense. You'd think someone in his position would know what libel is.