Former Screws stalwarts Jules Stenson and Neil “Wolfman” Wallis have been charged with an alleged conspiracy to hack phones. The alleged conspiracy was “with former News of the World editor Andy Coulson, five other journalists from the paper, private investigator Glenn Mulcaire and ‘other persons unknown’ to illegally intercept voicemail messages”. 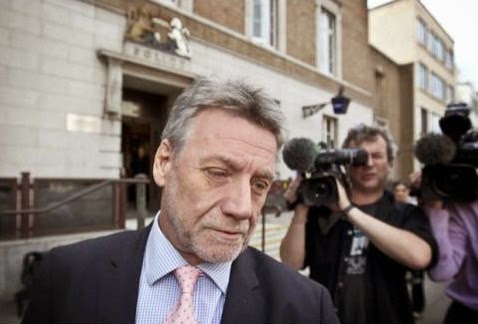 Wallis was not backward in coming forward with a suitably victim-playing response: “I am devastated that more than three years after my initial arrest, this has been brought against me. My family and I have already paid a huge price from the police’s very public attention”. There is something in this: he had already been bailed for around two years before a decision not to charge him. But there was more.

“Perhaps it is inevitable that after being such an outspoken critic of the collateral damage and pain caused by this endlessly vindictive and enormously costly investigation the ire has been turned on me for something that occurred at News International which I was not party to and have always said was wrong. Sadly, legal reporting restrictions prevent me commenting further on this sad day”.

And from that point there has been little comment, not even from the most outspoken of pundits. Nor will there be any further interventions on this blog until the forthcoming trial has concluded: as with the previous hacking trial, we know the contempt laws sufficiently well to keep schtum. There is also the need to give Wallis and Stenson a fair trial – as with their former colleagues.

This point of view has been, at least by implication, endorsed by the usual suspects: nothing so far from Richard Littlejohn, Rod Liddle, Kevin Maguire, Andrew Pierce, or even Quentin Letts (let’s not). But, as with the early days of the first hacking trial, someone – and perhaps her paper – thinks she’s above that sort of thing. Yes, it’s another self-promoting rant from Louise Mensch. 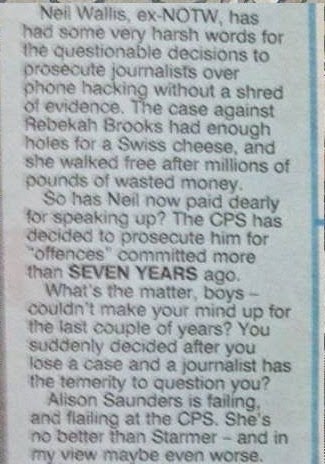 And I do hope the Sun’s lawyers legalled this one: “So has Neil now paid dearly for speaking up? The CPS has decided to prosecute him for ‘offences’ committed more than SEVEN YEARS ago. What’s the matter, boys – couldn’t make your mind up for the last couple of years? You suddenly decided after you lost a case and a journalist has the temerity to question you?” She has previous here, too.

As Jon Stewart might have said, two things here. One, they didn’t lose the case against Coulson and several others, and they are the ones on the charge sheet alongside Wallis and Stenson. And two, charging depends on a number of factors, none of which I’m going to go into here. And I’m not going to go into what information Ms Mensch may not be party to. Because some of us want to see a fair trial.

In the meantime, some of the rest of us would be well advised to put a sock in it.
Posted by Tim Fenton at 13:50

Bit sexist isn't it? I thought the new CPS leader, Alison Saunders, was a woman?

Does UberMensch Troll know something we don't?

Ms Bagshawe seems to be forgetting that, not long after the alleged offences took place, Neil Wallis actually worked for the Met (two days per month at £1000 per day). Neil Wallis also appears to have been seeing socially senior police officers such as Yates, Stevens and Stephenson. The seven year delay is mainly accounted for by the fact that Yates spent a mere eight hours deciding no further investigation was warranted to contradict the News of the World's 'one rogue reporter' story?

Wallis worked for the Met shortly after Paul Stephenson became Commissioner (January 2009), which was after Ian Blair's "resignation". Stephenson resigned in July 2011 as Commissioner as the result of speculation regarding his connection with Neil Wallis.

By the way: shouldn't someone have a word with Boris Johnson about Blair's "resignation"?