As this blog has observed recently (see HERE and HERE), the arrival of Uber on the streets of London has been gleefully painted by all those right-leaning Clever People Who Talk Loudly In Restaurants as the entry of a plucky underdog, a David taking on the Goliath of black cabs and their trade association, of “disruptive technology” about to sweep away an archaic regulatory regime.

What Uber does not give you in London

We could observe soundbite generating supremo Christian May of the IoD telling of “Analogue regulations in a digital age”, with his pal Raheem “call me Ray” Kassam, now part of the batshit collective that is Breitbart London, warning “How cabbies want to restrict customer choice”, although he later discovered the limitations of calling up Ron Hopeful and his Prius. 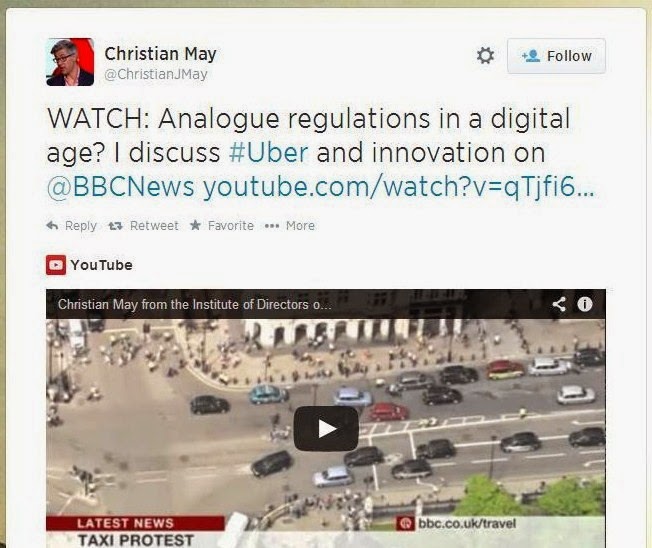 Behold a bringer of meaningless soundbites 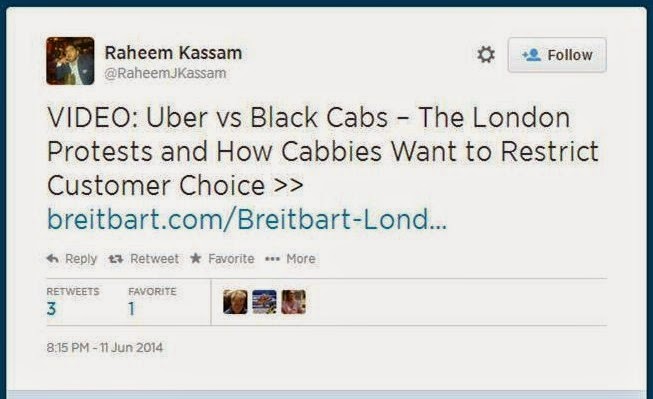 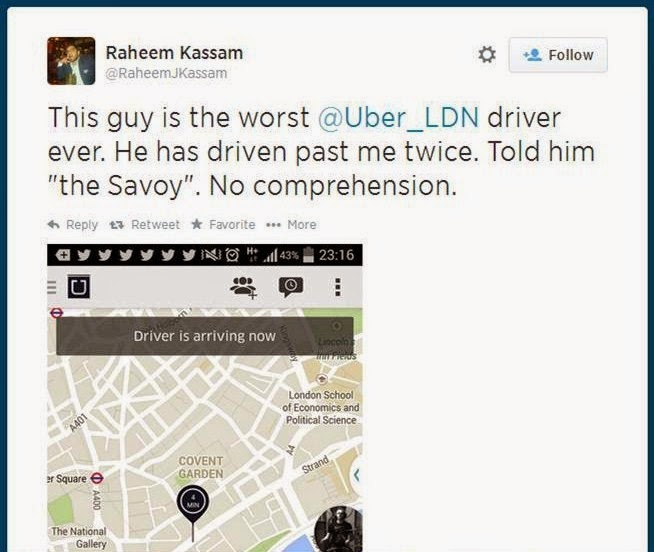 And, if there is the excuse called “technology” in the vicinity, there is also Willard Foxton to chip in his ninepence worth: “London’s taxi drivers are the new London Underground drivers – going on strike over new technology”. Those driverless Tube trains never did appear, did they, Willard? They won’t appear any time this decade – and most likely not any time in the next. 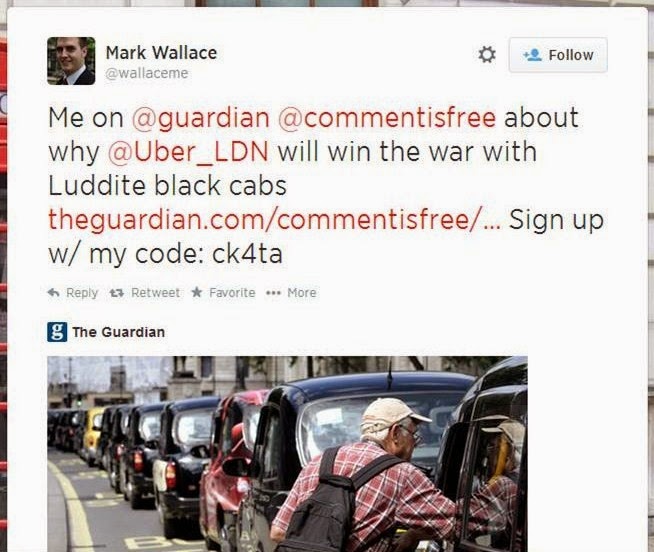 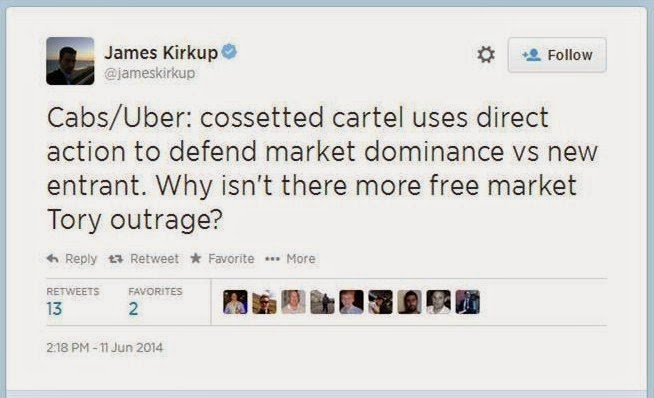 Someone not doing his research ...

Check out that word that Foxton uses to describe Uber: humble. Thus he reinforces the idea that Uber is the archetypal little guy. So how much is Uber worth? What piddling value can be placed on this poor, oppressed underdog, fighting valiantly for freedom of choice on London’s streets? Ah well. Here, the mask slips badly: in June, Uber was valued at a whopping $17 BILLION. 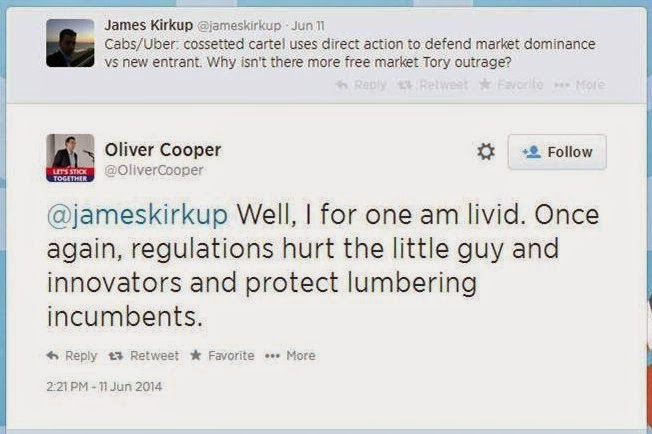 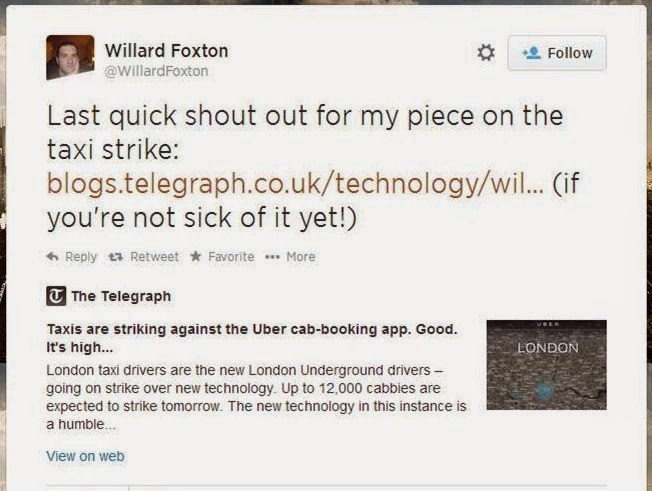 ... and someone blinded by "technology"

You read that right: seventeen billion dollars. And CEO Travis Kalnick is hardly a shrinking violet: “We’re in a political campaign, and the candidate is Uber, and the opponent is an asshole named Taxi ... Nobody likes him, he’s not a nice character, but he’s so woven into the political machinery and fabric that a lot of people owe him favours”. That, libertarian right-wingers, is your hero speaking.

Uber is not a plucky underdog. And, in London, black cabs, generally operated by one-man and one-woman bands, are not Goliath. So they have a Trade association? Just how can that stand up to the lobbying muscle Uber is already buying in across the USA, and will, with the certainty of night following day, buy in the UK? All those blinded by technology are standing for the strong against the weak.

Doing that, while pretending the opposite, is the right’s speciality. No change there.

[UPDATE 1805 hours: as if to underscore the points made above, Politico has reported that "David Plouffe, the former campaign manager and White House adviser to President Barack Obama, is taking his political secret sauce to Uber late next month as senior vice president of policy and strategy, Uber CEO Travis Kalanick told POLITICO in an interview Tuesday ... Kalnick said ... 'Uber is trying to win hearts and minds'".

Yet there are still all those on the libertarian right continuing to pretend that Uber is the disadvantaged start-up, battling valiantly against a privileged incumbent, which in London consists of, er, one-man and one-woman bands of self-employed black cab drivers.

Give it up, folks: Uber is a well-capitalised and highly aggressive large corporate attempting to crush anyone in its way. Those pretending otherwise have been seduced by that app they have downloaded into believing otherwise]
Posted by Tim Fenton at 10:53

There's a certain irony to this given that the average cabby would probably support Uber-style attacks on other industries.