Miliband Wreath Row – He Was Set Up

Once again, the real news, and the news that those on one particular part of the political spectrum would like to be heard, have diverged in a cloud of spin, following a particularly grubby attempt to stitch up opponents. At the Cenotaph in Glasgow, a wreath-laying has commemorated the day when The Great War began 100 years ago. But not all wreaths laid today were equal. 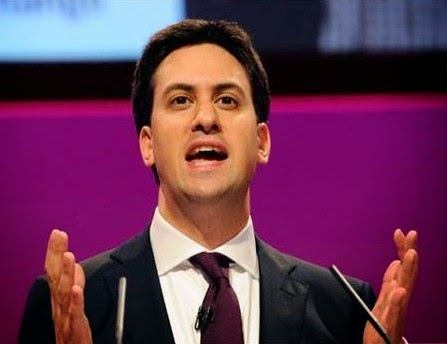 Why is CCHQ so frightened of this man?

By the most fortunate coincidence for all good Tory Party supporters, Young Dave found time to write his own tribute. So, it seems, did the Prince of Wales, but then, he wouldn’t have been included in the Tories’ nasty smear campaign: one doesn’t do that sort of thing to family. Many other figures laying wreaths were merely handed their tribute, but only one was jumped on for it. 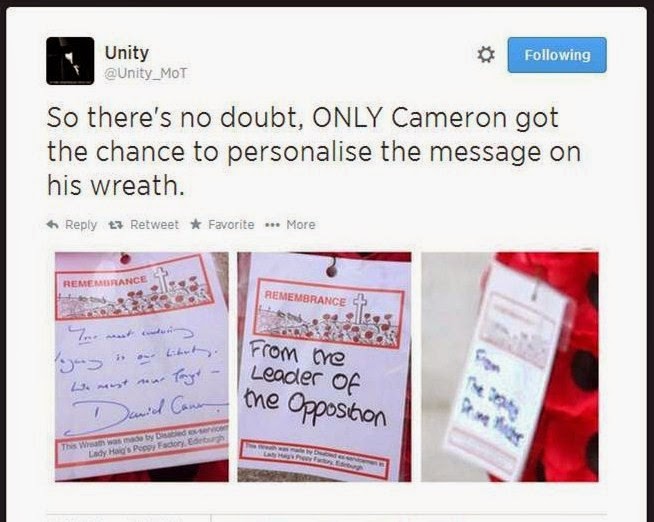 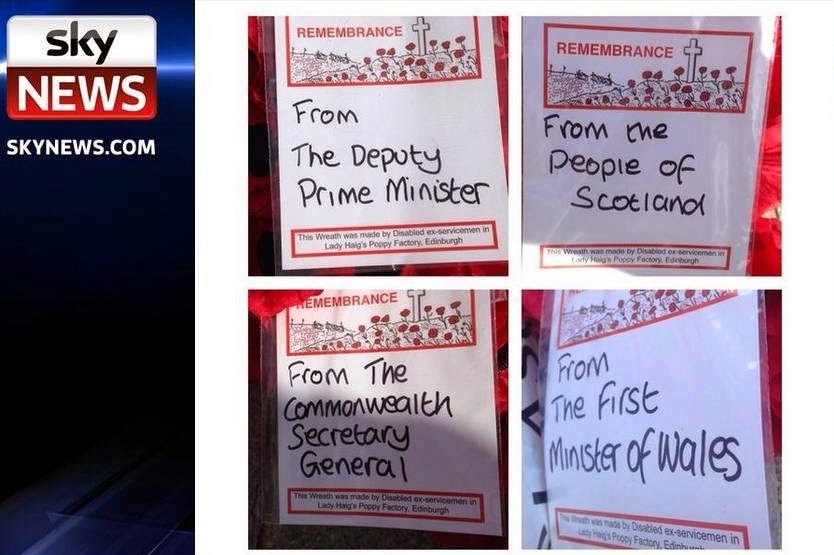 Yes, to no surprise at all, Mil The Younger is being vilified by the right-wing press for his alleged insensitivity, with whoever in the Tory Party dreamed up the dirty trick getting away Scot free. His wreath said “From the leader of the Opposition”, and not in his own hand. Corporal Clegg’s wreath was similarly inscribed. It was the same for the Commonwealth Secretary General, the First Minister of Wales, and others. 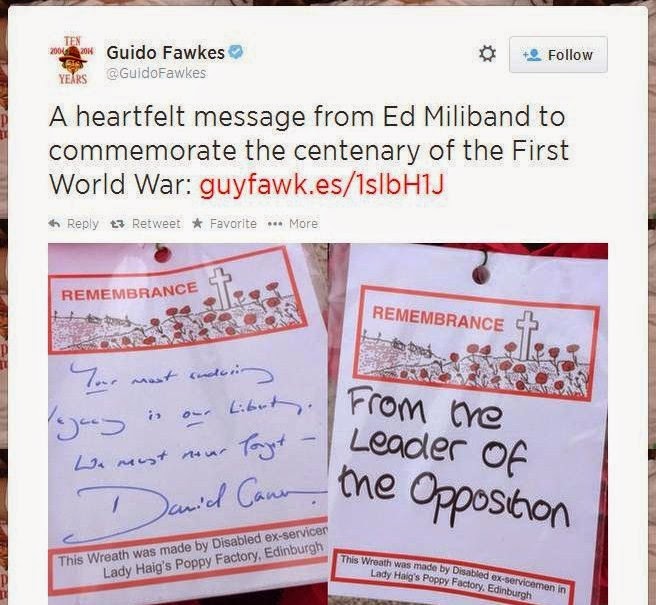 None of this was allowed to enter as the Mail ranted “Ed Miliband is ridiculed for 'pathetic' and 'distasteful' message left on wreath he laid at Cenotaph to mark WWI centenary”. The Telegraph was right behind, with “‘Crass’ Ed Miliband does not sign wreath for First World War commemoration ... Labour leader's wreath carries no name or personal message in ‘disrespectful’ omission”. 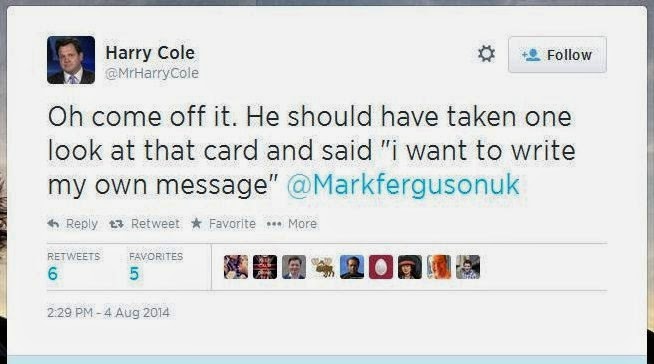 Not, you understand, that the Tories would have been briefing their press pals, having stitched up Miliband, Clegg and the others. Like heck: by another most fortunate coincidence, the perpetually thirsty Paul Staines was on hand to sneer “A touching and heartfelt message from Ed Miliband to commemorate the centenary of the First World War”. His pals were, also by coincidence, on message. 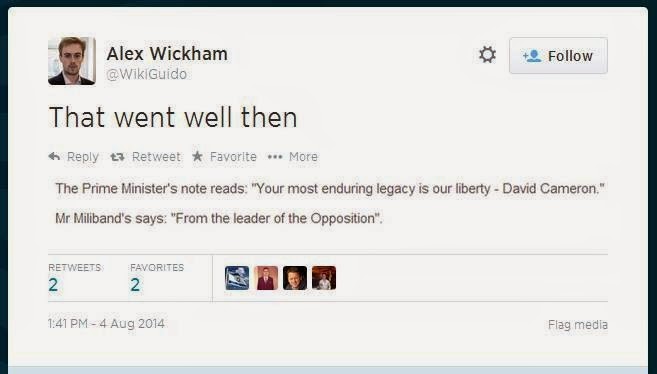 The flannelled fool Henry Cole snarked “Oh come off it. He should have taken one look at that card and said ‘I want to write my own message’”. Yes, he should have stopped the service and got shat on even more. The Fawkes blog’s newly anointed teaboy Alex Wickham chipped in by sneering “That went well then”. And there was a whole torrent of stupidity from Louise Mensch. 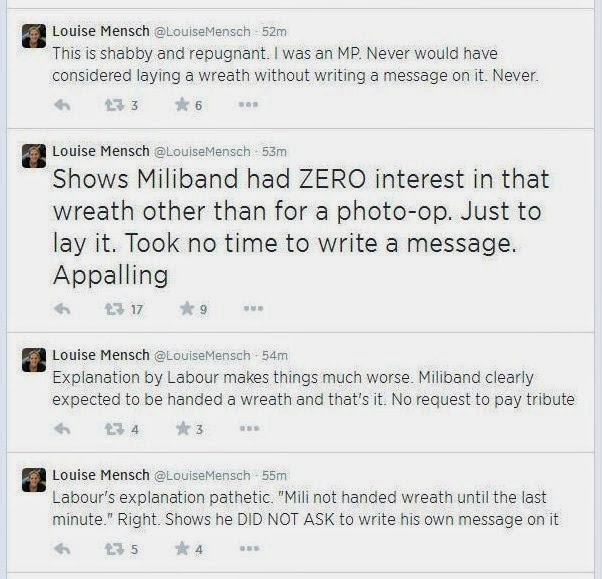 And it was all done with 20/20 hindsight. In fact, as the Guardian discovered, Miliband “came prepared to write a message but the procedure was different to what usually happens at the cenotaph in London and he had to take the wreath without getting the chance to sign his name”. So it seems that Miliband was set up. The Tories really are that desperate to dent Labour’s poll ratings.

But, as ever, they got caught. By the evening news bulletins, the story will be toast.
Posted by Tim Fenton at 17:12

Ol' Harry Cole was a merry ol' soul and a bit more than a merry ol' soul was he,
He called for for some news
and he called for some views
but all he got were his fiddlers three.
There was ubermensch troll and Guido besidea with a Wickham leading from the rear
And all they could give was a load of ol' tripe - another fine mess to cheer!

BBC reporting that the wreaths were supplied by Poppy Scotland who say they were specifically asked to send the blank cards to the Dept of Culture, Media and Sport in London and not attach to wreaths as normal.


DCMS has not yet responded, Downing St has but only to decline a comment.

And here's me thinking today was about the centenary of the start of WW1. Not that I think we should be marking the start of a war anyway, but that's another story.

The Mail headline now asks "were he and Clegg stitched up?" Unusually for a Mail headline question, the answer is "yes"
It seems to have backfired.I wonder if it will have any effect on the Referendum?

But I don't get it; No 10 told us yesterday that Cameron doesn't play politics!

Cannot believe how dumb Milliband is. It's a total lack of effort on his part. He plays politics all the time and loses. Yet another disaster for his highly paid spin doctors.

Even when Cameron is manipulating his PR - which is meant to be what he's good at - he manages to mess it up.

What Louise Mensch gets out of it is anyone's guess. Maybe she's on a promise for a seat in the Lords?

"What Louise Mensch gets out of it is anyone's guess."

HMV pays the bills and there is that Leveson set up, that other Pizzagate, that still has to be avenged somehow?