Gazza And A Sun U-Turn

It’s not been a good week for Rupe’s downmarket troops at the Super Soaraway Currant Bun: first they get ridiculed for perving over a couple having sex in the sea off Magaluf – along with all the puerile sniggering and talk of “romps” – and then they get caught with trousers well and truly round their ankles by the latest twist in the sorry saga of former footballer Paul Gascoigne.

Gazza has been in and out of rehab for years now: some people cannot control their relationship with alcohol, and he is one of them. Every time they dry him out, there is a period of calm, and then an event that sends him back to the bottle. And, as the tabloids are under scrutiny as never before, Gazza falling off the wagon is the kind of cheap story that sends the red-tops into a frenzy. 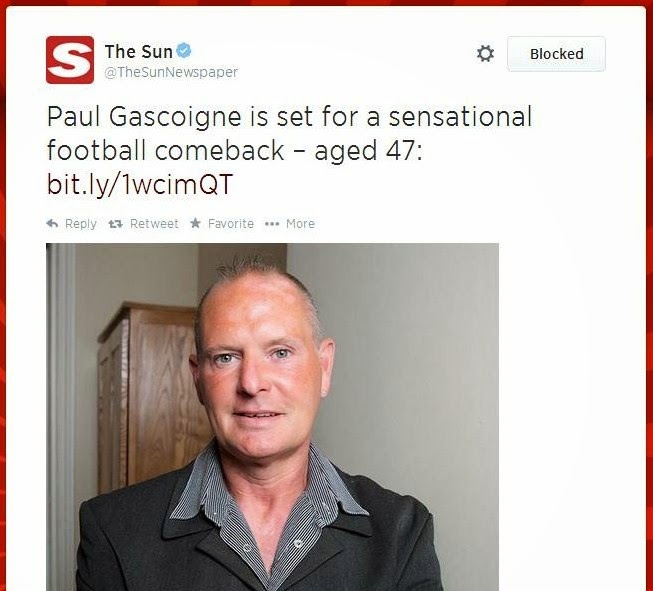 Here's our Gazza story for tomorrow ...

But the Sun had more optimistic news yesterday: at 47, Gascoigne was about to make a shock return to football. “Gazza set for shock football comeback” it proclaimed. You had to pay to see the rest of the story, but the Mirror has helpfully told us for free (see how that works, Rupe?): the comeback would have been for Abbey Windows FC in the Bournemouth Sunday league. 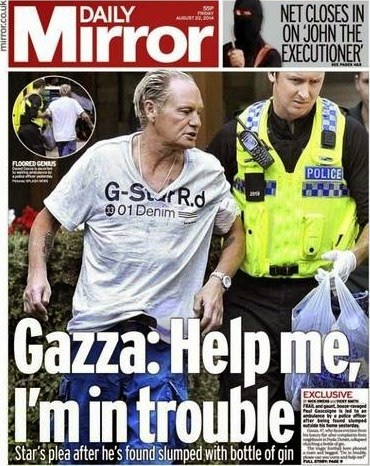 However, and in this case we encounter a significantly sized however, good news is always outsold by bad news, and in Gazza’s case, there was some very bad news coming right round the corner. This was even worse for the Sun, because that bad news was exclusively in the Mirror, and it was that Gascoigne had once again taken solace in the bottle. And a four pack of Stella. 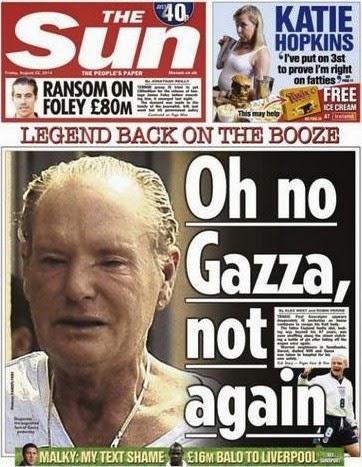 ... OK then, THIS is our Gazza story for tomorrow

“Gazza: Help me, I’m in trouble ... Star’s plea after he’s found slumped with bottle of gin” told the paper. Or perhaps it wasn’t gin: “Ex-England ace Paul Gascoigne was being treated in hospital today as he faces being made homeless following another drinking binge. Paramedics and cops were called after the football legend was seen slumped outside his flat clutching a bottle of vodka”. Whatever.

What was the Sun to do? Simples. The good news story was swiftly relegated to a lower news division as Rupe’s downmarket troops scrabbled to keep up. “Legend back on the booze ... Oh no Gazza, not again” howled today’s front page, hurriedly assembled after the Mirror broke the news just after 1900 hours yesterday. They had little alternative: even the Mail was now on the case.

“Clutching a bottle of gin in the street, the pictures that show ex-England ace Paul Gascoigne is losing his battle with alcohol: Former footballer 'in hospital and facing homelessness after another drinking binge'” told the Dacre doggies. Yes, the good news story is left behind as Gazza gets paraded by the tabloids in an attempt to flog a few more papers. Press exploitation in its least appealing form.

Especially by the Sun, executing a handbrake U-Turn like no other.
Posted by Tim Fenton at 10:02

And they complain when some of the media saw fit to cover the "phonehacking" trials whilst wars were going on in wherever they were going on.

It's such a shame that Cleb Culture Punnish UK has driven much properly reported serious news out of tabloids to make way for the PR stories.

I suppose "tabloid" press will have to make way for the "tablet" press eventually. But then perhaps most of the tabloid press on those already?

Shame the alcohol was so hard on Gazza