Did you ever wonder what happens in a Daily Mail or Mail On Sunday editorial meeting? Apart from the Sunday paper not being graced by the boiling anger that is the legendarily foul mouthed Paul Dacre, the tone is most likely very similar: how to provoke the public not only to buy the paper, but buy into the paper, its values, its opinions ... and its sense of outrage. 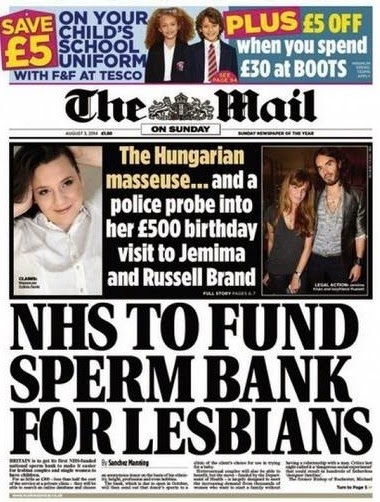 Yes, the Why Oh Why Oh Why Oh Why factor is all important. No finer example of this can be found than that thundering from today’s Mail On Sunday, where Geordie Greig and his henchmen must have thought for, oh, more than ten minutes how to spin the news that a new national sperm bank “will receive £77,000 in public funds and benefit ‘all ethnicities, same-sex couples and single women’”.

This looks, on the face of it, to be utterly inoffensive. But anything “inclusive” raises deep suspicions at Northcliffe House. That the inclusiveness means that non-whites, same-sex couples and single women might benefit brings the anger to the boil. And the thought that those same-sex couples might both be women causes an over-pressurisation that results in a Chernobyl-style detonation.

“NHS TO FUND SPERM BANK FOR LESBIANS” is the resulting outraged headline. That is all that readers are expected to read: that they might give equal weight to “Heterosexual couples will also be able to benefit” and “Heterosexual couples with fertility problems who need donations as part of IVF treatment will be among the customers of the new bank” does not enter. It’s all about TEH LEZZIES! 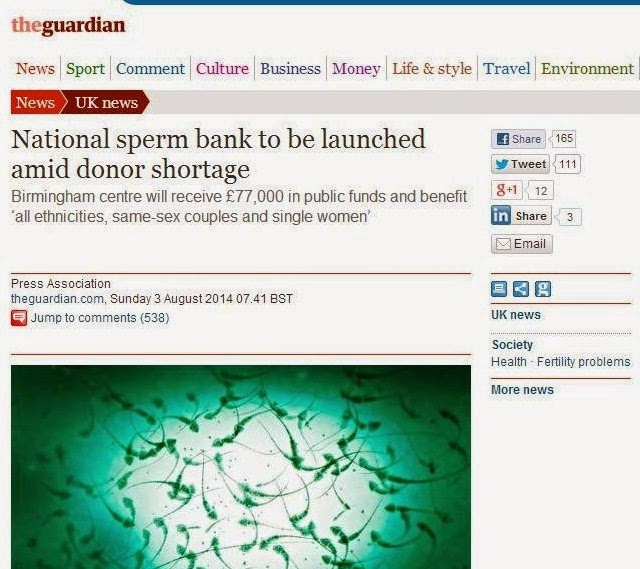 Exactly how selective the MoS has been can be seen by the equivalent report on the Guardian website, headlined “National sperm bank to be launched amid donor shortage ... Birmingham centre will receive £77,000 in public funds and benefit ‘all ethnicities, same-sex couples and single women’”. You wouldn’t bat an eyelid, and the paper has just written it up as a straight report.

That would never do for the MoS, which has found “Critics” of whatever the new venture is. Well, one critic, anyway, Bishop Michael Nazir-Ali, who is opposed to the blessing of same-sex unions and believes it is the duty of married couples to have children. The thought that he might not favour those who are not married having children readily comes to mind.

One also has to ask whether the MoS told Bishop Nazir-Ali the full story before he gave them the quote. Because there really isn’t anything to see here, save for the confected outrage at the thought that a sperm bank might be accessed by some of those who are not the Mail’s kind of people. I mean, some of them could even be migrants. Yes, perhaps next week will bring sperm bank tourism.

Or perhaps not. But what it won’t bring is half decent journalism. No change there.
Posted by Tim Fenton at 17:30

It looks more like the output of a random headline generator to me.
Noun "to" verb noun preposition noun; with nouns chosen to tick Mailite boxes.
It could just as well have read "BBC
to produce gay comedy about WW1"

Don't tempt them. The Mail hates the BBC so much, they might just ...