A report commissioned by Rotherham Metropolitan Borough Council, and published yesterday, confirmed that “At least 1,400 children were subjected to appalling sexual exploitation in Rotherham between 1997 and 2013”. Most – but not all – of the perpetrators were Asian men of Pakistani heritage. Five men from the area have, in the meantime, been convicted of a number of sex offences. 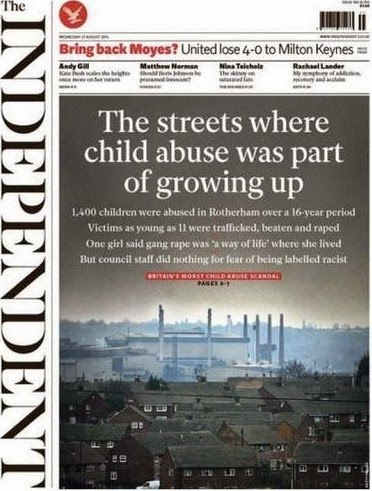 There were failings among senior officials at the Council: “Council and other officials sometimes thought youth workers were exaggerating the exploitation problem. Sometimes they were afraid of being accused of racism if they talked openly about the perpetrators in the town mostly being Pakistani taxi drivers”. And the failure to prioritise the issue by the Police was shockingly bad. 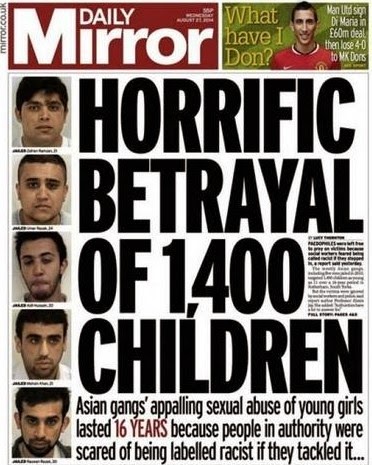 Fortunately, both Council and Police have recently improved their treatment of such behaviours. If only the same could be said for those who scrabble around the dunghill that is Grubstreet, whose sloppy reporting and agenda-driven rabble-rousing is as bad as ever. After the Independent told of “The streets where child abuse was part of growing up”, the rest of the press pack went off the end of the pier. 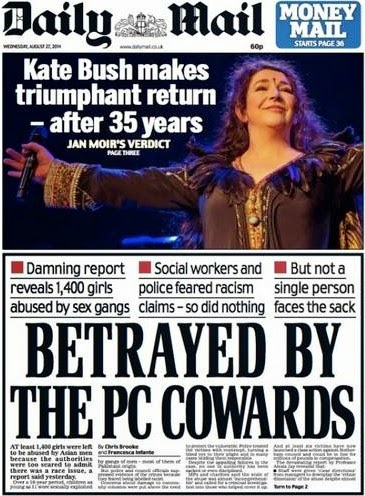 The Mirror kept more or less to the actual story, with “Horrific Betrayal Of 1,400 Children”, but the Mail – to no surprise – had an agenda to push. “Betrayed By The PC Cowards” it thunders. If only the Dacre doggies had read their own copy, which includes “Serious discussions about sexual abuse were impossible because of the ‘macho’ and ‘sexist’ culture at the Labour-controlled council”. 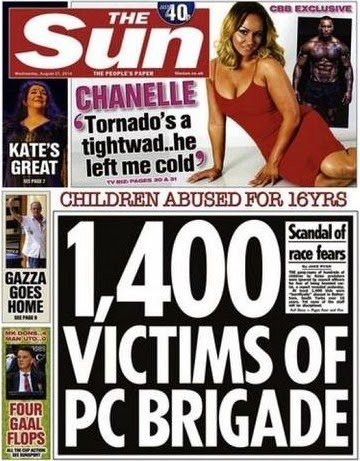 So, Mail people, riddle me this: how the merry f*** can a “macho” and “sexist” culture be the domain of “PC Cowards”? That sounds as if the likes of Richard Littlejohn would have been right at home. And that question applies equally to Rupe’s downmarket troops at the Super Soaraway Currant Bun, howling “1,400 Victims Of PC Brigade”. Moreover, the sloppy reporting doesn’t stop there. 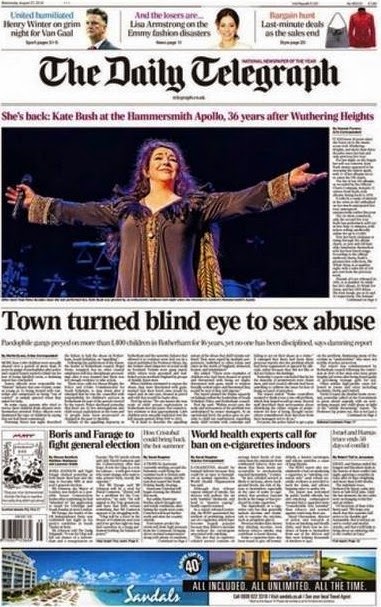 The Maily Telegraph tried a collective shame angle, claiming dishonestly “Town turned blind eye to sex abuse”. It didn’t, and with a population of 258,000, we are not talking Royston Vasey here. The Times has also cut the odd corner by splashing on “Scandal of the 1,400 lost girls”. They weren’t all girls. But the most serious press shortcoming remains out of sight, and predictably so. 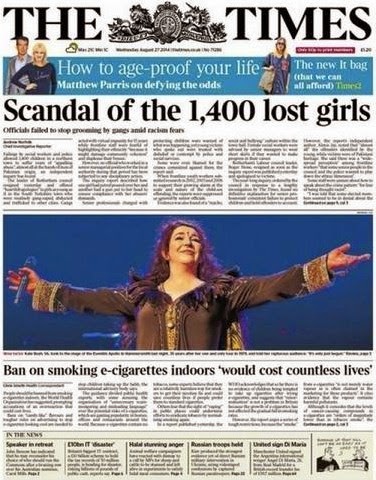 If there was all this child abuse going on, and over a sixteen year period, where were the newspapers? The mainly right-leaning press had a ready-made field day: predominantly Asian men, a Labour stronghold, the apparent downplaying of ethnic backgrounds – all should have been meat and drink to them. But they were, once again, absent elsewhere, only arriving when someone else had done all the work.

Too much punditry, too little real journalism. And that’s not good enough.
Posted by Tim Fenton at 10:22

Back in the seventies, West Yorkshire police were accused of not taking the Ripper seriously because his early victims were just prostitutes, occupational hazard etc. Similar attitudes to the kids involved here were mentioned in the report. How this translates to 'being PC' is beyond me, unless we accept that 'PC' has become shorthand for anything bad.

Also worth remembering that Rotherham was about as old labour as they come. Accusing them of political correctness would be funny if it wasn't such a horrific story