“Unspeakable Things: Sex, Lies And Revolution” by Laurie Penny was published last month. As far as is known – given that the book and ebook are still on sale in the same format as at the beginning of July – there has been no legal intervention over any assertion made therein. That is most interesting, considering what the book reveals about threats made to Ms Penny in the recent past. 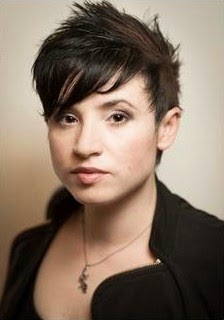 She recalls being approached at a conference by “a bored-looking man in an overstuffed Marks and Spencers suit” who “tells me that a gossip site has pictures of me, and unless I’m nice to him, unless I ‘handle the situation’, he’s going to use them. Pictures of me at college with my boobs out ... do I remember the picture? Yes. Well, I’d better watch out, because there are a lot of people who think I ought to be taken down a peg”. Who is behind this? 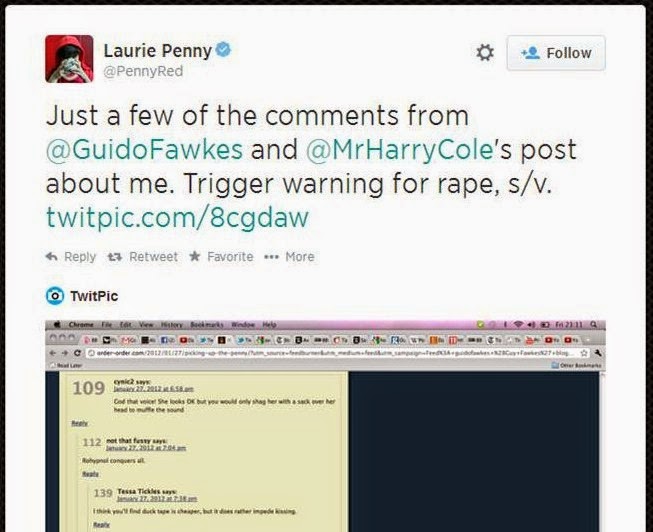 Ah well: “The man who sent this message is the sort of scum that rises to the surface of the cybersphere. He is the blogger the Government fears, the one with dirt on everyone ... the one who hates liberals ... not quite as much as he hates women”. 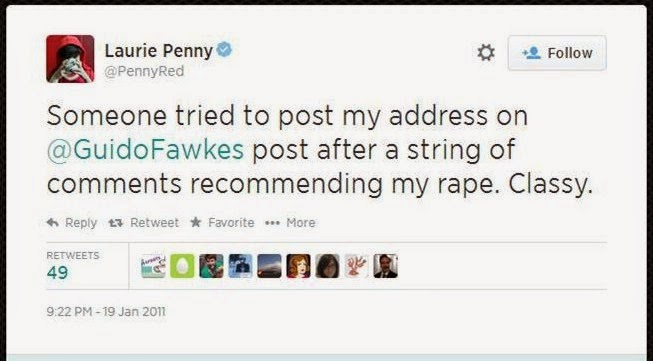 “Half the traffic to his site is driven by revealing or demeaning pictures of female journalists, politicians and public figures, close-ups on breasts and bottoms, fuelling comment threads full of one-handed rape fantasies where any and every woman in a position of influence can be ‘taken down a peg’. He says he’s going to put my breasts on the Internet. He wants me to know he has power over me”. 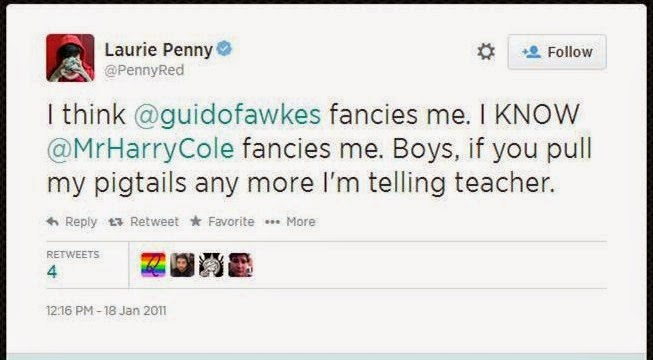 So far, so creepy and stalkery, but who does she mean? Well, there is only one blog that pretends to be the one “the Government fears”. And one of its contributors has effectively confessed to being involved in this sordid episode: step forward the odious flannelled fool Henry Cole, tame gofer to the perpetually thirsty Paul Staines at the Guido Fawkes blog. 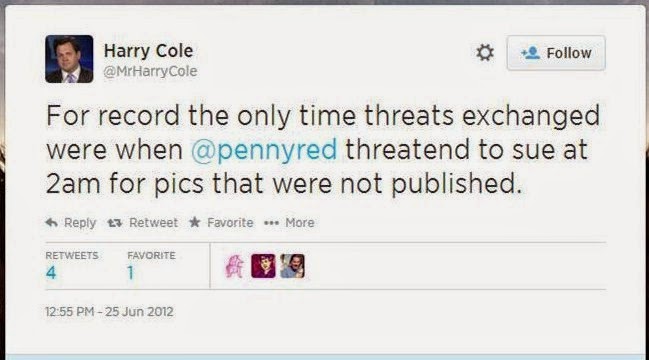 “For record the only time threats exchanged [my emphasis] were when [Laurie Penny] threatened to sue at 2am for pics that were not published” he Tweeted, before trying to brush it all off with “Living in fear of pictures that you published on Facebook [Laurie Penny]? They were sent to us, we said ‘meh’. Months later you call at 2am yelling”. So the Fawkes blog did have the photos. 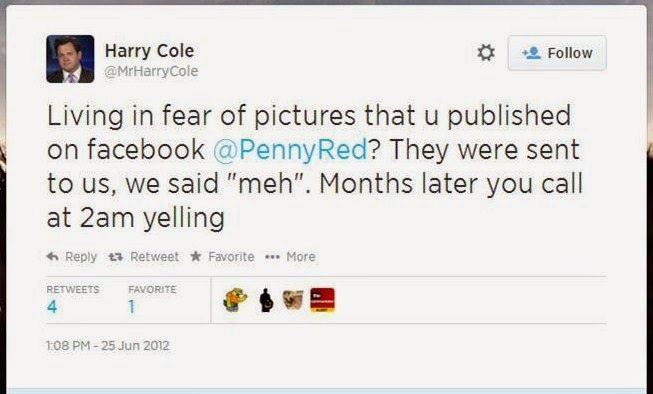 And, as you can see HERE, some particularly nasty comments were left at that blog including one referring to date-rape drug Rohypnol. Note also Ms Penny’s confident assertion that Cole fancied her, which brings to mind the old joke about a dog chasing a car: it wouldn’t know what to do with it if it caught it.

As to the threats Ms Penny describes in her book, it is one person’s word against another, so we cannot say for certain that the Fawkes blog is directly involved. But a cursory examination of what we do know leaves a particularly nasty smell.
Posted by Tim Fenton at 15:06

That whole "we said 'Meh'" thing is a bit school-playground too. Like she didn't live up to their high standards of sexiness. What a tool.

Sad thing is, I can see a lot of the less evolved sort of left-winger being on the side of the Fawkes mob, because Laurie Penny seems to come in for a lot of abuse all across the spectrum. Not because she's a young woman, though. Absolutely not. In fact, it is YOU who is the sexist if you suggest that might be the reason why.