“Tory Shock As MP Joins UKIP” screamed the Daily Express this morning, adding “Defection on day official migrant numbers soar”. The paper known as the Daily UKIP may be a joke across most of the country, but its ageing demographic and aggressive stance in favour of Nigel “Thirsty” Farage and his fellow saloon bar propper-uppers could be highly significant in Clacton. 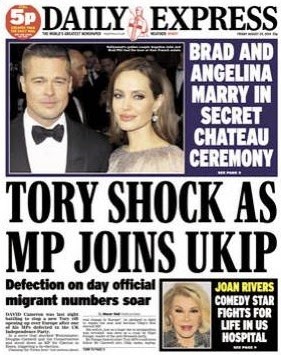 That’s because Clacton, along with other reliably genteel seaside conurbations such as Frinton and Walton, are home to large numbers of retirees, the kind of people who not only pay good money for the Express, but read the paper and possibly even believe it. And Clacton is where the by-election, triggered by Douglas “Kamikaze” Carswell’s resignation from the Tory Party, will happen very soon. 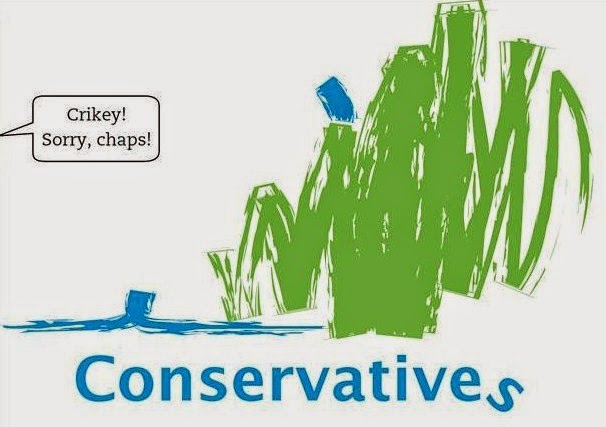 And this presents a problem for Young Dave and his jolly good chaps: while Cameron told BBC Political Editor Nick Robinson yesterday that Carswell’s ship-jumping was “counter-productive”, he will have been livid that his party’s unity has been endangered – once more, over the issue of Europe, that did for Mrs T and hobbled “Shagger” Major. Moreover, the Tories now need another candidate. 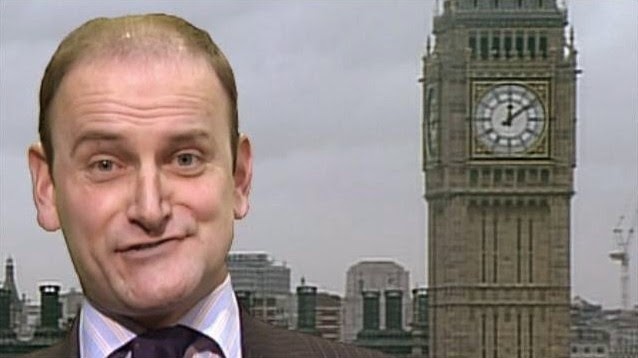 There was nobody “nursing” the Clacton constituency: Carswell was expected to stand for the Tories next May. Then the local party has to be considered: many of them might jump ship along with Mr Kamikaze. Here, party chairman Grant “Spiv” Shapps is able to call on Mark Clarke and the Road Trip 2015 organisation, which has already been gearing up for the campaign.

The Road Trip 2015 Clacton Volunteer Force (which title sounds ominously like something paramilitary from the years of Northern Ireland’s troubles) has a Facebook page with more than 1,300 members. Sounds impressive. But what Shapps and Clarke have to bear in mind is that Clacton’s retirees may not take kindly to all those bright eyed and bushy tailed youngsters. 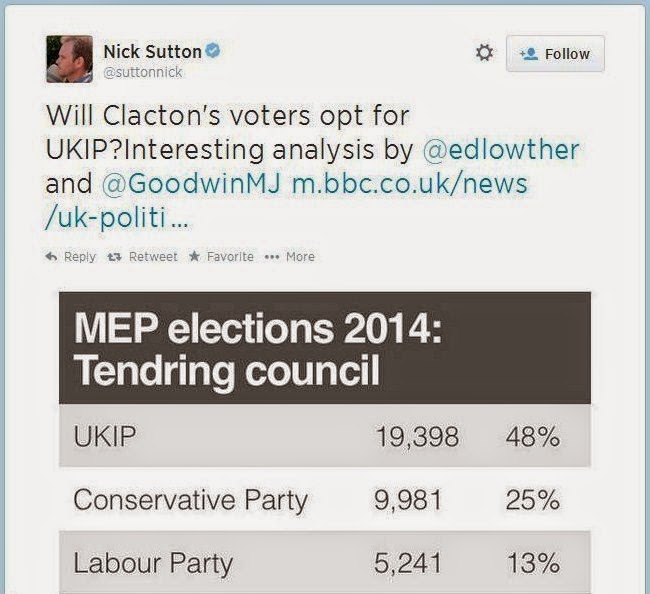 UKIP, on the other hand, has three factors working to its advantage (in addition to the advocacy of the Express): Carswell was a popular MP, the party can call on activists of A Certain Age who will be able to talk, reminisce, and complain about the modern world with all those retirees, before ushering them towards the voting booth – and then there are the European Parliament election results.

As Nick Sutton has noted, returns from the Tendring Council area, which covers the Clacton constituency, showed UKIP polling 48% of the popular vote, with the Tories way back at 25%. Farage and his fringe need to keep hold of as much of that as they can. The Tories may have a mountain to climb in one of the flattest and most featureless parts of the country. And they may not win anything with kids.

Meanwhile, everyone else can get the popcorn in and enjoy the spectacle.
Posted by Tim Fenton at 12:59

"And they may not win anything with kids."

Aye, but with a sound(bite) Minister of Defence and extremely quick off the mark right wingers they might possibly make up for the lack of quality on the left flank and centre field. Have to watch out for those cheap own goals from Dorries though.

Over to you Lawro.

Hansen: what kind of a comment is that? Defence not tight on the attacker, goalie off his line ... that's no just terrible, it's diabolical.

Hmmm, far cry from small boys in the park, jumpers for goalposts, rush goalie, two at the back, three in the middle, four up front.
Only one's gone home for a Ukip and taken his ball with him. Marvellous!

Surely there's a ready made candidate for Clacton. Step forward His Worship the Mayor of London. A well known name and face with charisma (for many but not me), desparate to get back to Parliament and an experienced MP if part time. I appreciate Clacton is a bit naff for Boris and it's so far from London but no Tory candidate and and think of the kudos if he steps in and saves Dave.