Education teaches a variety of disciplines: logic, facts, the ability to calculate and deduce, and saying things that are true appear now and then. But being a pundit, and one required to talk up the not-much-of-a-legacy of Michael “Oiky” Gove, requires the suspension of disbelief, so that the myth can be maintained. And here we encounter the Telegraph’s Matthew d’Ancona. 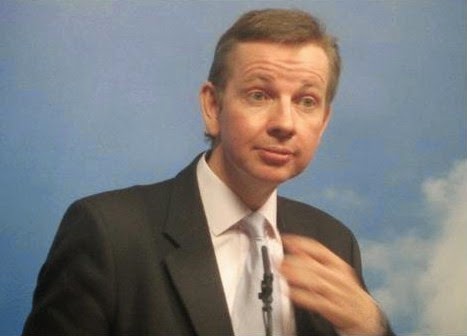 Yes, "Oiky", you still have some fans

“Does the passion of Michael Gove still burn bright? Exam results vindicate the former education secretary's reforms - now his successor must keep that radical flame alive” tells the headline, showing that d’Ancona has gone wrong at the very start: Gove’s reforms, as any fule kno, have not even got into the A-Level syllabus yet. They have had no effect on this year’s results.

Just to get d’Ancona and his fellow Gove admirers up to speed: “Oiky” kicked off his review of the national curriculum back in 2011. There was talk last year of teaching the resulting new curriculum by this year, but that was thought unrealistic by many. There was also the Pisa tests last year, where Gove claimed the results were down to Labour. Nine months later, everything is suddenly Gove’s doing.

No matter, d’Ancona is sticking to his version of recent history: “In 2012, the proportion of A and A* grades awarded at A-level fell for the first time since 1991, as the brakes were jammed at last on the runaway train of grade inflation”. And how, exactly, had his hero achieved this brake application? Strangely, Gove did not mention it in his official statement on those results.

So, Matthew, tell us about the latest results. “Last week, for the third year in a row, there was a fall in the percentage of A grades awarded and, for the first time in 32 years, a slight decline in the pass rate. We are moving from politically motivated Weimar education to a restoration of the gold standard”. Last time we went back on the Gold Standard, the UK economy got screwed. Not a good analogy.

Have another go. “In the age of the ‘global race’, even an arch-defender of the humanities like me has to welcome the news that the number of candidates taking A-level maths has almost doubled in a decade and that computing is the fastest-rising A-level subject in the UK”. Given the two year lead time, that is seven of those ten years starting not under Gove, but under Labour.

So what is “Oiky” doing in his new role? “Those who attend the morning and afternoon meetings at No 10 say that they have become a powerhouse of debate, policy and strategy formation, now that William Hague (as Leader of the House) and Gove have joined Cameron and George Osborne in the huddle”. Bingo! Smash advert re-run meets straight-A f*** right off moment.

Suspension of disbelief? Suspension of reality, more like. What a complete tosser.
Posted by Tim Fenton at 17:27

You covered the "Maths overtakes English" spin, but in the same paragraph we have this:

"... computing is the fastest-rising A-level subject in the UK..."

Wow! That sure sounds like a good thing for the 21st century, information age? Right?

Computing may be a better qualification than ICT (i.e. more suited to the modern workplace or for computer focused degree courses at university), but:

Without wishing to denigrate either Classics or Drama as subjects worthy of study, I do wonder what the government thinks the long term economic effect of the current balance will be?

All figures sourced from: http://www.jcq.org.uk/examination-results/a-levels