A US citizen, James Foley, has been murdered by a representative of what now wants to be known as the Islamic State, and was previously known as ISIS or ISIL. He was killed by decapitation, and this was recorded on video. All this is known. But much about the killer is in the realm of maybe or conjecture. That has not stopped the febrile imagination of the Fourth Estate. 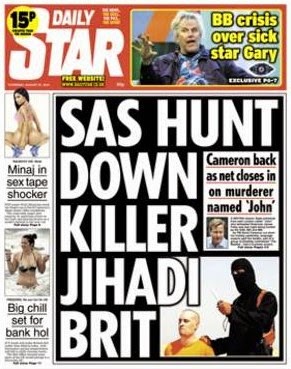 So, while even the Daily Mail says only that “a former hostage said he believed the masked Islamic State maniac was a Londoner he had known as ‘John’”, and someone has “claimed” that “He said international hostages called ‘John’ and his fellow Britons The Beatles because they were from the UK”, this “belief” has been scaled up until it has become a stone-cold certainty. 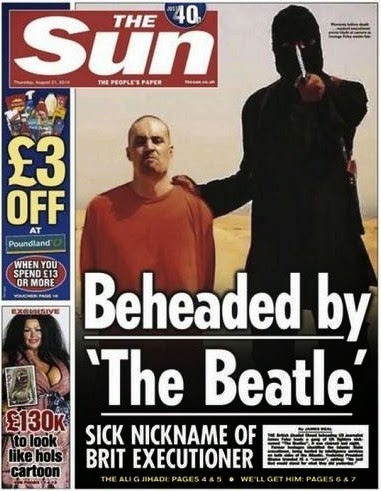 Part of this certainty is that, because the SAS is part of our armed forces, and their deployment is never admitted, they must therefore be either in Iraq right now, or will soon be, at which point the killer of James Foley will be hunted down by them, even though nobody can say with any certainty who he is. Then we are told 500 British ISIS participants have already returned to the UK. 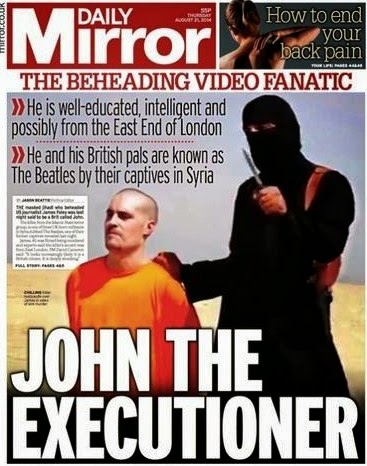 The basis for this? “The Government says there are around 500 British among the fighters while a further 250 are thought to have already returned to the UK”. More possibilities scaled up into dead certainty: Scary Muslims are out there, people. You should be suitably scared. Until, that is, you see how lame the press coverage really is. And, in the case of the red-tops, shameless. 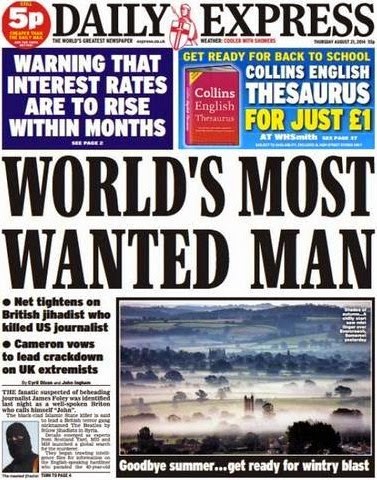 “SAS Hunt Down Killer Jihadi Brit” claims the Daily Star, but then, they also claim that Young Dave is back from his hols, although he’s now returned to Cornwall. The Sun screams “Beheaded by ‘The Beatle’ ...Sick Nickname of Brit Executioner”. Not so sick that the Murdoch hacks can’t do a little invention of their own, calling the killer “The Ali G Jihadi”. But never mind, because “we’ll get him”. What’s the Mirror’s angle? Much the same: “The Beheading Video Fanatic ... John The Executioner” it tells, along with more of that speculation that has been upgraded to fact. The Express assures readers that the killer is “World’s Most Wanted Man” and that the net is closing in. The Mail orders “Find The British Butcher Behind The Mask”, and once more says he is called John. Perhaps. 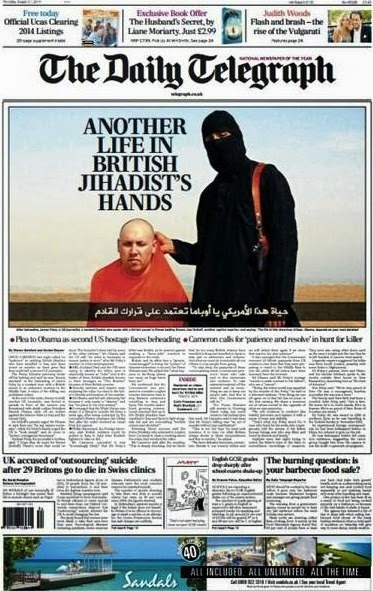 But most surprising of all is the Telegraph, which follows the red-tops by showing not just a head-shot of the killer, but a kneeling Foley too. All these titles are dead sure of the killer’s nationality, that he comes from the east London area, and even his name and nickname, even though nobody has confirmed them. Nature abhors a vacuum; Press nature abhors it enough to fill it with invention.

I was going to say the press could do better than this. But they probably can’t.
Posted by Tim Fenton at 17:28

Presumably Knacker of the Yard will be making calls on a number of newspapers since we have been told that viewing the video might be an offence under our ridiculously widely drawn anti-terrorism laws and the stills used are probably screen grabs from said video.

I could have done without seeing all the front page images on your blog, actually :-(