Cliff, The Beeb, And Mail Hypocrisy

The latest development in the story in which Cliff Richard is still innocent – despite the wall to wall nudge-nudgery – has shown us two of the right-leaning press’ favourite habits at work. One of these is the rush to follow the latest twist, the sheep instinct, and the other is, if in doubt, blame the BBC for anything and everything. And once again, the nastiest of the boot boys is the Mail. 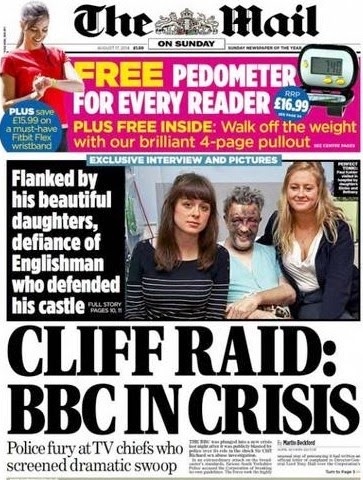 Now that the singer’s apartment has been raided, and there is no further real news, the blame game has begun. At first, the Sundays were going to kick South Yorkshire Police, a most convenient target, given the force is already getting it in the neck as the Hillsborough Inquiry gets into its stride. “Police chief under fire over Sir Cliff” was the front page headline in the Sunday Times.

The Telegraph concurred: “Sir Cliff: now law chief attacks Police over televised raid” it told, also prominently displayed on the front page. But all was swept away as the Mail On Sunday thundered “Cliff Raid: BBC In Crisis ... Police fury at TV chiefs who screened dramatic swoop”. No fury, you understand, attaches to the papers that nudged and winked their way through the story the following day. 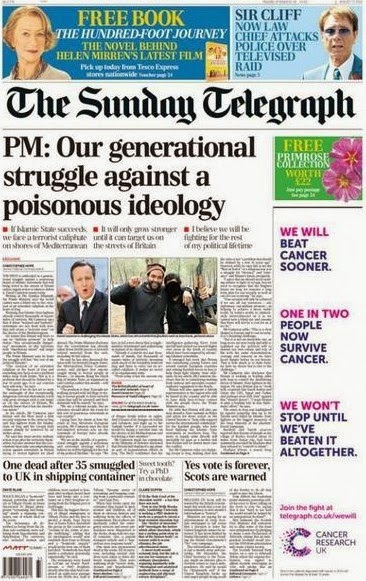 No, the MoS is certain what this means: “The BBC was plunged into a new crisis last night after it was publicly blasted by police over its role in the shock Sir Cliff Richard sex abuse investigation”. Yeah, right. There is even a suitably gullible Tory MP, Andrew Bridgen, to accuse the Corporation of “blackmail” on the basis of not knowing what the heck he was talking about.

What the MoS does not seem to have taken on board is this: the suggestion from “Police sources” is that a BBC journalist contacted them some weeks ago, claiming to know about their investigation into the allegation against Cliff Richard. Therefore, it is claimed, the Police were not the source for the Beeb knowing about the story, which culminated in last week’s raid. 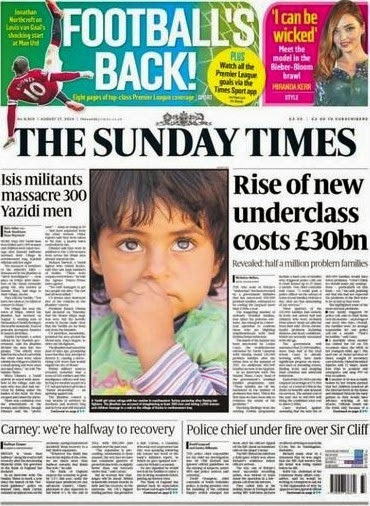 However, and here we encounter a significantly sized however, nobody seems to be asking the obvious question: how did that BBC journalist find out that there was a Police investigation? Someone must have told them, and that someone is most likely to have been a Police officer. So the complaint made by the South Yorkshire force to the Beeb has one main purpose: find the mole.

Everything else is conjecture, to which observers of the press will shrug their shoulders and observe “no change there, then”. The sheep instinct, in the meantime, has taken hold, exemplified by the Telegraph changing direction and obediently following along behind the MoS. In the meantime, there has still been no request for Cliff Richard to return to the UK and talk to the Police.

Yes, he is still innocent, not that the right-wing press care. No change there, indeed.
Posted by Tim Fenton at 11:03

It could also be that someone the police spoke with in the process of the enquiry told someone who told the BBC.

Had enough folk complained about the disgraceful treatment meted out to the dead man, we wouldn't be putting up with this nonsense now. Justice For Jimmy Savile, that's the name of my blog and there's more of us than you might think.
Stop this madness now and put those who engineered it on trial !
Great piece by the way, cheers !