There have been protests over the weekend in favour of boycotting Israeli goods, and one of these was on Holborn, in central London, on Saturday afternoon. As a precaution, the store manager of a Sainsbury’s store that was being picketed by the demonstrators ordered that kosher goods be temporarily withdrawn from display. It was put in chilled storage and restored to display later in the day. 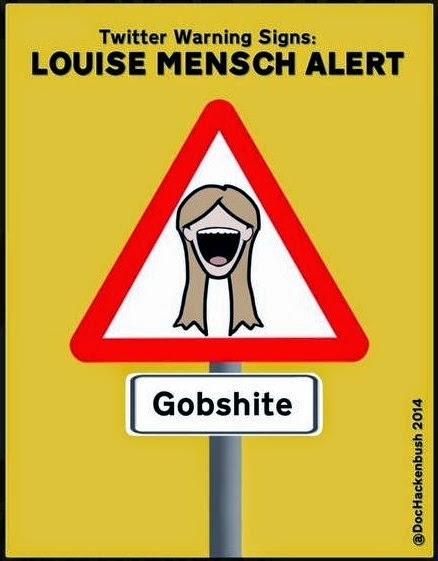 Now, kosher simply means that the food has been deemed fit for consumption in accordance with traditions that can be traced back to the books of Leviticus and Deuteronomy. It will carry a symbol on its container to show this. So it does not have to have originated in Israel; the country of origin is immaterial. But, by the same token, protestors may not be sophisticated enough to understand this. 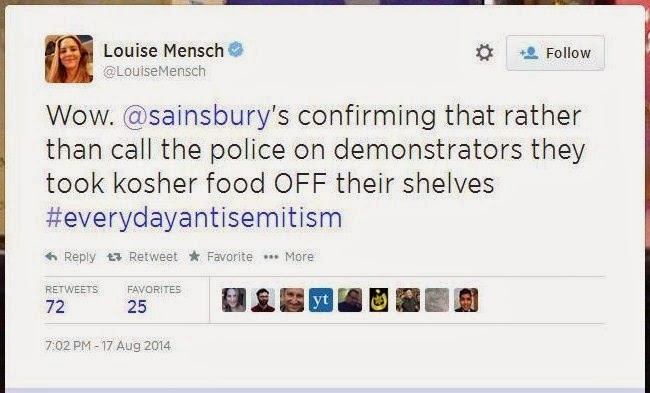 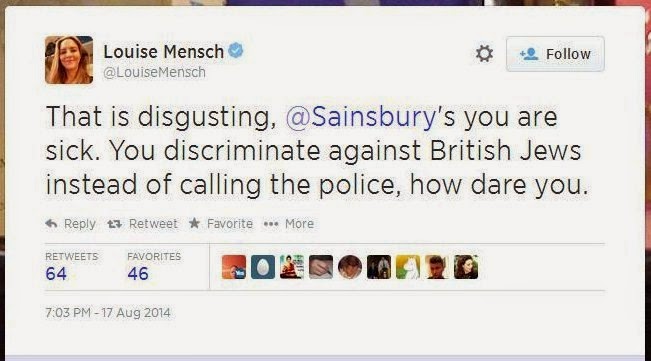 What happened was an expedient decision by a store manager, nothing more. So who would like to show an appropriate sense of proportion? As if you need to ask: from the safety of a suitably secure Manhattan apartment, Louise Mensch went in with both feet. “Rather than call the Police on demonstrators they took Kosher food OFF their shelves ... that is disgusting ... you are sick ... how dare you”. 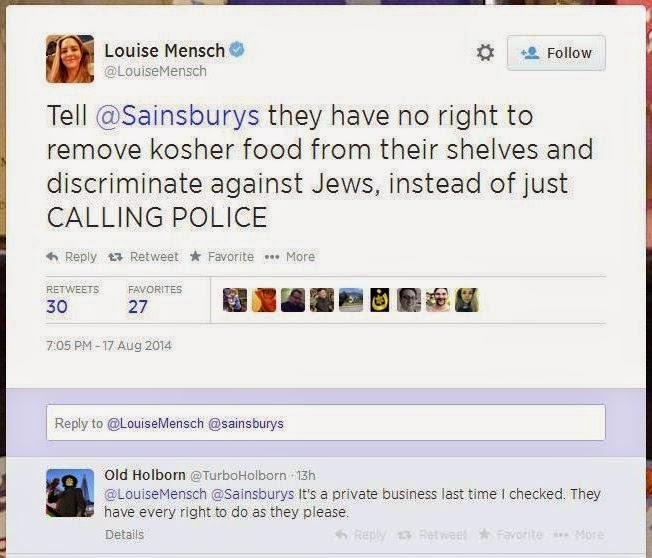 And that was just the warm-up: “Sainsbury’s are the scum of the earth ... for taking away kosher food rather than contacting Police. Evil racism ... they have no right to remove kosher food ... and discriminate against Jews, instead of just CALLING POLICE”. Yes, she’s a SUN COLUMNIST and so puts IMPORTANT words in CAPITALS. And who’s to say the cops weren’t there anyway, or on their way? 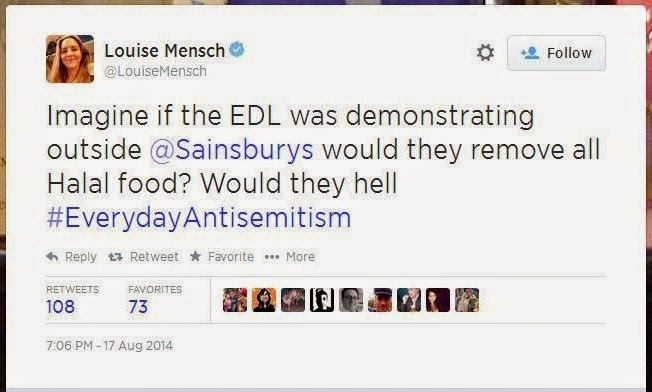 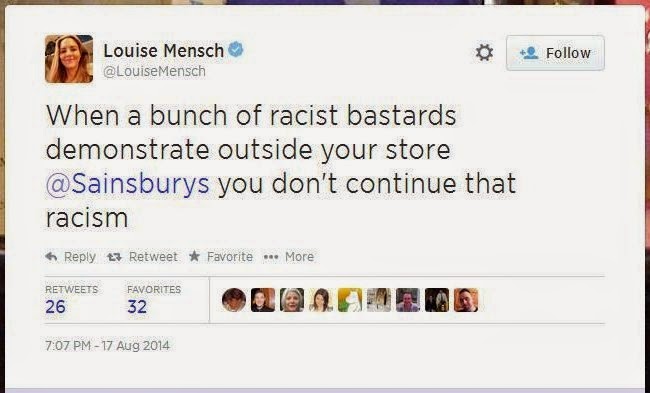 Whatever. “Imagine if the EDL was demonstrating outside Sainsbury’s, would they remove all Halal food? Would they hell ... when a bunch of racist bastards demonstrate outside your store Sainsbury’s, don’t you continue that racism”. Darned easy stuff, shooting your mouth off from 3,000 miles away, isn’t it? 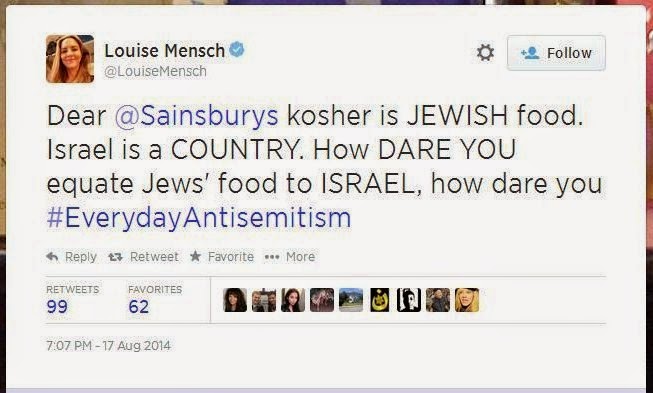 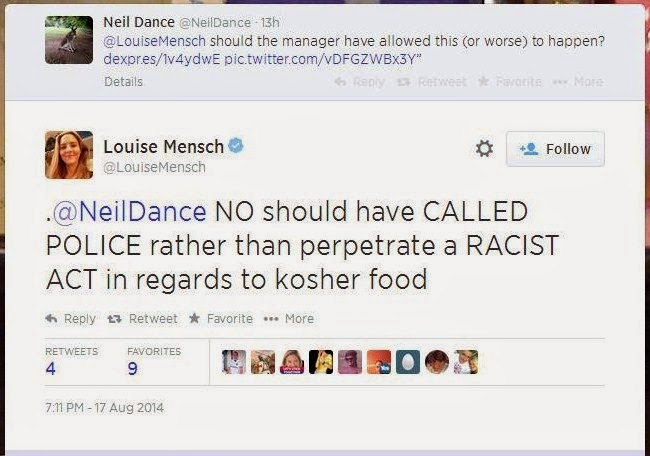 Eventually, she got to the point: “Dear Sainsbury’s, kosher is JEWISH food. Israel is a COUNTRY. How dare you equate Jews’ food to ISRAEL, how dare you ... should have CALLED POLICE rather than perpetrate a RACIST ACT in regards to kosher food”. As I said, we all know that kosher does not equal Israel, but as pointed out earlier, your average protestor might not be quite up to speed on that. 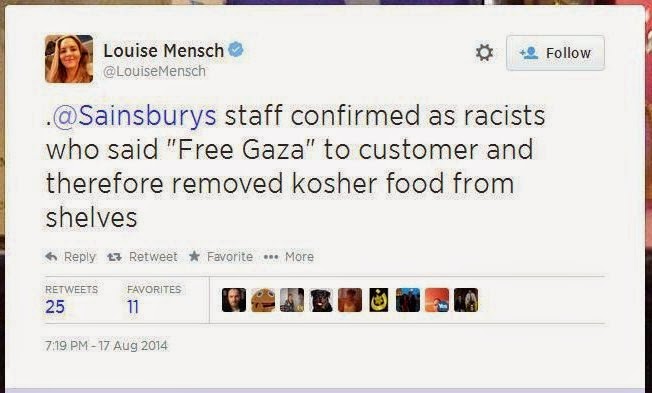 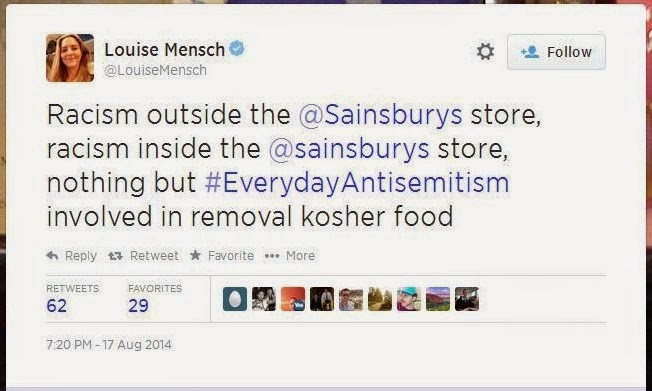 Armchair critics have become keyboard heroes, but only within their own echo chambers. The rest of us inhabit the real world, where life isn’t so simple.
Posted by Tim Fenton at 11:01

Doesn't she have a tiresome "chick-lit" tome to be writing instead?

I didn't think this woman could get any more offensive and embarrassing, but here we are.
For one thing, if that Sainsbury's had decided to leave the food on the shelves, there'd have been a repeat of the Tesco incident - rabid so-called "protestors" would have trashed the place, there'd have been thousands of pounds worth of food lost, and the end result would be: no food available for the kosher customers for the next few days. And how much d'you want to bet she'd have seen a picture of *those* empty shelves and pitched a fit about that, too?
Her analogy is wrong, too. If the EDL were protesting outside a sainsbury's store that sold halal stuff...then yes, they *would* remove the halal food and hide it in the back. They'd do it for any items from any ethnicity/religion, because at the end of the day, they want to protect their profits, and therefore their stock.

For another thing - I've worked in sainsbo's before (in a smaller one, but if was still quite multicultural). They've many faults as a company, but allowing gratuitious offense to random customers isn't one of them. While the staff member who allegedly said 'Free Gaza' had every right to support lifting the occupations, and every right to express their political opinions, it does come across as a bit of a dick move in regards to a jewish customer questioning them about *kosher* products. Which is why I'm a little hesitant to believe that this part of the story isn't a teensy bit exaggerated. There's no way a random staff member would have had any authority over removing stock from the shelves, that would be the manager's decision, and I highly doubt that anyone would be so much of a prick as to (from what I gather from the account) answer the question "where's the kosher food?" with "free gaza! *walk away*". For one thing, there was a huge culture of customer service/never offend a customer/any customer could be a mystery customer in that company, we were always told never to let our real feelings show with them. It might be that bits of the account have gotten a little confused - people did omit the bit about the protestors threatening to smash up the stock in accounts before, so I'm inclined to think that something's missing here.

(If it *did* happen that way though, then that worker should be given a warning, because being rude to random British jewish customers because of your views on a totally different country is wrong. Still doesn't make Sainsbury's as a whole racist, though, Louise. It was one of the least bigoted places I worked for.)

Just on a point of linguistics - "Jewish" isn't a race, so how can any of this be racist?