The Murdoch Sun is hidden away behind a paywall, but several people have screen shotted enough of today’s paper (see how that works, Rupe?) for us to be able to assess the “Danifesto” proposed by Dan Ware, the 37 year old self-employed car dealer and cage fighter. And the conclusion is, whisper it quietly, that any politician advocating Ware’s measures would be torn apart by the press.

Dan starts with benefits: “Work for four years after you leave school before you can claim benefits”. While this sounds laudable, the thought enters that this requires jobs to be available, or, if you’re prepared to go self-employed, there to be work for you to do. And what happens to those who want to better themselves by attending University or by doing other full-time training?

But then we come to the main event, Immigration: “Copy the Aussies. If people show up uninvited, send them back”. And, as Jon Stewart might have said, two things here. Showing up uninvited was exactly what Ware did at Emily Thornberry’s house yesterday. And “sending them back” could come straight from a 1960s National Front manifesto – or a more modern BNP one. 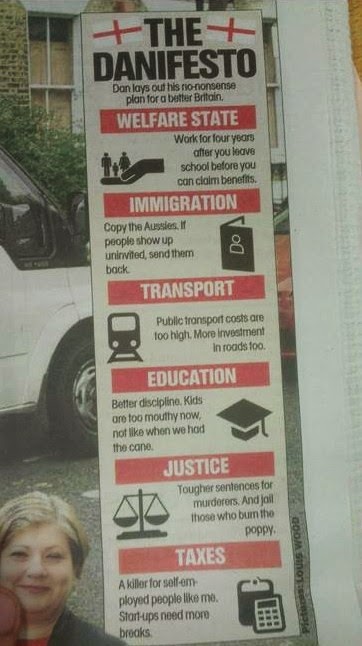 Still, onwards and, er, onwards, eh? Next up is Transport. “Public transport costs are too high. More investment in roads too”. Fine. Then someone has to pay for it – and that means paying more in tax. Same goes for Justice, where Dan tells “Tougher sentences for murderers. And jail those who burn the poppy”. So he wants to send more people to jail, and for longer. Do go on.

Education does not escape his gaze: “Better discipline. Kids are too mouthy now, not like when we had the cane”. So he’s not fussed about teaching standards, he just wants children to do as they’re sodding well told, on pain of having the crap beaten out of them. And all that discipline will mean more money being spent on schools – assuming there is to be some teaching as well.

So then we come to Taxes: “A killer for self-employed people like me. Start-ups need more breaks”. Hello Dan from another self-employed person – where do you think the cheaper public transport, roads investment, more prison places, and more money for all that school discipline, will come from? A magic money tree?

One more thought enters: that the unsuspecting Dan Ware has been had for a mug by Rupe’s downmarket troops at the Sun. If the Murdoch poodles are happy to back someone who said “I will continue to fly the flags – I don’t care who it pisses off. I know there is a lot of ethnic minorities that don’t like it”, and “send them back”, then they should stop hiding behind him and say so openly.

Dan Ware has been used as a performing freak show by the Sun. When he finds out, as the saying goes, he’ll be mad as hell. But it will be too late by then.
Posted by Tim Fenton at 12:59

As @TheMirrorStyle helpfully pointed out, Dan the White Van Man is 37 - he will never have known the efficiency of the cane's "prowess" at maintaining discipline...

Re: benefits - an incredibly important point that needs to be made is that some people are not well enough to work, and that includes school leavers and other young adults.

15 minutes of fame. I'm sure the fee he was paid will help him justify his views.

Reminds me of Joe the plumber. Wonder how much Rupert is paying him.

White van man with house covered in England flags in "turns out to be a bit of a cock" revelation.

Maybe Emily Thornberry had a point after all.

So you're having a sneer at white van man too. Emily was justified .... because the left and liberals hate people like this guy.

LBC leftie presenter James O'Brien took the view that you wouldn't want to live next door to someone who had England flags on their windows like that. But went ballistic with Farage for suggesting that he wouldn't want to live next door to Romainans.
What if they were a house full of Romanian workers who overcrowded the house and had a bed sheet across the downstairs windows instead of curtains?
If Farage had said that, O'Brien might have agreed with him perhaps.

Leftie LBC presenter James O'Brien actually said that you wouldn't want to live next door to somebody flying dirty flags which had been left out, unwashed, for 6 months or so. He said he found that to be disrespectful to the flag.

If you want to see bedsheets over the windows from Brits, come with me to some other parts of Strood. You do live in the constituency don't you?

John (Man from Mars) Redwood is asking: 'Why does Labour despise or marginalise England?

Ashie, yes you're right about what O'Brien said. He said that there was nothing wrong with flying a flag, just not in that kind of ''low class'' way. And he objected to Garage for making the point about Romanians. The kinds of Romanians you get up at Marble Arch was what Garage had in mind I think, but in the hatchet job of the LBC interview that O'Brien gave him, he made sure that Garage never had time to settle and clarify exactly what he meant.
O'Brien lives in posh Chiswick.
He chose not to move into ''bedsitland'' where so many migrant workers live and where whole roads can be very scrufy indeed because of the transient nature of the population.
He's a hypocrite. He and his neighbours wouldn't like the Romanians from Marble Arch to be housed in his street either.

And Miliband sacking the woman who was sticking up for him just last week is pathetic.

Can someone change the G for F on those typos I made?