The Super Soaraway Currant Bun was not backward in coming forward to blow its own trumpet yesterday, as its editorial told “Ed Miliband says he’ll briefly freeze energy bills if he wins power. So what? The Sun has already cut them for 20,000 readers”. Yes, a freeze lasting years is “brief”, while what the Sun is talking about is a deal for just 12 months.

So, just to distract the easily distracted, out comes the smearing brush: “When the Labour leader said high prices could simply be banned, we said the more sensible and realistic answer was switching suppliers”. Hello Trevor Kavanagh! Hello Tom Newton Dunn! Hello Steve Hawkes! Exactly when did he say that? What’s that? He didn’t actually say that? Well, knock me down with a feather!

But here’s the real sleight of hand: “Now we have harnessed the buying power of thousands of Sun fans to negotiate a stonking tariff from Extra Energy, cheaper than any on a price comparison site ... Indeed, we got involved when we found those sites hiding the best deals if they didn’t pay commission ... We don’t make any money on ours. Our readers get the savings instead”. 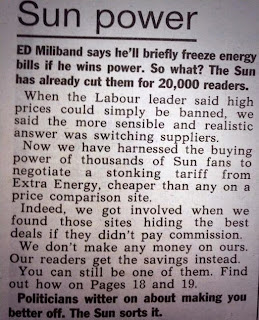 Yes folks, Rupe’s downmarket troops have got their readers not just a good deal, or even a very good deal, but a STONKING one. I mean, Phwoarr! But, as Captain Blackadder might have observed, there was only one thing wrong with this idea – it was bollocks. For starters, one does not have to go anywhere near the Sun to discover that Extra Energy are offering a good deal.

Nor does one have to band together with Sun readers, or indeed anyone else, to secure that deal. We know this because there are other ways of getting information on comparing energy price deals than price comparison sites, and they are just as widely read as the Sun. You think I jest? I give you This Is Money (available on Mail Online) and ITV This Morning.

This Is Money said back in August that “The cheapest one-year fix currently up for grabs is Extra Energy’s ValuePlus Fixed Price September 2015 v1 deal, costing an average of £990 a year”. It cited – guess what – price comparison site MoneySupermarket.com! The following month, ITV This Morning pitched the same figures to its viewers and readers.

There is nothing exclusive about the Sun’s deal – anyone can get it. And, despite the suggestion that it can’t be found on price comparison sites – it can. So the Sun doesn’t make any money on it? Fine – ignore the Murdoch doggies and go direct, so they still don’t make any money, and you don’t have to lower yourself to reading the Super Soaraway Currant Bun.

The Murdoch Sun: celebrating 45 years’ lying to the masses on Monday next week.
Posted by Tim Fenton at 10:48

Love the blog, and your forensic dissections are excellent. You don't though, with great respect, need to continue with the 'as Captain Blackadder said', 'see how that works Rupe?' etc tropes. Rather than create a familiar and welcome style, it just, to me, creates a 'oh god, when is he going to drop that one?' dread. I hope it doesn't appear condescending to say that your writing doesn't need them.

The Sun's statement that Ed Milliband will "briefly freeze energy bills" is misleading, but then it is The Sun, so it's to be expected.

I believe the plan is an immediate freeze on bills, followed by a reorganisation of the market that is intended to bring lower bills long term.

But that wouldn't fit the Sun's narrative, I suppose.