Libertarians like to suggest that increasing taxes – making people pay 21 pence Income Tax in the pound rather than 20 – infringes upon personal freedom. One wonders how those former residents of East Berlin view that: for 28 long years, they could only gaze across the wall at the bright lights of the West as East Germany turned in on itself and slowly decayed. That really was about personal freedom. 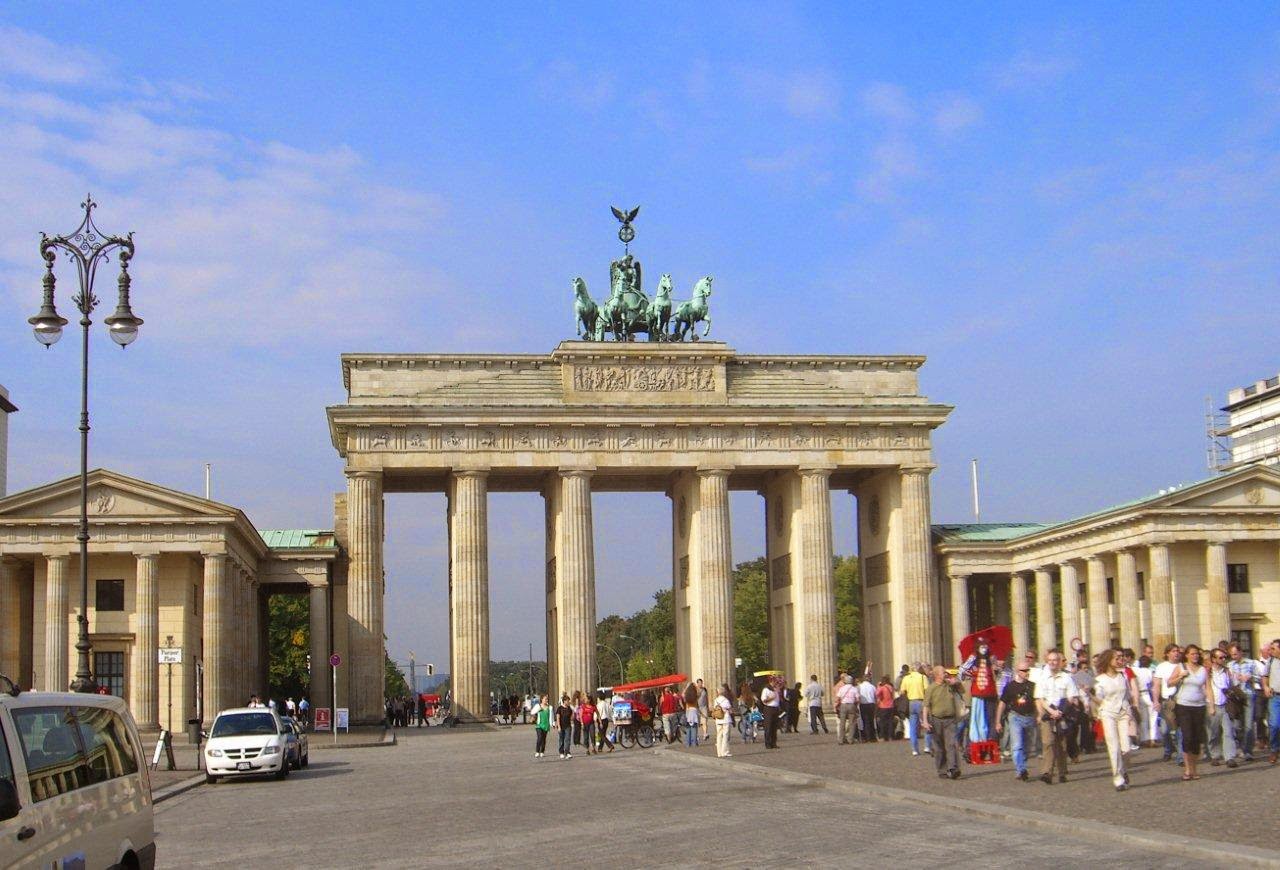 Brandenburg Gate, east side: the view through the pillars would have been mostly blocked by the Wall, which was immediately to its western side

After the Second World War ended, Berlin was divided into four zones of occupation, under the control of Russia, the USA, Great Britain, and France. Although three of those four zones, or sectors, were under the control of the West, the city was marooned in East Germany. The flight of inhabitants to those western sectors began to alarm the authorities in the East. The Wall was their answer. 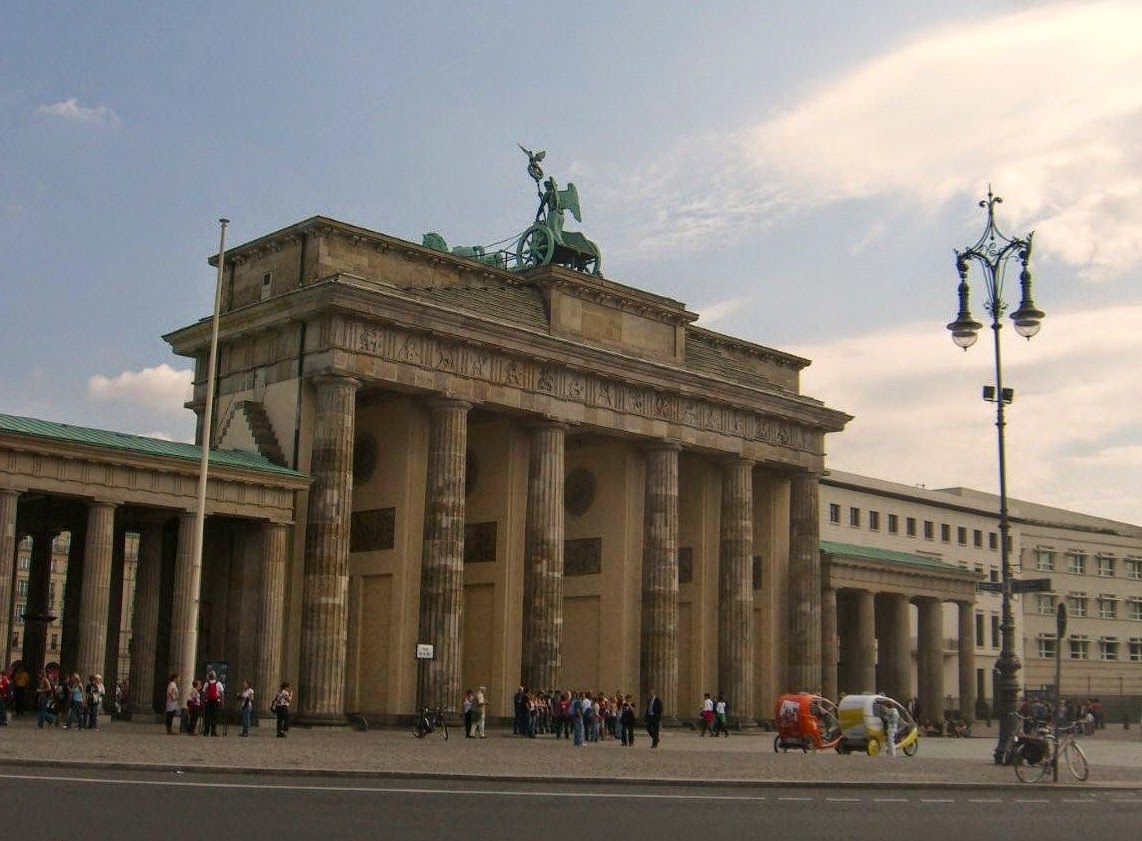 Brandenburg Gate, west side: this view would have been blocked by the Wall

The fraudulently-titled “Anti-Fascist Protection Barrier”, with its double wall and killing strip between, became the most immediate symbol of the Cold War. Film makers generated a slew of features with the divided city as its backdrop, including The Spy Who Came In From The Cold, Funeral In Berlin, and The Quiller Memorandum. The BBC set the final scene of Smiley’s People there, but filmed it in Nottingham. 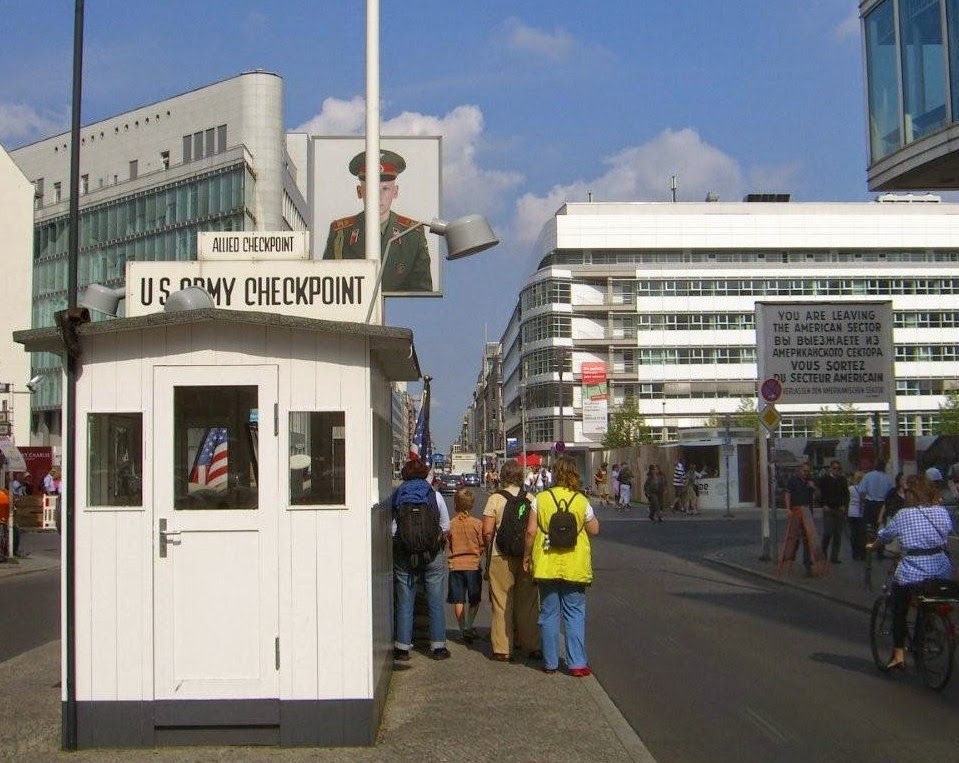 Remains of Check Point Charlie on Friedrichstrasse, looking north: bizarrely, US and Soviet tanks once squared up to one another here

Getting to Berlin was difficult and sometimes unreliable: there were motorway corridors, along which drivers and other occupants of cars were, in theory at least, not permitted to look at the East German countryside. Trains from the West were locked and manned by East German guards while crossing the country. Domestic airlines were not permitted to fly to any Berlin airport. 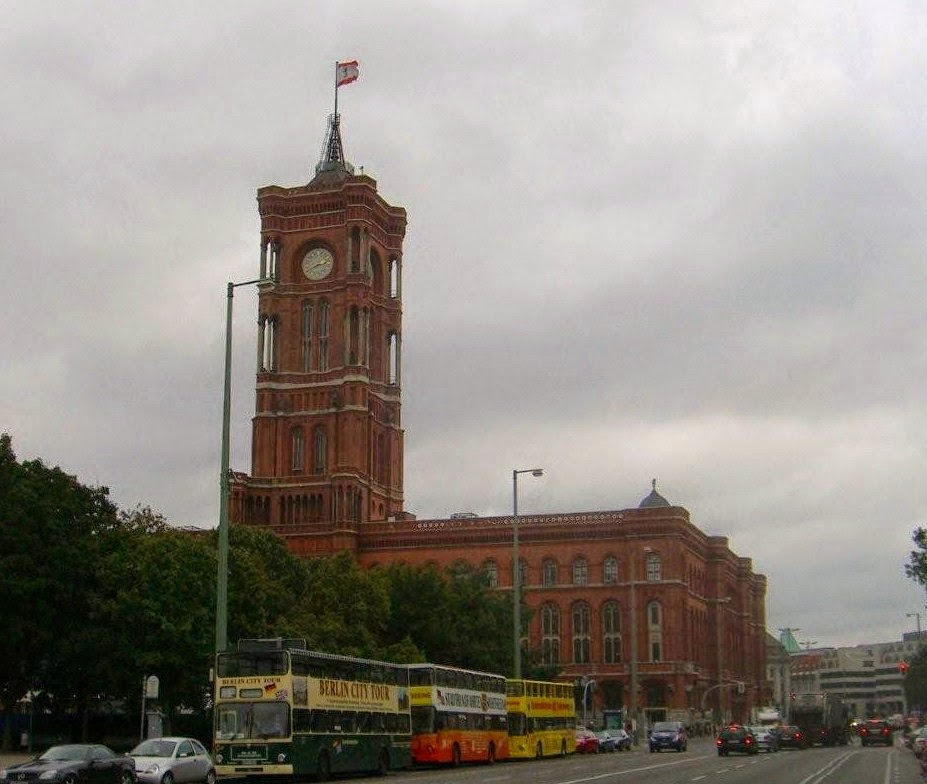 Berlin town hall, the Rotes Rathaus, served only the East during the partition of the city

This hit only the West: East Berlin’s airport, Schoenefeld, was outside the city boundary. West Berlin was cut off from the city’s town hall; as a result, the town hall of Schoeneberg became the West Berlin town hall, and it was here that John F Kennedy came in 1963 to make his unfairly derided “Ich Bin Ein Berliner” speech. 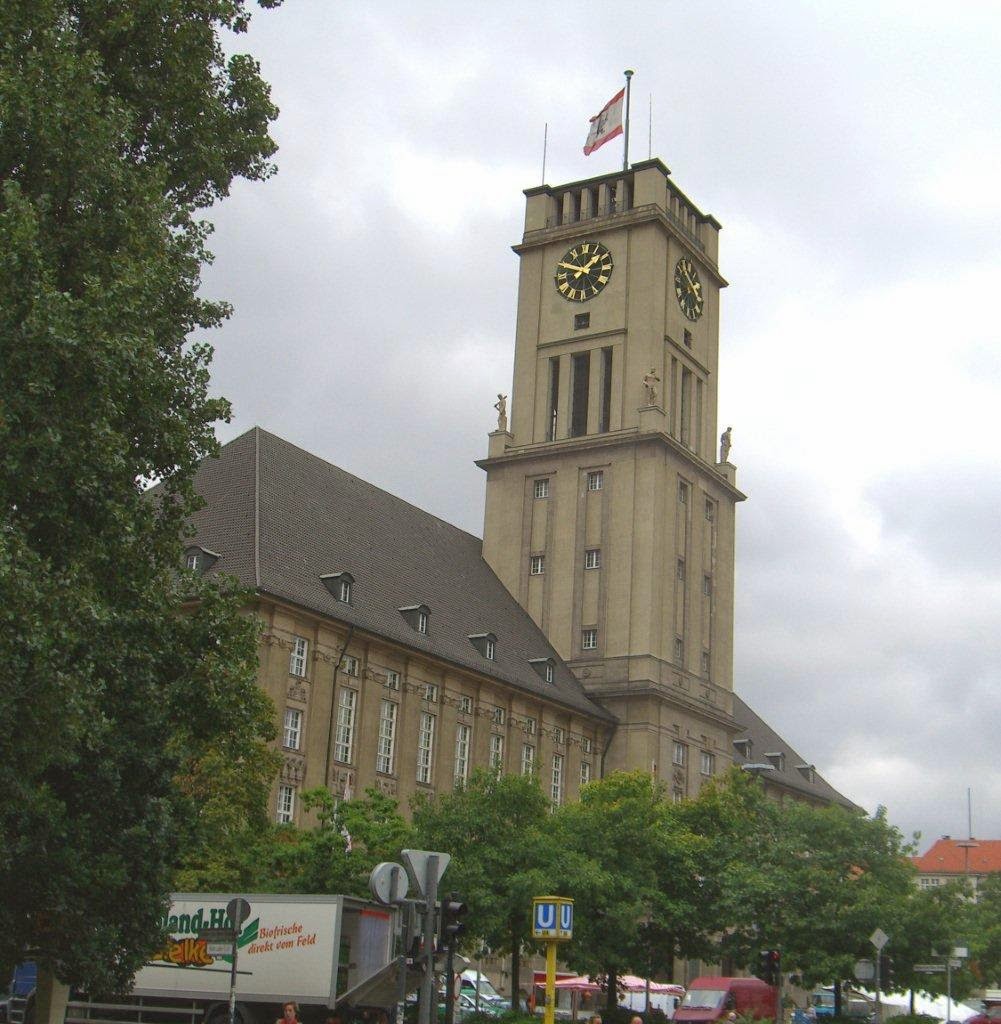 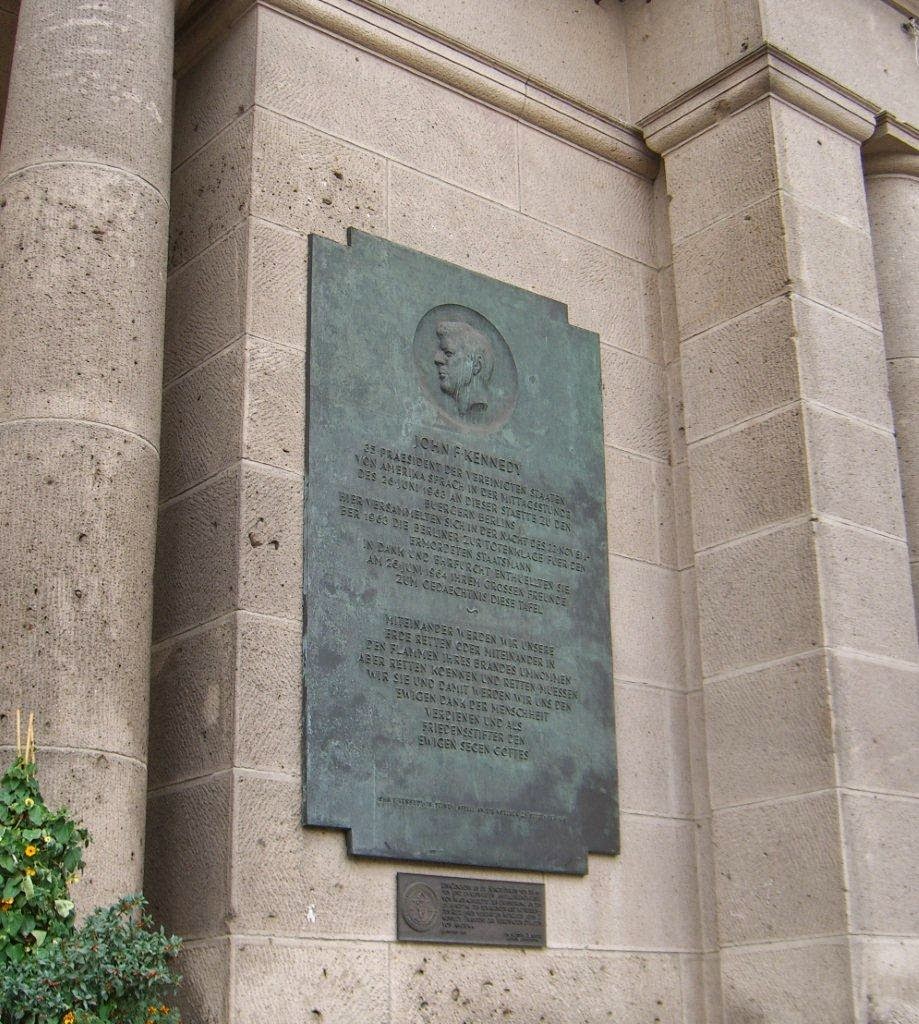 Rathaus Schoeneberg became the West Berlin town hall during partition, and a plaque on the wall commemorates John F Kennedy's visit in 1963

And then, in November 1989, all was changed. For so long, the thought that those who had effectively been imprisoned across the wall might be freed was the stuff of forlorn hope. But then, 25 years ago today, the border was opened, the guards forbidden from opening fire, and the people of East Berlin were free. 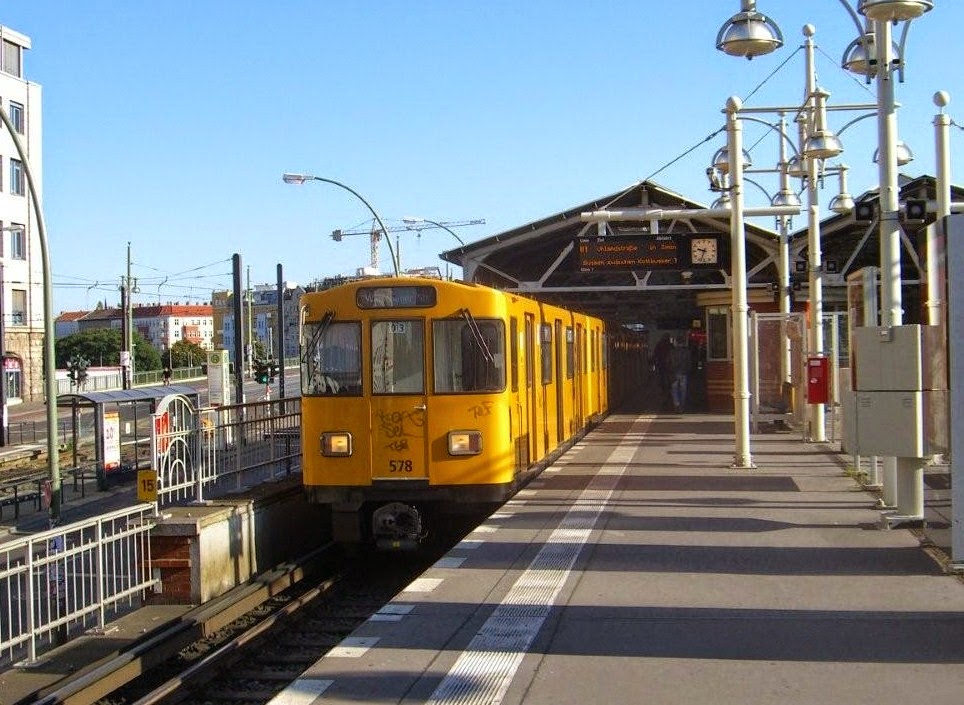 The U-Bahn terminus at Warschauer Strasse was just across in East Berlin, and therefore cut off from the rest of the system. It closed in 1961 and was not reopened until 1995

Berlin has been unified for almost that long, but the mark of the Wall can still be seen in places. I’ve included some photos that show the sad, and sometimes bizarre, way in which it divided this great city, which no-one should miss off their wish-list of must-visit city break destinations.

Ideological conflict causes otherwise rational men to do the least rational things. The division of Berlin stood as a testament to that. While we can be thankful that it is long past, we should ensure it never happens again.
Posted by Tim Fenton at 17:25

I urge anyone who visits Berlin to go and see the Stasi museum located in the vast complex that housed that infamous organisation. Another recommended site is the Berlin Wall museum located just across the road from the last remaining part of the wall in Bernauer Straße. Nearby you will find one of the "ghost stations". These were U-Bahn stations located in East Berlin but part of the western underground railway network.They were sealed off to prevent DDR citizens gainingg access to the trains.

I filmed in Berlin(East and West) in 1988, a trip that included being escorted by GDR border guards right up to the Brandenburg Gate, and again in 1990. To be able then to walk through the Gate was interesting for me, it must have been extraordinary for Berliners. I visited again last month and could hardly recognise the place. It is without doubt a must visit city for a short break or longer. Interestingly, the German experience with state surveillance esp by the Stassi has given them a great love of privacy. I saw hardly any CCTV cameras in the streets. An article in today's Observer tells how Berlin has become something of a haven for people resisting state snooping.

I would also add that to all those who claim that Christianity is somehow 'under attack', my Czech-born wife could tell you what it's like to be in a regime where organised religion is really under attack. Being religious there could cost you your job and affect your entire life, rather than merely resulting in being disapproved of or feeling somehow 'got at'.

There was also the Berlin Airlift in 1948/49 as the Soviets wouldn't even allow road or railway access for nearly a year.