It was all that the authoritarian right could have wished for: the official report into the brutal killing of Fusilier Lee Rigby in Woolwich last year named “an American Internet Company” that had failed to pick up on a message left by one of the killers expressing a desire to kill a soldier. The company was then revealed to be Facebook. War on Facebook was duly declared. 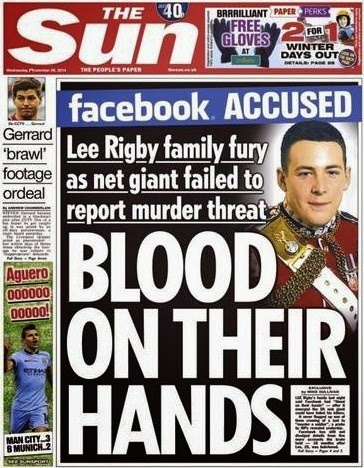 First with the ritual condemnation, because as any fule kno it is the paper that supports our soldiers more than all the others put together, was the Super Soaraway Currant Bun, ranting “Facebook ACCUSED ... Lee Rigby family fury as net giant failed to report murder threat ... BLOOD ON THEIR HANDS”. Yes, Sun readers, take the killer Facebook away from your kids RIGHT NOW! 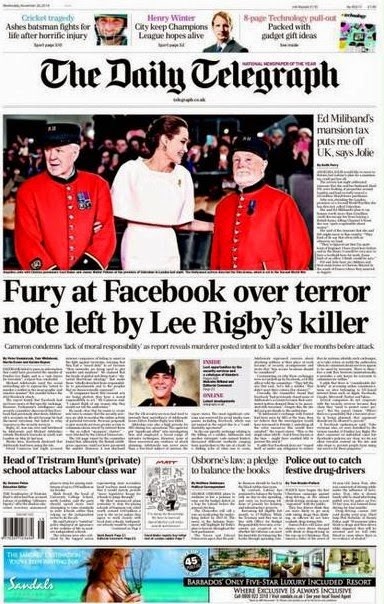 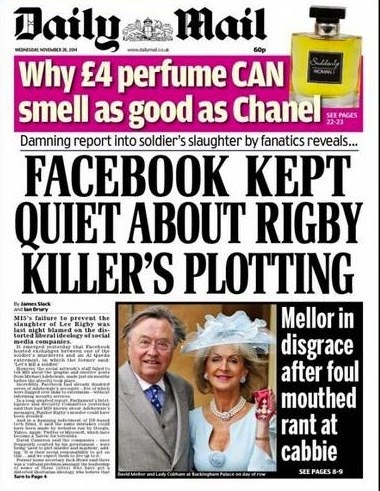 It was left to the Independent to draw the obvious conclusion: “The war on Facebook” was its headline. And Amol Rajan and his team are spot on: had Michael Adebowale used the Royal Mail to convey his message, they could hardly be held to blame for not opening the letter en route. Nor could a telecoms provider be accused for not knowing to listen in to his calls. 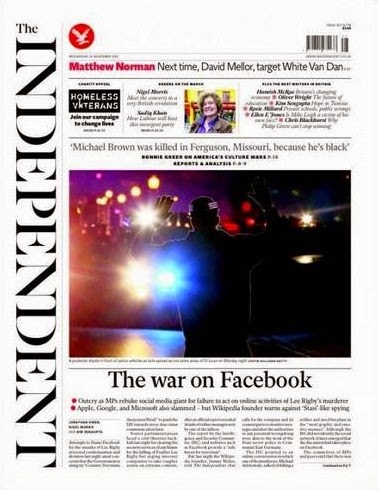 This ridiculous blame game could be taken further: someone sold the killers a car. Do they also have “blood on their hands”? A filling station provided the fuel that powered it. How about the owners? A number of food retailers kept the two plotters fed and watered. The conspiracies could be extended to provide hours of fun for the why-oh-why merchants. And it would be totally pointless.

There are two facts that the authoritarian press manages to either ignore or miss here: first is that Adebowale was about to be put under “intrusive surveillance” by the security services, but that it took several weeks to complete the admin work and by the time that was finished, Rigby was dead. That’s not good enough.

And the second is the idea that Facebook should spy on its users. Think about that for a minute: it is a platform available to all, just like any other publicly available communications medium. There is nothing preventing MI5 from accessing Facebook and doing its own monitoring. So why the hell didn’t they? Why shoot the messenger for the spooks’ inability to get with the technology?

That the predominantly right-leaning and authoritarian press doesn’t ask that question tells you all you need to know. Clueless, ranting technophobes all of them.
Posted by Tim Fenton at 10:47

"but that it took several weeks to complete the admin work"
Oh God. I suppose that means another tedious Littlejohn James Bond parody.
"I'll get after Blofeld and the missing H-bombs immediately Sir."
"Not so fast 007. There's several weeks admin work to do first."

And I imagine that FB, in all honesty, won't do a thing unless they're planning to already. They're, simply put, not accountable to the British government. And a China-style block would be electoral suicide.

the US and UK (and some others) don't have to have a Chinese/ Turkish style block of Facebook (or Twitter) to put pressure on.

They just have to ban companies advertising with them. At the end of the day they are commercial outfits where revenue is more important than opinion (just like Ryanair). They don't care what any person, politico or hack thinks - but cut their money off and things would change. Ryanair eventually tried to improve their image beause the PAYING public began to react but FB etc don't have a paying public, and the great British public will never boycott something that's useful and free.