As campaigning in the Rochester and Strood by-election drew to a close, the customary routine of canvassing was broken by the outrage machine that is the right-leaning tabloid press as it descended on Labour MP Emily Thornberry, who had observed a house decked in England flags, with a white van out front, in a manner which all passing instant judgment agreed was “snobby”. 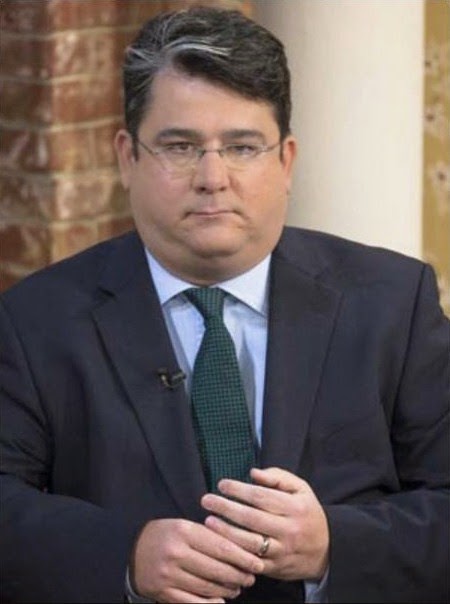 The Great Guido sits in judgment once more

The Super Soaraway Currant Bun was yet more forthright: “How to lose a by-election ... Snob Labour MP’s Twitter dig at White Van Man’s England flags ... Only Here For The Sneers”. Yes, Labour lost the by-election there – well, in the retelling, as of course it was down to the Tories and UKIP, not that this fits the narrative of Rupe’s downmarket troops, of course. 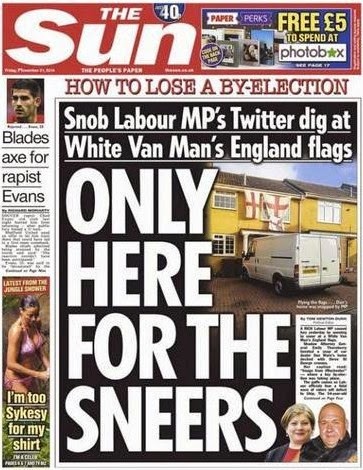 Sneering at the working class is bad ...

Was this enough cat-calling? Not for one group of Labour detractors: the perpetually thirsty Paul Staines and his rabble at the Guido Fawkes blog were in full cry. “Labour’s prosecco progressives openly despise the suburban aspirational middle classes and are privately condescending towards the working classes and their traditional values” declared the Fawkes blog yesterday evening.

That was after “Islington MP’s Rochester Culture Shock” and “This Is Emily Thornberry’s £2 Million Islington Mansion” (yes, I know, Staines and his wife have at least four properties of their own, including two in London). But The Great Guido is not averse to a little sneering at the working class himself, as witness this extract from his own personal Twitter feed. 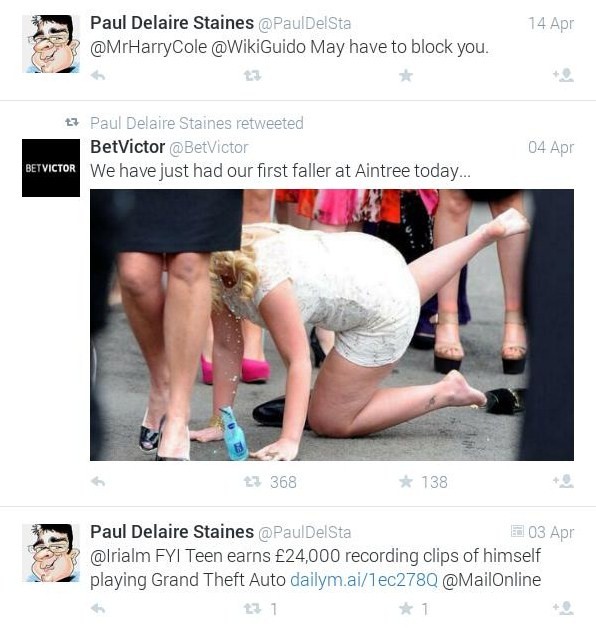 Staines’ own Paul Delaire Staines feed (@pauldelsta) clearly found one Tweet from the Bet Victor account so clever that he Retweeted it. This shows a young woman falling over at the Grand National meeting, with the caption “We have just had our first faller at Aintree today”. That would be a horse racing meeting where ordinary working class people go to enjoy a day out.

Staines is being doubly hypocritical: sneering at the working class, plus making fun of someone who may have been imbibing (that is, after all, an alcoholic drink that she has apparently dropped). The Great Guido and the falling over water are no strangers to one another. Or perhaps it’s different when it’s a Labour politician, and Staines and his pals doing the sniping.

Let he who is without sin, and all that. Another fine mess, once again.

[UPDATE 1240 hours: my thanks to one Twitter user who remembered yet another example of the Fawkes rabble sneering at the working classes, this one from July 2012, and courtesy of the odious flannelled fool Henry Cole. 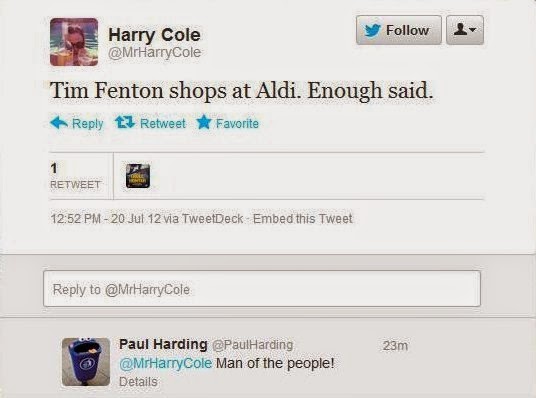 Master Cole observed "Tim Fenton shops at Aldi. Enough said". Clearly the Westminster bubble's very own Loadsamoney faction considers the kinds of supermarkets frequented by all those hard working people that the press claims to support is beneath them.

Why were the flags up anyway? I wasn't aware that the England football team was about to get another thrashing.

Get back Fido!
with your short on fact and your low level cunning
Get back home Fido!

The media lynching of Ms Thornberry really is, gulp, it hurts me to write this.....Political correctness gone MAD. Never thought I'd ever write that.

Aldi is good, and people who shop there are clever enough to know that. I think I probably said that back in 2012 too. They've got all their tasty Christmas treats coming in in the next few days too, which is even better.

Anyway, I'm not sure of the point of Thornberry's picture tweet (that sure is a house!) but I think it's a shame that Farage can go on the radio and say racist things and we're all told to respect his right to free speech - but Thornberry tweets a picture of a house (no words, just a picture) and we all must gasp and swoon at the shame of it. Not that there's any media bias.

point of order here (and Arnold was close):

One of the "England" flags has been defaced for the benefit of supporting West Ham. So is Thornberry going to be accused of insulting West Ham fans? And is the Sun going to say anything about a flag being defaced - probably not because they also use defaced flags for promotional purposes.

Was there any sneering when P Staines took some of his pals to look at a photo of John Prescott in the window of an Indian restaurant at Kennington Cross?