The ability of the legendarily foul mouthed Paul Dacre and his retinue of overpaid attack poodles to indulge in breathtaking hypocrisy while remaining righteous and indignant has been confirmed today with a triple helping of trashed glasshouses led by tedious and unfunny churnalist Richard Littlejohn, who has been ordered to kick Guardian writer Jack Monroe for allegedly mocking the disabled. 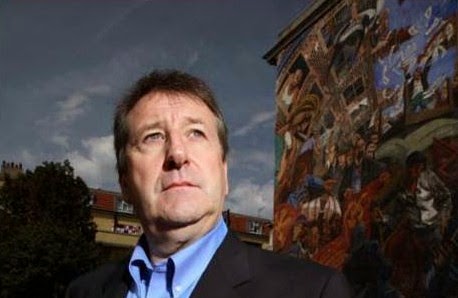 Of course, Ms Monroe has done no such thing, but Dicky Windbag never lets such details get in the way of a good rant. But the thought occurs that The Sage Of Vero Beach has very little room to scold others for their attitude to disability, and here on Zelo Street, Dick’s nasty campaign against the disabled has featured more than once in the past, not least his smear of wheelchair-bound campaigner Jody McIntyre.

Littlejohn claimed he was not making light of McIntyre’s disability, then told “Jody McIntyre is like Andy from Little Britain”. That’s right, he said that McIntyre was faking his disability. And it wasn’t the only smear: when the Vagina Monologue wanted to hatchet the Motability scheme, there was Littlejohn telling his readers that the disabled were “given a free car on the taxpayer”.

He wasn’t finished: there was the claim that “There are now 3.2 million people claiming long-term disability, even though they are perfectly able to do some kind of job”. The figure was actually those claiming an out of work benefit, and the claim purely malicious, clearly intended to demonise a group of vulnerable people. Not that the million pound hack gives a flying foxtrot about them, of course.

And Dicky Windbag is not the only source of Mail hypocrisy today, as witness Tamara Cohen wailing “Labour’s class war on private schools with threat to cut £700million tax breaks if they do not help state schools”. She went on “Critics will argue that this approach will only force private schools to raise their fees ... One private school head teacher has already warned that fees are now so expensive they are being used as ‘finishing schools for the children of oligarchs’”.

“Children of oligarchs”? Children of Daily Mail editorial staff, more like: small wonder Dacre wants a negative slant on Hunt’s speech. He is interested only in trashing the reputation of the state education sector, and defending the freedom of Himself Personally Now to send his sons to Eton.

But the icing on the cake has to go to Max “Hitler” Hastings, taking a break from appearing on TV and going on and on and on and on and not letting anyone get a word in edgeways, to condemn Formula 1 World Champion Lewis Hamilton for waving the Union Flag but not paying tax in the UK. Rather like Lord Rothermere, then – you know Max, the bloke who owns the paper you’re writing for.

The Daily Mail – a veritable cesspool of stinking hypocrisy. No change there, then.
Posted by Tim Fenton at 10:34

The Hastings article concentrated on the awarding of honours to non-doms. I wonder if a certain unrecognised (so far at least) editor was dictating it. The obligatory dig at Mrs Pitt and her damehood certainly suggests so.

"No parent ever gets over the loss of a child. It is especially tough on the mother who has brought that precious life into the world.
What makes Jack Monroe think that Samantha Cameron isn’t worthy of human compassion?"

Yes Richard, Samantha Cameron is worthy of compassion but while we're on the point Dicky, what makes Jan Moir think that Steven Gateley's mother isn't worthy of human compassion?

Moreover, what makes *cough* Richard Littlejohn think that the mothers of the five women murdered in Ipswich aren't worthy of human compassion?