The Mail has made a startling discovery: the level of the River Parrett, which flows through the Somerset Levels, passing through Burrowbridge and Bridgwater, is very close to that recorded last January, at the height of the floods. “A county living in fear: Somerset Levels on red alert for another round of severe flooding after storms with winds up to 93mph batter the west”, readers were told. 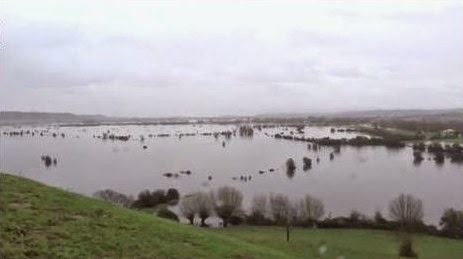 There was more: “There were growing fears last night that the Somerset Levels could face another round of severe flooding ... rising water levels left locals dreading a repeat of last winter’s floods. Somerset’s groundwater levels are now the second-highest for November since records began 45 years ago, according to the British Geological Survey (BGS) – after peaking in the last round of floods”.

This is potentially very bad news for two groups of people: mainly those who live on the Levels, and to a lesser extent all those gobby pundits who spent much of last Winter telling anyone connected with the Environment Agency (EA) that they had got it all wrong, the dastardly EU was ordering the flooding, the rotten lefty greens were in on the conspiracy, and all it needed to sort the floods was dredging.

Yes, remember dredging? This would solve all problems, especially as all those metropolitan liberal academic types said otherwise. And we know this because it was all in the same paper that is now telling readers how high the river levels are, and before winter really takes hold – the Mail, which gave a platform to serial fraud Christopher Booker last January.

“It’s the deluded Greens who’ve left my Somerset neighbours 10ft under water” he ranted, telling Owen Paterson that his actions “must begin with a resumption of dredging the rivers needed to carry the water all the way to the sea”. All those EA ideas about restoring flood plains to hold runoff water were rubbish. Dredging was what was needed. And dredging was what they got.

The River Parrett has been dredged, at a cost of £6 million. But already the water levels are almost up to last Winter’s peak. So what are Booker and all the other quack doctors going to recommend now? Who will they blame, now they have got their dredging and the river levels are still rising? And who is going to find the £6 million for the next dredging?

Yes, if you’re going to dredge properly, it has to be done after each flood. George Monbiot at the Guardian estimated that dredging might increase the percentage of flood water that the rivers could take out of the Levels from 2% to 4%. That still leaves 96%. The larger amount was what the EA was concentrating on. But the Mail wouldn’t listen. Now they have seen the result of their lobbying.

Another wet spell and the Levels will flood, and badly. Hello Daily Mail.
Posted by Tim Fenton at 17:26

And this is after what most agree was an excellent summer. August was wet, but Sept and October were very dry. Climate change is happening and as Cnut showed you cant stop nature. The folk of Somerset need to rethink their strategy and look towards the Low Countries for water management solutions, which will include thousands of acres set aside for water inundation.

Much building over low fields around Bridgwater both housing & industrial where water can no longer soak in, get more rainfall less soil to soak away & flood on edges what might happen? no expert but I see what has been covered in last few years!

Dredging has allowed water to regress much more quickly after the recent heavy rain...yes the rivers went up but they are now falling steadily.