According to this week’s poll from Michael Ashcroft, former Tory MP and recent convert to UKIP Mark Reckless holds a twelve point lead over the official Conservative candidate Kelly Tolhurst in the run-up to next week’s by-election. But, while the Tories are going into negative attack mode against Reckless, they seem to have missed one of the local Kippers’ larger whoppers. 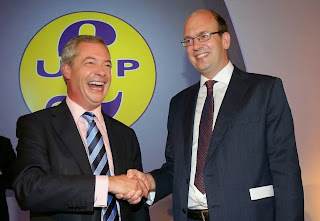 Reckless, although he apparently made no objection to it when he was a Tory, has attacked the provision of a bus-only road at Strood Riverside, which is part of the local “Quality Public Transport Corridors” – making buses more reliable and thereby encouraging more people to use them, leaving cars at home. The road also provides space for pedestrians and cyclists.

The Kippers don’t like that at all: “Joining the campaign for UKIP’s Mark Reckless in Rochester & Strood today, Jill Seymour MEP and UKIP Transport Spokesman strongly endorsed the campaign to open the £13 million Medway Tory ghost road” declared Reckless’ campaign website late last month. However, and here we encounter a significantly sized however, the road is not closed.

So it would be difficult to open it, as it is already open. Moreover, the Kippers do not tell how they would accommodate all the extra traffic that will be generated by their proposed free-for-all, but then, thinking through their policies is not UKIP’s strongest suit. Then we come to the whopper, and it’s a big one: Reckless maintains that the road has cost the eyebrow-raising sum of £13 million.

The claim is all over Reckless’ website. What’s the real number? Here’s the Council blurb from 2010: “Strood Riverside – provision of a new link between Canal Road and Commissioner’s Road for buses, pedestrians and cyclists only; this will also serve as an emergency route from the future Strood Riverside development and is essential enabling development for the site; estimated cost - £1.3M”.

Yes, UKIP has achieved its Big Scary Number by simply moving the decimal point. The new link was part of a number of measures which, in total, added up to £13 million. Locals have challenged Reckless and his campaign team to admit they got it wrong, but answer there has been none. My information is that local Kippers have not even bothered to acknowledge requests for clarification.

What is worse, I’m also told that local Tories haven’t called Reckless and his pals out for the claim. You might think that, with only a week to go before they might lose a second Parliamentary seat to UKIP, they would be bringing the voters’ attention to the Kippers’ burning trousers. But no – instead, Young Dave is desperately telling Labour and Lib Dem supporters to vote for his candidate. Which they won’t.

The Tories: so useless they don’t deserve to win. No change there, then.
Posted by Tim Fenton at 13:02

A UKIP Britain, what a wonderful place that would be...not.