Richard “Dirty” Desmond’s newspapers have been subjected to yet another round of staff cuts recently. They were already being run on a shoestring compared to their competition – the Mail, Mirror and Sun – so how would they manage to produce half-decent papers now? Will the original stories still appear? Would the supposedly flagship Express still have any credibility? 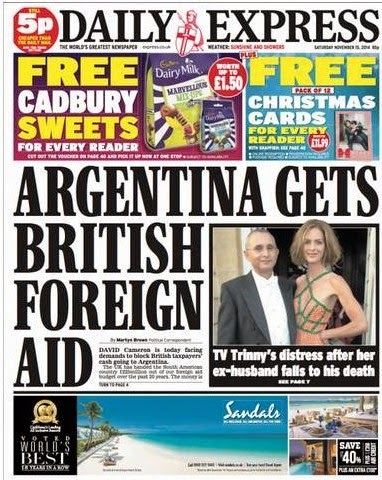 And, from yesterday’s abysmal showing by the Express, the answers would appear to be that they wouldn’t, no they won’t, and no it doesn’t. Because yesterday’s lead story – “Argentina Gets British Foreign Aid” – is not merely the previous day’s news. It is nothing short of a con trick on the readership: this story was aired, discussed, and then put to bed a matter of years ago.

Look first at the Express story, which tells “Outrage as Argentina milks millions out of UK foreign aid budget ... DAVID Cameron is today facing demands to block British taxpayers’ cash going to Argentina” and goes on to say “The UK has handed the South American country £225million out of our foreign aid budget over the past 20 years”. The “outrage”, however, is restricted to one Tory back bencher.

So what is driving the story? Here’s a hint: “A poll by campaign group the Tax-Payers’ [sic] Alliance shows British and European voters want their governments to withhold the loans”. The so-called Taxpayers’ Alliance (TPA) no longer has the posts on its website. That may be because their campaign took place, and ended, more than two years ago. That’s why the Express is conning its readers.

Although the TPA has taken its copy offline, the Mail has its version available, for example “Calls to stop British aid money pouring into Argentina: Country owes UK taxpayers £225MILLION” (same figure as the Express), from June 2012. Anything  older than that? You betcha, says Sarah: there’s “Britain hands Argentina £27million in aid through EU and IMF schemes as Buenos Aires orders boycott of UK goods”.

That article is from March 2012. And, even then, it’s not the oldest evidence of the Argie-bashing. TPA co-founder Matthew “Gromit” Elliott submitted a post for Mail Online titled “Why are we sending aid to Argentina when it threatens British interests?” in September 2011. So, not to labour this point too much, the story of Argentina getting aid from the UK is more than three years old.

And that is why Justine Greening told the Express “I toughened up our policy ... several months ago”. Now, the Express is as free to publish what it likes as any of the rest of the press. But when you expect readers to pay money for your paper, one might expect a smidgeon of originality, rather than serving up a three year old story and pretending it’s current, rather than done and dusted long ago.

But if Des is making money off of it, that makes it another Benchmark of Excellence!
Posted by Tim Fenton at 11:08

And today's Sunday Express comes up with a similar whopper.'End of the TV licence'. Its two sources for this are two rentaquote BBC hating MPs, Andrew Bridgen & Philip Davies. plus a spokesperson from the highly dubious 'Freedom Assoxiation's Axe the Tax Campaign'.

In truth this is story nowhere near the truth. Nothing will happen until after the election and the BBC charter review will then begin. Only then will the results of a public consultation into the licence fee be brought into play. The BBC and others (including many of the commercial TV companies who do not want to see their income eroded) will make a strong defence of the licence fee.

The retention of the licence fee is pretty safe for a few years yet.