Smear The Mil – Tuppence A Lie

As if one needed reminding that the right-leaning part of the Fourth Estate are frightened shitless of the prospect of Labour winning next May’s General Election, along came a prime example as Mil The Younger’s gesture of generosity towards a homeless woman on the streets of Manchester was turned into a barrage of sneering, judgmental abuse and cat-calling. 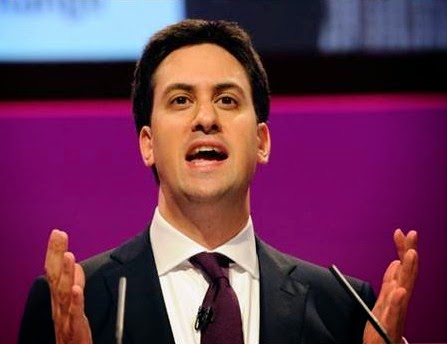 Miliband was committing the heinous crime of Walking On The Cracks In The Pavement, and with clear malice aforethought, when he responded to the outstretched cardboard cup by dropping some coins into it. This was, of course, wrong. Had he simply passed by, that too would have been wrong. And, worst of all, he did not perform the act stylishly enough.

If this sounds ridiculous, that is because it is: the Labour leader was condemned for “looking awkward” or even “terrified”. Well I never: there is clearly a style manual for donating to the homeless. There is also an acceptable level of donation. You didn’t know that? Time you all sharpened up! Everyone knows that, if only in the retelling, and they also know that Miliband failed the test.

Well, the Daily Mail knew: “Toe-curling encounter sees Labour leader drop just 2p into homeless woman's cup”. Really? Let’s see what the article actually says, shall we? He “appeared to drop just 2p into a cup”. Never mind though, the Mail also nails him with “failed to even make eye contact”, but then has a photo of Miliband very clearly making eye contact to make sure he’s put his coins in the cup. 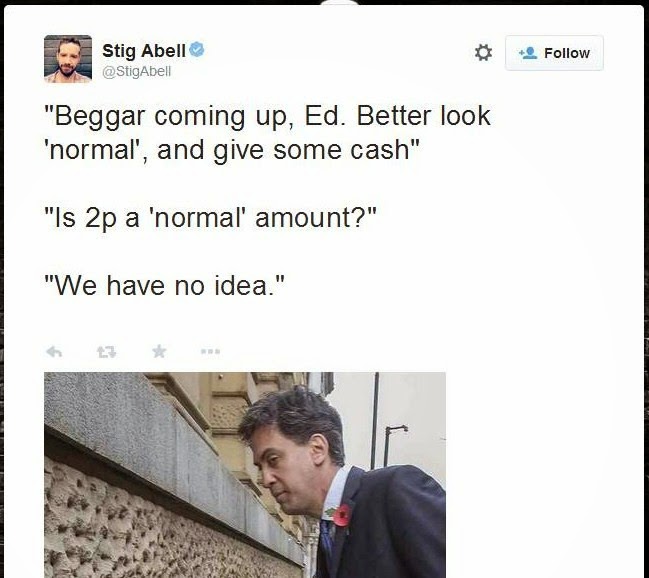 It doesn’t get any better over at the Telegraph, where the reduction in staff has been matched by an equivalent increase in desperation to find something – anything – to fill those big broadsheet pages. “Labour were forced to deny that Mr Miliband had given the woman ... just 2 pence”. I mean, “critics on Twitter were unconvinced”. Yep, the Tel is that desperate right now.

So is the Sun, as Stig Abell has demonstrated. But where did the “2p” story originate? As if you need to ask: the perpetually thirsty Paul Staines, the odious flannelled fool Henry Cole, and newly anointed teaboy Alex “Billy Liar” Wickham at the Guido Fawkes blog concluded thus, despite their photo showing Miliband with at least two coins, neither of which was slim enough to be a 2p piece.

Never mind, though, The Great Guido knows that his lies are off and running before mere facts get their shoes on. After all, beggars are for kicking, aren’t they, Fawkes folks (this is alluded to HERE)? All those braying right-wingers are deliriously sneering “tuppence”, while not realising that they are broadcasting to the world how frightened they are of Miliband. Poor dears.

In other news, the real world was a day older. Boring but true.
Posted by Tim Fenton at 10:53

How on earth would they have reacted had he given the woman a bacon sandwich? That still remains the nadir of desperate Ed bashing.

The story gave a great opening for the anti-Semitics on the Guido story...

Vhat is rong with giving her that much money already?!