The right-leaning part of the Fourth Estate has, since the elections to the European Parliament (EP) earlier this year, been soiling its collective trollies as it tries to figure out what to do about Nigel “Thirsty” Farage and his fellow saloon bar propper-uppers at UKIP. That would be the same part of the press that gave the Farage fringe all that free publicity and shilled for their pet project. 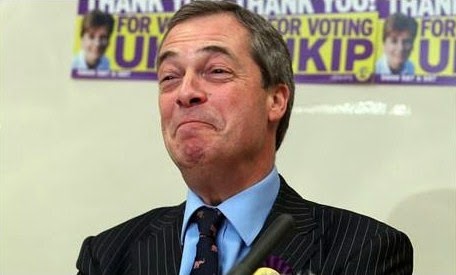 Yes, somehow it didn’t occur to those who scrabble around the dunghill that is Grubstreet that once they let the UKIP genie out of the bottle, by their incessant demonising of the EU, it would not be possible to just ask it nicely if it wouldn’t mind turning round and going back in. The result is a significant weakening of the Tories’ electoral prospects – the team the right-wing press wants to win.

What to do? Simples. The call from pundits, and those wanting to project the values of their editors and proprietors, has been to tell Young Dave to form some kind of alliance with the Kippers. This is, however, easier said than done, especially after Cameron – rightly – called them “Lunatics, fruitcakes and closet racists”, the last quality not helping Mark Reckless in his fight to return to Parliament.

The Kippers loathe the Tories. The feeling is mutual. A pact would haemorrhage UKIP support away to Labour and the Lib Dems – anything to stop the Tories benefiting. Tories at the centre would do likewise. Yet still the pundits plead, as witness the loathsome Toby Young proposing “Vote Exchange day - a radical new plan where UKIP supporters and Tories swap votes to keep Ed out of No 10”.

Yes, Tobes wants to see not just a Tory Britain, but a Britain built on Bellends. And he is not alone: in support have been Simon “Enoch was right” Heffer, no doubt being leant on by the legendarily foul mouthed Paul Dacre, concluded that the Tories “will have to consider an electoral pact with Ukip, or face at least five years out of government”. But nobody was listening to him either.

Dacre also urged Jack Doyle over the top to tell “A pact could, for example, consist of a series of local deals where Ukip would agree not to stand against a Eurosceptic Tory. Or the two parties could even band together across the country”. His call was reinforced by Dan, Dan The Oratory Man, frightening readers with “Only a Tory-Ukip deal can stop Labour winning power”.

Then it only took Young Dave saying “Until [the] election is over, you won’t get me speculating on what would happen if I fall short” today to have the Telegraph projecting this daft idea on to him: “David Cameron won't rule out Ukip deal in hung Parliament”. He said nothing of the sort, but the right-wing press is so frightened of Mil The Younger that it will cling to any sign of hope, however fleeting.

You built UKIP up, press people. It’s your problem now. So deal with it.
Posted by Tim Fenton at 17:23

Toby Young's vote exchange day reminds me of something.

The press really don't care who is in No. 10 next May. They have papers to fill and any incumbent will provide copy especially if there's a coalition with UKIP.