When Esquire magazine ran its profile of the perpetually thirsty Paul Staines and his rabble at the Guido Fawkes blog, readers were told, of his tame gofer, the odious flannelled fool Henry Cole, “By reputation, he is also something of a man about town – or at least the Westminster village”. Staines went further: he was, he inferred, slightly envious of his deeply unsavoury sidekick. 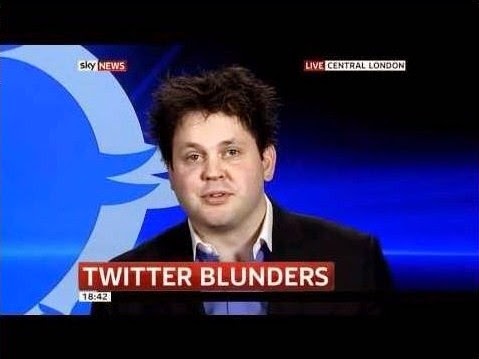 The irresistible man about town. Or maybe not

“I want Harry’s life. He gets to shag all the girls, he’s famous in Westminster, he’s not badly paid and he half does it all for fun anyway” he told his interviewer. Here on Zelo Street, that slice of hokum caused a more than a little amusement: Master Cole, for someone who is “something of a man about town” who “gets to shag all the girls”, gives every impression of not quite deserving his own publicity. 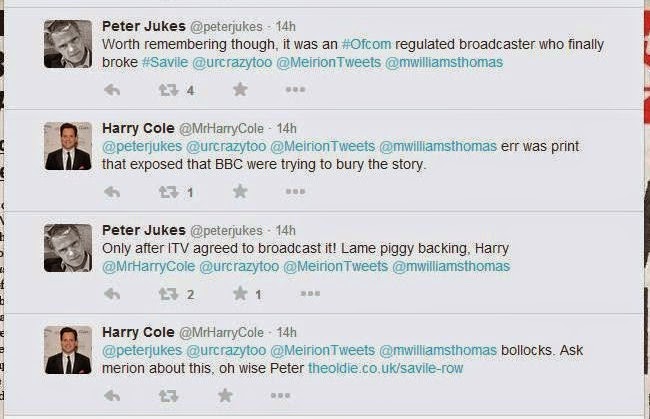 Yesterday evening – when one might expect “something of a man about town” to be out and about in pursuit of all those girls he is allegedly shagging – Cole leapt into a Twitter conversation involving journalist and playwright Peter Jukes, whose recent book based on his live Tweeting of the Hacking Trial, Beyond Contempt, is still available. Especially if you missed the BBC Radio adaptation. 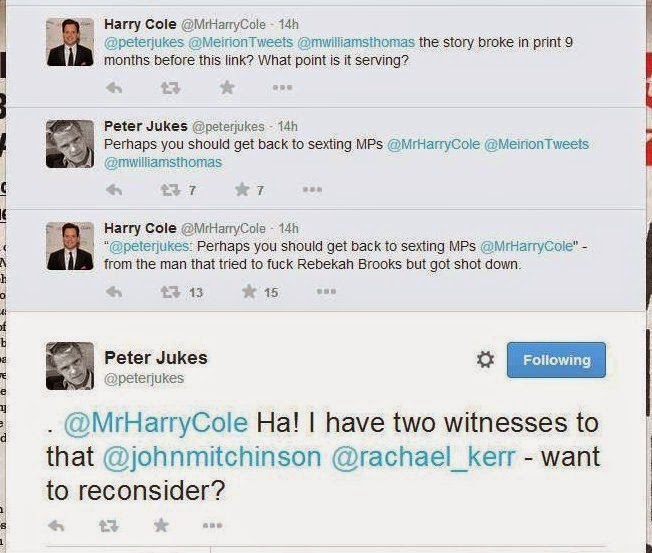 As so often, Cole was doing the bidding of his new masters in the press, on this occasion pretending that the Jimmy Savile story was not broken by the broadcast media. Despite being informed that he was indulging in “lame piggy-backing”, he suggested Jukes might find a discussion with Meirion Jones informative. If only he could have spelt the latter’s name properly. 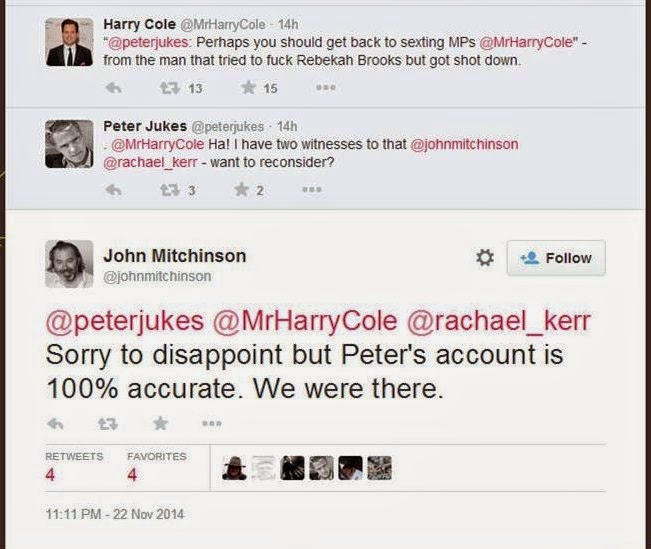 Jukes – whose book launch Cole reportedly intended to gatecrash, only to find he was in Scotland that evening (minor problem, eh?) – soon tired of the flannelled fool’s idiocy, and suggested “Perhaps you should get back to sexting MPs”. Cole’s counter was “from the man that tried to f*** Rebekah Brooks but got shot down”. Jukes, readers will not be surprised to learn, never made such a claim. 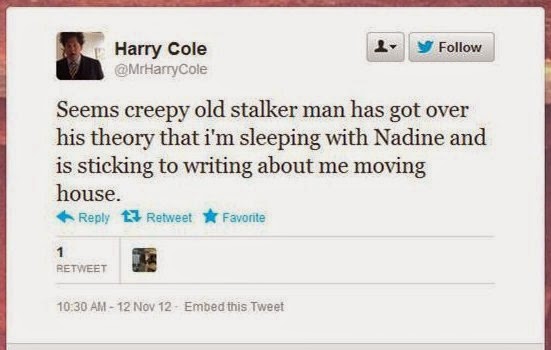 Moreover, one of those present at Hay-on-Wye that evening backed up Jukes’ account, which is available at the Staggers site. Zelo Street readers may have noticed the parallel with Cole’s outburst at me, “Seems creepy old stalker man has got over his theory that I’m sleeping with Nadine [Dorries]”. As with Jukes, there was no such suggestion made. He’s just making it up.

What we have here is, far from “something of a man about town” who “gets to shag all the girls”, a singularly sad individual apparently reduced to spending Saturday night trolling other Twitter users, as well as lying badly in order to demonstrate his adherence to Olbermann’s Dictum (“the right exists in a perpetual state of victimhood”). Who would want a life like that?

Still, it gives the rest of us something to laugh at. A flannelled fool, indeed.
Posted by Tim Fenton at 11:47

A bit unfair could give cricketers a bad name.

On second thoughts some of the English team could give him a run for his money. Cutting it fine with all those slips and dropping all those dollies (allegedly).

Suggest he ducks for cover or he'll catch it from La Mensch with some googlies from long leg after raising a few silly points.

Howzt! Out trying to sneak a fast one?