Nigel “Thirsty” Farage and his fellow saloon bar propper-uppers at UKIP should be on a roll right now: they’ve succeeded in getting Douglas “Kamikaze” Carswell re-elected to Parliament on their ticket, and it’s looking like they will get Mark Reckless re-elected later this week. So what do they need like a hole in the head at this moment of history? A bit of splitting and bloodletting. 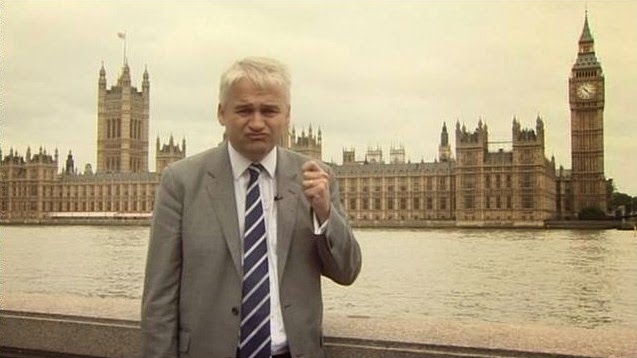 They told you to jump in there, did they?

But that, it seems, is what they are getting, as some on the Farage fringe have decided that economics spokesman Patrick “Lunchtime” O’Flynn, formerly of the Daily Express and so no stranger to political la-la land, should go. The dissenters are being encouraged just a teensy bit by Tory Party supporters, like Mark Wallace at ConHome, who are having difficulty hiding their enjoyment of this development.

“It’s a month since we launched our Pinning Down Farage series with the question ‘What is UKIP’s economic policy?’” observed Wal, knowing full well that it is not just Tory supporters who would very much like an answer to that one. There was more, though: “It also put into print concerns that have been circulating inside the ‘People’s Army’ for some time about the direction and coherence of the policy set by Patrick O’Flynn MEP, the UKIP Economy spokesman”.

There is “direction and coherence” of UKIP economic policy? I missed that one – the impression was given that “Lunchtime” would articulate an idea, usually to fend off those who pointed out that the Kippers’ sums didn’t add up, only for Mr Thirsty to finish his pint of Landlord and say it wasn’t going to happen.

But what gives the attack on O’Flynn added piquancy is that the batshit collective otherwise known as Breitbart London, usually supportive of anything emanating from UKIP, has weighed in, and said in forthright terms that “Lunchtime” should go. The author of the most trenchant attack is James “saviour of Western civilisation” Delingpole, who clearly has his sneer set to maximum volume.

“Why is Patrick O'Flynn, the economics spokesman for Britain's most libertarian mainstream party UKIP, flirting with the kind of wealth taxes and turnover taxes you'd more usually associate with the Greens or the Socialist Workers' Party?” he asks, adding “O'Flynn read economics at Cambridge - but so too did John Maynard Keynes and look where that landed us”. For Del Boy, things like bringing down unemployment and not using the currency as a virility symbol are anathema.

Del says “Lunchtime” has to go, and he has the ideal replacement: “The solution is staring the party in the face. No one understands the economic problems facing Britain better than Douglas Carswell. By happy coincidence, he happens to be UKIP's first elected MP”. Yeah, right. Stop giggling at the back.

UKIP’s take on economics is barking. This split will just help more people know that.

[UPDATE 18 November 1020 hours: Peter Oborne at the Telegraph has spelt out exactly what binning "Lunchtime" O'Flynn would to to UKIP. "Firing Patrick O'Flynn would signal the start of UKIP's slide back into fringe insignificance" he observed.

And he makes this very telling point: "Mr O’Flynn’s emergence as a senior figure within the party has coincided with an exponential growth of party support amongst working-class voters, especially in the Midlands and the North". Does Mr Thirsty want to bring more of those usually Labour supporting voters over to his cause, or what?

What would benefit UKIP most, all those extra votes in the Midlands and North, or retaining sufficient ideological purity to satisfy Delingpole? The answer will not make happy reading for Del Boy]
Posted by Tim Fenton at 17:21