The inmates at Northcliffe House hate any other media organisation getting a story before they do, and if it’s the hated BBC, they become positively incandescent in short order. So when the Beeb got an exclusive on the raid, earlier this year, of Cliff Richard’s place in Berkshire, there was faux outrage. Whatever it was, he couldn’t have done it, because the BBC is always wrong. 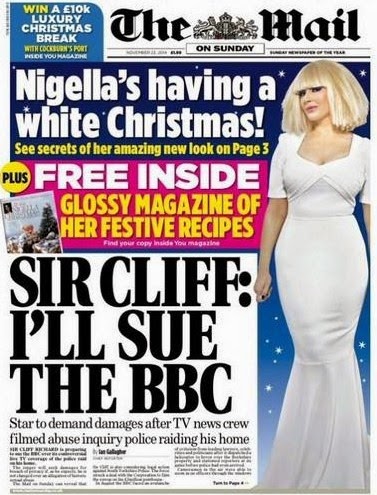 So it was no surprise to see yesterday’s Mail On Sunday rant “Sir Cliff: I’ll Sue The BBC ... Star to demand damages after TV news crew filmed abuse inquiry Police raiding his home”. But, as Captain Blackadder might have observed, there was only one thing wrong with this idea – it was bollocks. To no surprise at all, the story does not contain one word from Cliff.

This means he has not said “I’ll sue the BBC”. The best the MoS can manage is to quote “Friends”, who “say Sir Cliff is now determined to launch a concerted fightback”, and that “One legal expert said last night that the level of intrusion meant Sir Cliff would have a ‘strong case’ and added that the BBC would struggle to mount a public interest defence”. And that’s that.

So, mindful of the lack of substance in its sister paper’s splash, the Daily Mail has run with the story – showing that this is a co-ordinated hit by both weekday and Sunday title – but talk of legal action is qualified: “it was claimed Sir Cliff, 74, is preparing to sue the broadcaster over its live TV coverage of the search of his home ... The singer is expected to seek damages for breach of privacy”.

Claimed and expected by the Mail’s sister paper, that is. But onwards and, er, onwards, eh? Instead, the daily title switches to the emails that have been obtained through Freedom of Information (FoI) requests. “How the BBC colluded with police to spin their way out of trouble over raid on Cliff”, readers are told. Yes, two people agreeing a course of action via email is collusion.

“Top executives at the BBC worked frantically with police behind the scenes to spin their disastrous coverage of the raid on Sir Cliff Richard’s home, it emerged last night ... The Corporation was plunged into a huge row over its cosy deal with police after it was allowed privileged access to a search of the singer’s £3million Berkshire home”. Bullshit. There was an email discussion. That is all.

Moreover, the Mail clearly has no problem if it is another newspaper – well, apart from the deeply subversive Guardian, of course – that does the deal with the rozzers. What has the Beeb done wrong here, apart from got in before the press had a sniff? It wouldn’t be such a heinous crime if the Mail had received the tip-off. In fact, it wouldn’t be a crime at all in those circumstances.

One rule for the Mail, one for everyone else. No change there, then.
Posted by Tim Fenton at 15:08

I wondered why this came up in Nick Ferraris LBC show this morning.

Anything that obsesses the Mail - no matter how peripheral to current news events - always seems to makes it into Ferraris show.

Not being in range of local London radio stations, it was quite some time before I cottoned on to the significance of the Ferrari N radio interviews featured on the Private Eye CoAc page.