Fresh from their less than successful touting of White Van Man’s agenda for the British economy, which suggested beating schoolchildren and taking a “send them back” approach to migration, Rupe’s downmarket troops at the Super Soaraway Currant Bun are still looking for any excuse to kick Labour MP Emily Thornberry, because, well, she’s a rotten leftie, so there.

To this end, their Head of PR Dylan Sharpe has taken to Twitter in a routinely dishonest display by telling anyone listening that “‘Van driver’ bro of Em Thornberry who ‘put the record straight’ is actually a trendy fashion photographer in New York”. That would be a difficult one, given that Ben Thornberry is at present working in the London area for a charity, and certainly not in the Big Apple.

Indeed, as the deeply subversive Guardian has told, “He now works for a charity that helps disadvantaged young people find work in the construction industry”. He previously spent many years working in the USA as a builder, and also a photojournalist – in other words, he had a varied skill set, something that Sun hacks will have difficulty getting their heads round. 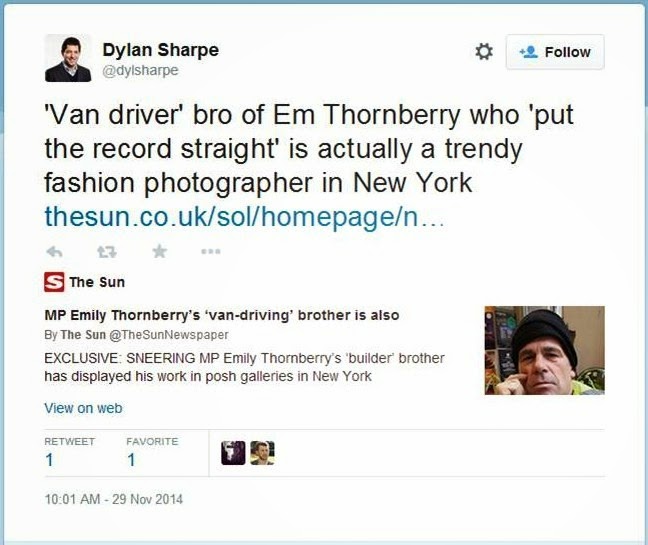 This means that Dylan Sharpe has crossed that line that divides PR, however questionable its factual accuracy, from outright lying. So what else have the Murdoch doggies got on the unfortunate bloke, whose heinous crime has been to give an interview to the Islington Tribune? Well, he’s in Islington for starters, which, as any good right-wing hack knows, is A Very Bad Thing.

And the Sun has decided that he is not the genuine article, and so smears him with “MP bro’s phony here for the sneer”. Claiming an “exclusive”, despite two papers having run the story already – no need to pay for the paywall and the right-wing spin, then – Daniel Sanderson tells readers “SNEERING MP Emily Thornberry sent her brother out to talk about life as a ‘van-driving builder’ — but he is also an arty photographer”. And, as Jon Stewart might have said, two things here.

One, Ben Thornberry gave the interview to the Islington Tribune of his own free will – he wasn’t “sent out” by anyone. And if anyone is sneering, it’s the Sun, performing its own particular act of snobbery by belittling the craft of photojournalism – which is, let’s not forget, what keeps that paper in business.

“Arty photographers” provide the Sun’s fashion and feature pics – yes, including Page Three. That is the level of jaw-dropping hypocrisy to which the Murdoch faithful have had to sink to stand up their angle on this story. But those “arty photographers” are OK, because the Sun approves of them. If they ever have to use Ben Thornberry’s services, that really will put them in a very difficult position.

The Sun: dishonesty and hypocrisy passed off as journalism. No change there, then.
Posted by Tim Fenton at 13:07

There's also the beautiful contrast between 'sneering at the working class' and the Sun's assertion that it's not possible to be a REAL van-driving builder and also have some skills in photography or to have lived abroad.

My brother is a plumber and an art photographer. He's covered in tatoos, was a house husband before he got his job and still helps his wife do the housework. Why the presumption that if you are a builder etc that you can't be interested in art or travel and do housework and childcare. Really annoys me.

Some years ago, there was a carpenter who preached sermons about how people should behave towards one another. Does Rupe and Co know his name?