Sarah “Vain” Vine wants her Twitter followers to know that she is a patriot. In fact, she is so patriotic that she is still displaying a poppy on her Twitter avatar even though Armistice Day was a fortnight ago. What the Daily Mail pundit otherwise known as Mrs Michael “Oiky” Gove also has no trouble in telling the world is that she takes to Twitter late in the evening. 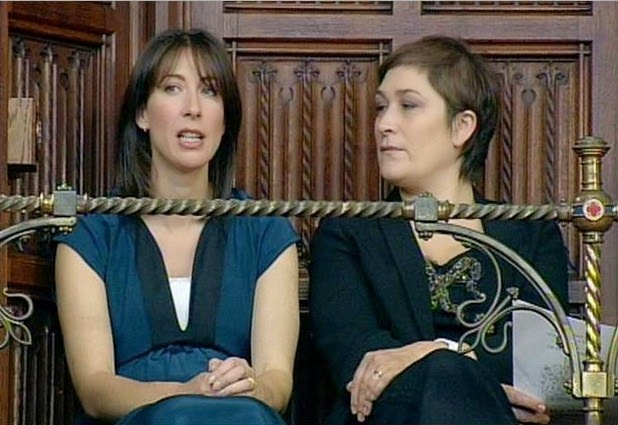 No point being envious Sarah, your husband definitely ain't getting her husband's job. Ever

This happens despite recently throwing a night-time online mardy strop after Young Dave demoted “Oiky” in a bid to persuade some of the teaching profession to vote for him next year, which caused Private Eye to refer to her state at the time as “Absolutely Pixellated”. But, on a more serious note, she has been on another late-night Twitter excursion to berate Jack Monroe. 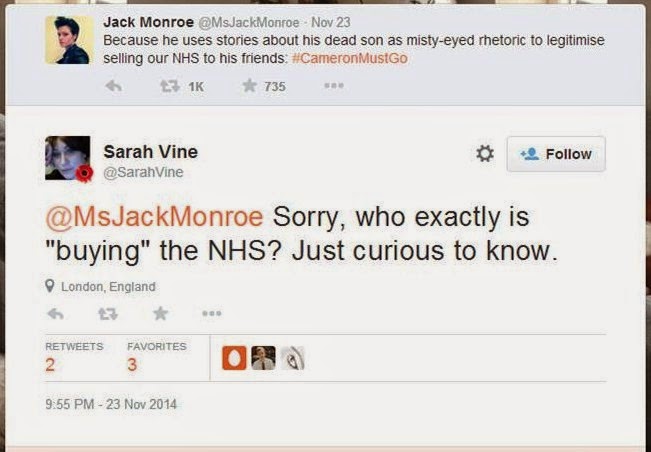 Ms Monroe expressed an opinion on Twitter about the manner in which Cameron defends his party’s actions on the NHS. Free speech means that is allowed. Ms Vine, though, being a Mail columnist who has met the Camerons, has been ordered over the top by her legendarily foul mouthed editor as part of a coordinated hit on Ms Monroe for being Not The Daily Mail’s Kind Of Person With Intent. 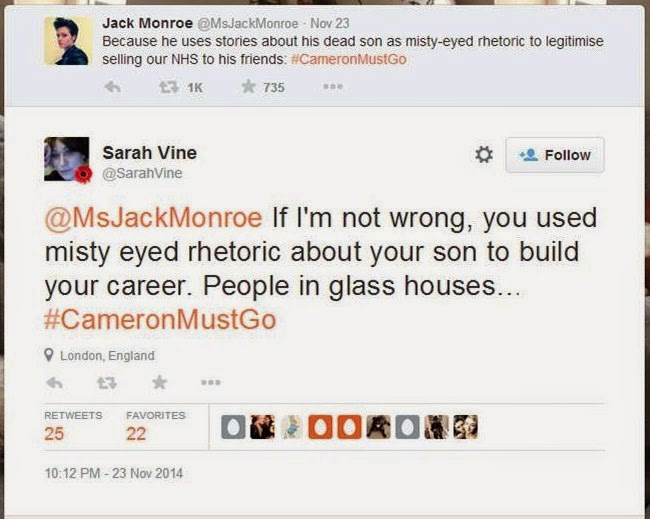 ... but give it sheventeen minutesh, and she's really, really angry. So angry that she left the #CameronMustGo hashtag in. Oops!

“So cruel and such a hypocrite” starts the typically endless Mail headline, designed to firm up opinions without the need to read the underlying article. The assertion is made that Ms Monroe used her son to “build her career”, which she did not. This assumes that Ms Monroe secured her income streams as a result of the content of a book which she had yet to write – a difficult proposition. 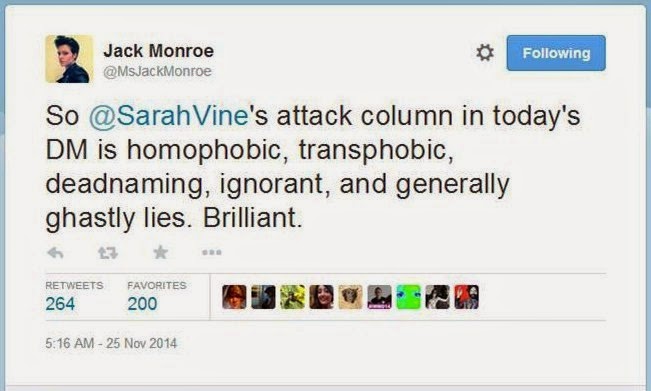 Sounds like business as usual for the Mail, then

There’s more: “Contributing to a thread on the site called ‘cameronmustgo’, she wrote: ‘Because he uses stories about his dead son as misty-eyed rhetoric to legitimise selling our NHS to his friends.’ In a fury, I replied: ‘If I’m not wrong, you used misty-eyed rhetoric about your son to build your career. People in glass houses…’”. And, as Jon Stewart might have said, two things here. 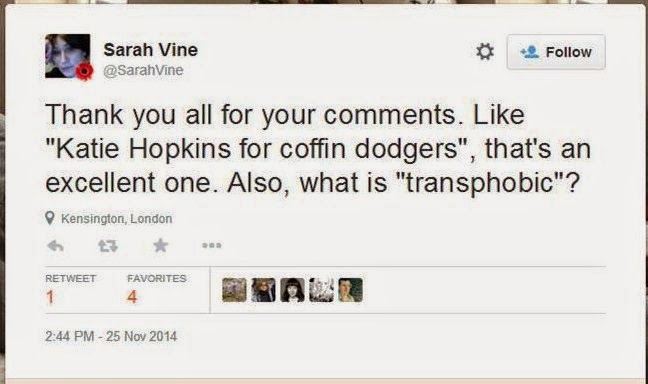 "What is 'transphobic' - and can I buy it at Waitrose?"

One, we are talking about a hashtag, not a website, and Ms Vine, not being stupid, ought to know the difference. And two, that was not her first reply to Ms Monroe (her first effort was a rather more mild “Sorry, who exactly is ‘buying’ the NHS? Just curious to know”). Anyone not charitably inclined might think that taking a whole 17 minutes to work herself up into that “fury” looks ominously faux. 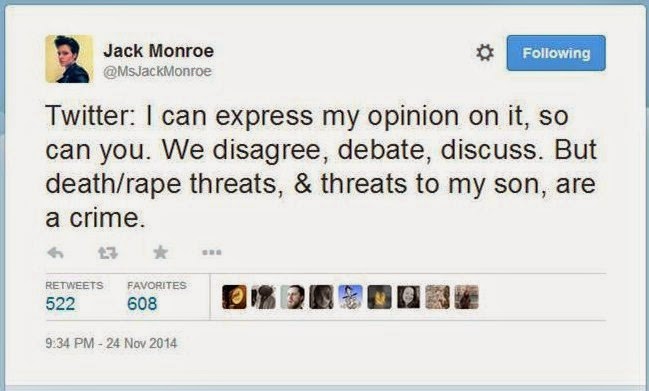 Yep, that's what Mail pundits care about. Damaging their targets, then running away

And save us the “I have received so much online abuse from her Left-wing supporters I seem to have ‘blocked’ half of North London”. Ms Monroe, partly as a result of Ms Vine’s Mail hatchet job, has received rape and death threats. But then, Mail pundits and their editor don’t give a crap about a little “collateral damage”. All that’s on Sarah Vine’s mind is knowing what “transphobic” means.

Plus, of course, wondering how to spend her six-figure wad. Pass the sick bucket.
Posted by Tim Fenton at 17:29

What's also of concern was Vine repeatedly ignored the majority of the other commenters who replied to her quip about the NHS was not being privatised or "that's not privatisation"... her focus again and again returned to Monroe.
It was obvious what was going to happen. So obvious, I tweeted as it went on about a right wing columnist and poverty campaigner in Twitter spat - asking what's the betting there will be a "monstering in the Mail tomorrow"
And hey presto - there was. It was a set up.
It's their warning - if you tangle with our team, we will not just have a shot at you on Twitter, where all are equal, we will also take out a full page or two and rip you to pieces in The Mail and the most read website in the country. If that's not abusing your position to bully individuals (not even counting the "the man who hated Britain" crap), then I don't know what is.
I'd suggest Jack gave the new IPSO a call to complain, but really, what's the point. Same old firm.

I was totally unaware of just who Sarah Vine was until I read Jack's timeline this morning.

She really is a pretty nasty piece of work, well suited to Dacre and the tax-avoiding Rothermere. But please cut her some slack, after all being married to a borderline sociopath like Gove would have an effect on anyone's psyche

What's worst about this is the incoherence of her article. At least most hatchet jobs have some kind of logic to them - even the Jan Moir article on Gately sort of had that. But today Vine berates Monroe for discussing her son in public (when the entire point of her writing has always been to give a personal take on how benefit cuts hurt real people), but then claims that Cameron using Ivan to make political points is ok because, um, he and SamCam loved him very much.

Surely even for her the insinuation that Monroe doesn't love her son as much as the Camerons love their children is too far.

I'm glad to see someone publicly caling out Cameron for doing this so often - it was treated by the press covering the NHS section of the last conference speech as a truly moving moment, but it's pretty low - and indicative of how little the tories are trusted on the NHS - to invoke a dead child in order to pretend that policies are working.

also if she's so concerned about Jack Monroe having a kid while still thinking she was straight and subsequently coming out, maybe she should tell her husband, who's been effusive in his support for Crispin Blunt who had 2 kids with his wife then left her - the reason for his leaving being his homosexuality.

She also tweeted about Napoleon's penis, describing it as "leathery." She may have been tired and it was Liz Jones she was seeing, of course.

On the subject of loving your children, remind me who it was that left one of them in the pub ...