Look out, folks – we’re going to have another wet Winter! Well, in the retelling, perhaps – but, as ever, the tabloids have been picking and choosing their forecasts to suit the headlines they have already written. What nobody has forecast is what the Express has told its readers: “Flood Chaos For 3 Months ... Weather experts predict another Winter washout”. Yeah, right. 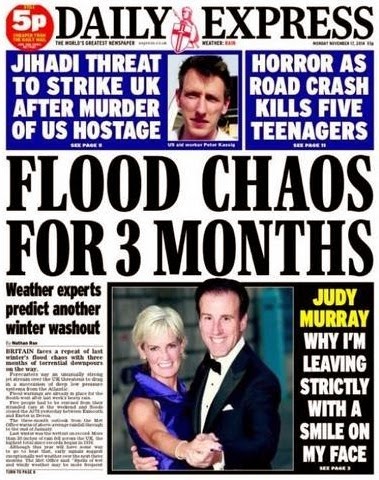 Nathan Rao – who has left the Express but is still contributing as a freelance – is not pulling his headline punches: “MORE flood woe for Britain? Forecasters' shock warning of WETTEST winter for 30 YEARS ... BRITAIN is about to battered by another bout of autumn storms as the country faces one of the wettest winters in 30 years” he tells. And no it doesn’t.

The small print brings the caveats: “The Met Office’s three-month contingency outlook warns of the risk of above-average rainfall through to the end of January - using probability data from 1981”. So we’re talking possibilities rather than certainties, and in recent Express traditions, Rao has been cobbling his copy together by cutting and pasting from the Met Office website.

Having said that, he isn’t the only one: over at the Mail, there is similarly apocalyptic news: “Britain could be facing one of the wettest winters ever warns Met Office amid claims conditions are right for series of powerful Atlantic storms”. Do go on. “The latest three-month outlook from the Met Office, which covers November to January, suggests that the next three months will be wetter than average”.

What were those words again? “Could be”, “claims”, and “suggests that”. Nod’s as good as a wink to a blind bat, eh? But forecasters are only predicting with any certainty for this week and next. And, while looking at the Mail knife-and-forking paragraphs from the Met Office site, a thought enters: the Dacre doggies are playing both sides of the meteorological field here.

For instance, they commissioned James “saviour of Western Civilisation” Delingpole to rubbish the organisation last year: “Was there ever a government quango quite so useless as the Met Office?” carped Del Boy, with air quotes set to stun. Serial fraud Christopher Booker told that the Met Office “has become a national laughing stock year after year for getting its long-term predictions ... so spectacularly wrong”.

Yet now, there they are, lapping up that same Met Office’s content, because it can be used to feed the reader-frightening headlines, and the fear of unknown Winter conditions. The Express has even ditched the quacks at Positive Weather Solutions on this occasion. But the reality is that, with the UK positioned between the sea and the European landmass, forecasting for any length of time is difficult to do.

It’s far easier for the press to stand by and whine. No change there, then.
Posted by Tim Fenton at 14:33

I predict that it's going to be one of the thirty three wettest winters since 1981.

The trick is to distort and then shout this out loud.

If it comes to pass then they (the papers) got it right. If it turns out to be incorrect then the Met Office "failed again!"

The Mail and the Express recycle the same stories every year - it's a tragic indicator of just how hopelessly short term public memory can be.