To no surprise at all, the Murdoch mafiosi have been instructed - probably by Don Rupioni himself - to talk up the accidental appointment to the Foreign Office of London’s formerly very occasional Mayor Alexander Boris de Pfeffel Johnson, to make it seem that Bozza really is deserving of a role that gives him control of not just GCHQ, but also MI6, a frightening prospect given The Blond’s towering ineptitude. 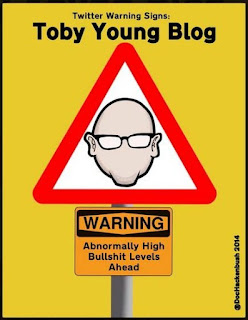 This has resulted in an opportunity for the loathsome Toby Young to score More And Bigger Paycheques For Himself Personally Now by eulogising Bozza’s abilities, of which there are pitifully few, save for blustering, lying, shagging, and then lying again. There is, admittedly, also the waving of arms in the manner of an upmarket Ken Dodd; perhaps someone will buy Bozza a tickling stick to complete the ensemble.

So what is Tobes’ schtick? “JAMES BLOND Toby Young explains why hiring Boris Johnson as head of MI6 is great for Britain … The fact that he comes across as a bumbling Brit may not do us any harm overseas, let’s face it, most foreigners already think of us that way”. What, most foreigners think we’re a nation of inept, philandering liars?

But do go on. “For one thing, his appointment sends a clear message to our partners in the EU that we’re serious about Brexit … No wonder our pro-Remain European allies reacted with such fury … If the Eurocrats are throwing their toys out of the pram, Boris is off to a good start”. They aren’t “throwing their toys out of the pram”, Tobes, they’re letting us know just how serious a politician Bozza is, and that is as in, not at all.

Try again. “Then there’s the fact that he thinks Brexit will be good for the UK, unlike so many of his senior Westminster colleagues”. Wrong. Bozza couldn’t give a crap about what is good for the UK - he’s in this game only for himself, and always has been. “If the new Prime Minister is serious about taking us out of the EU, we need a Foreign ­Secretary who’s upbeat about Britain’s post-Brexit future”. Upbeat about his own future, Tobes.

And then comes the pièce de résistance: “Boris is a pretty good salesman in his own right. As Mayor of London, his main job was to attract business and investment to our capital - and the transformation of the city’s skyline is testament to how effective he was. If he can do the same for UK PLC, Britain’s depressed northern cities will be lit up like Las Vegas”.

Shine a light, where to start with that deluge of bullshit? His job as Mayor of London was to keep the place moving, and at that he was a total failure, with congestion and air pollution clogging the capital, bus services moving at a glacial pace, and the Tube beset by lousy industrial relations and lack of continuity in investment. Caving in to the developers is not what he should have been doing. And I’ll pass on “northern cities” being turned into upmarket clip joints where no-one can afford to live, thanks.

Any more feeble attempts to talk up the clown? “Above all, he has the gift of lifting people’s spirits”. Go to Liverpool and try telling the locals that. Oh, and if you go anywhere near the Pier Head, take a lifejacket for when they chuck you in the Mersey.

Boris Johnson is a joke. That is why the rest of the world is now treating Britain in the same way. If only Toby Young could take his head from up his arse, he might see that.
Posted by Tim Fenton at 13:53

"...the transformation of the city’s skyline..."

London is now infested with high rise slums of the imagination covered in neon. Now arguably the ugliest capital city in Europe.

Plainly Toby Jug knows as little of architecture as everything else.

What a laughing stock, know-nothing nincompoop. I'm glad he's on the other side.

Nor should we forget it was Ken Bigley's brother who told Johnson, "Get out of public life."

Now May has done precisely the opposite. Tells you all you need to know about her and Johnson.

Mark my words, this woman will be worse than any of her predecessors. It's written all over the Eastbourne vicar's daughter's mouth and receding chin.

Johnson of course is what he's always been and always will be, a tenth rate ex public schoolboy - You know, one of the gang May claimed she was trying to boot out. Yeah, right.