After the damning conclusions of John Chilcot yesterday, and the continued diminution of Tony Blair - live on radio and TV - came the real problem for all those who scrabble around the dunghill that is Grubstreet: many of them backed the Iraq adventure to the hilt. The questions Chilcot says should have been asked were not even considered by the press in its headlong rush to urge death and destruction - but on someone else’s country. 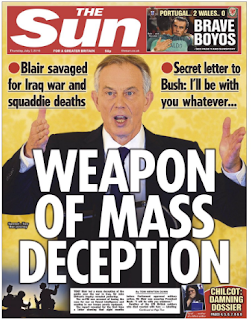 For the Murdoch mafiosi at the Super Soaraway Currant Bun, there was one course of action, and one alone: dump on Blair - who, after all, had incurred Don Rupioni’s displeasure when he “consoled” Wendi Deng without telling The Boss - and hope that the readers had short enough memories that they would not notice the screeching U-turn and the lingering whiff of rank hypocrisy. It didn’t work.

The apologia is straightforward enough: today’s Sun front page tells readers “Blair savaged for Iraq war and squaddie deaths … “Secret letter to Bush: I’ll be with you whatever … WEAPON OF MASS DECEPTION”. Chilcot is declared to be a “damning dossier”. And it’s the most shameless and squirming hypocrisy since the all too similar excuses were deployed over reporting of the Hillsborough stadium disaster. 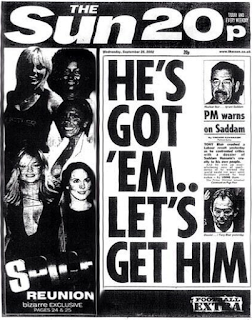 Then, as with the 2003 Iraq War, the Sun used a single source as its cue for action, took the information provided as unvarnished fact, produced reams of thundering, bellicose, snarling and self-justifying copy, patronised and ridiculed any dissenters to the point of viciousness, and conned its readers rotten. And in both cases A Big Boy Did It And Ran Away. The poor dears in the Baby Shard bunker are mere helpless victims. 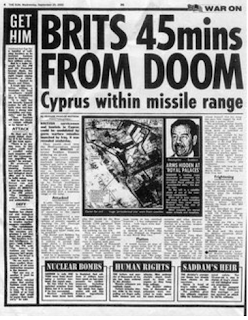 ... the overblown inside page frightener ...

The roll of shame in 2002 and 2003, just in case anyone missed it at the time, included a Sun front page telling “HE’S GOT ‘EM … LET’S GET HIM”, with an inside page headline claiming “BRITS 45min FROM DOOM … Cyprus within missile range” and a paragraph at the foot of the page headed “NUCLEAR BOMBS”, which Saddam Hussein didn’t have either. Rupert Murdoch threw more than 170 newspapers behind the war. 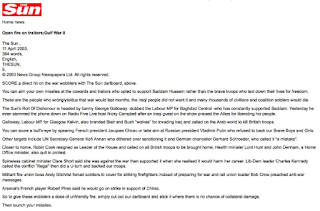 ... and the hit job on dissenters

The Sun even ran an article called “Open fire on traitors”, which urged readers to “SCORE a direct hit on the war wobblers with the Sun dartboard”. Those vilified included Robin Cook and Charles Kennedy - who were right about the conflict - as well as then German Chancellor Gerhard Schröder and French president Jacques Chirac. Clare Short, who resigned from the cabinet over the war, was given especially sneering treatment.

And what did Murdoch have to say about Tony Blair back then? “I think Tony is being extraordinarily courageous and strong ... It's not easy to do that living in a party which is largely composed of people who have a knee-jerk anti-Americanism and are sort of pacifist. But he's shown great guts as he did”. Murdoch and his papers could have equivocated. Instead they backed the Iraq adventure all the way..

So when the Sun mounts its high horse and attempts its sham campaign of deflection, I have only one thing to say. As Billy Connolly once said, there’s going to be some swearing - F*** OFF.
Posted by Tim Fenton at 09:38

In reality, Chilcot tells us nothing we didn't know already. And Murdoch and his jobsworths are what they've always been and always will be......neocon information clerks.

But there is a much deeper lesson to the sordid tale. It is this:

There is nothing new to the lies and deception that took us to war. Blair and his gang and other apologists are merely the latest version.

Both world wars, various European colonial wars, the Cold War, the Vietnam War, and all the other wars since, have been based on the same criminal propaganda and concealed motives. The facts are there for those who wish to dig deep enough and aren't afraid of the truth.

All of which is ominous for the future. Because now we see the same pre-war tactics levelled against Russia and China, the same demonisation, the same military build up by the West, the same lies deployed, the same greed for natural resources, the same hatred for genuine democracy, the same bribery of indigenous fascists (at least until they get out of control), the same global theft. Check out the increase in NATO bases and military numbers deployed in Eastern Europe.

Blair is a truly appalling figure, as vile as they come. But he's not the first and tragically he won't be the last. You need only watch a rerun of Benn's disgusting speech to the Commons urging more bombing of Syria. Be in no doubt that New Labour and the tories have more of the same waiting in a quiet queue for their turn at treachery. The same applies to similar mindsets in Europe and of course particularly in the USA and its gang of Texas Nazis.

There is worse to come. If we again let people like Blair loose. But who would bet against it?

They do pick their days to unhesitatingly trust the government, don't they? Just as their editors always pick the right days or times to be on holiday, or in a meeting, or picking up the dry cleaning.

The Sun is about a reliable read as a Leadsom CV by all accounts.

There are other points about Blair.

He's either a liar or a completely ignorant fool. In a genuine democracy either defaults would be enough to disqualify him from ever holding any public office ever again. The former would see him land in jail for a very long time - which is where I think this horrible man should be.

He lied about weapons of mass destruction because that was - in his own words - the justification for launching the invasion and mass killing that followed. Not only were they never found after ransacking the country, but there was NEVER ANY EVIDENCE OF THEM IN THE FIRST PLACE. As a lawyer he knows perfectly well his actions constitute lying by omission.

Remember too this is the fellow appointed as a Middle East "peace" envoy. The ghosts of the dead would be laughing hysterically if they weren't weeping for those left behind as refugees, without parents or siblings and living in destitution.

And all because Blair and his accomplices and apologists wanted power and money. The whole lot of them should be dragged kicking and screaming to the bar of Complaining Humanity. Nor should we forget these are the very people who attack Jeremy Corbyn and want to replace his decency with their own brand of bitter, lethal spivvery.

I didn't ask Blair.
I told him.

Good job we've just had a working-class revolt against the establishment, isn't it? Because if we hadn't, Murdoch would still be... oh, wait.