The Daily Mail’s Scottish edition has been making a characteristic contribution to the demonisation of refugees in its own inimitable manner by pretending that those who have found a new home on the island of Bute want to leave, that they are somehow ungrateful for all the taxpayers’ cash that has been spent on them. They might have got away with it. But the locals are well used to the Mail’s modus operandi. 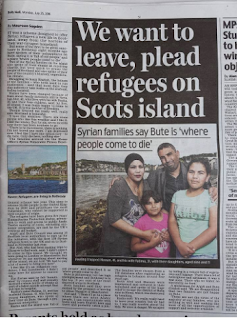 “We want to leave, plead refugees on Scots Island … Syrian families say Bute ‘is where people come to die’” is the headline of Maureen Sugden’s article, which was included with the Scottish Daily Mail last Monday. The framing of the story is typical Mail: “It was a scheme designed to offer Syrian refugees a new life in Scotland, away from the horrors of their war-ravaged homeland … But some of the first to be given sanctuary in Rothesay eight months ago have spoken of their unhappiness on Bute, saying it is ‘full of old people’ and a place ‘where people come to die’”.

Only later on do we read that the refugees are “Struggling to learn English”. They could have also meant “where people come to retire” - the concept being a European one, and likely to be unknown in their native Syria. But this fits the Mail’s agenda, while the paper indulges in some industrial-scale brass neck when identifying the families.

“Names have been changed because of fears about family members still in Syria” tells Ms Sugden. SO WHY THE FULL COLOUR PHOTOS IDENTIFYING THE TWO FAMILIES YOU INTERVIEWED? But enough: you get the picture all too well. Local author Lisa O’Donnell was horrified at what she read, and put the Mail straight.

She took to Facebook to tell “A journalist came to the Island … and wrote this article based on information received from a local refugee with very limited English skills. It is clear to me what has been lost in translation … given he probably saw houses bombed and innocent children slain on Syrian streets it's fairly unlikely he said something like this … the deliberate misinterpretation of that grief by the DM is designed to incite hatred by making the family appear ungrateful”. And it got worse for the Mail.

Local island paper The Buteman ran an article yesterday painting a very different picture of how the refugees are faring there. “Of the 26 individuals needing help with the language, all except a small minority have regularly attended classes. To date, nine have achieved ESOL (English for Speakers of Other Languages) SVQ qualifications, and 15 have received a certificate of achievement to mark their progression and attendance”.

There was more: “Some of the refugees are already in full-time employment, a number have summer jobs and several have applied for college courses. Five of the refugees have recently completed a Skills for Work programme … several are volunteering to help with setting up the site for this weekend’s ButeFest music festival”.

People on Bute have seen through the latest attempt by the Mail to turn the local population against refugees. Well done Lisa O’Donnell. Well done The Buteman. And shame, once again, on the appalling journalism of the Daily Mail.
Posted by Tim Fenton at 16:47

Not sure about this. One the one hand, Ms O'Donnell's Facebook plaint is just her opinion, studded with 'probably', 'likely' and other qualifiers. She clearly doesn't know the facts of the situation and is just putting forward a more favourable interpretation. It's not exactly a robust rebuttal.

But the key part of her opinion is that the refugee to whom the Mail's reporter spoke did not have a reasonable standard of spoken English and that confusion therefore occurred. This doesn't gel at all well with the local newspaper's assertion that nearly all the Bute refugees are doing well in their language studies. Yes, it's possible that the Mail spoke to one of the few language 'refuseniks', but to adopt Ms O'Donnell's formula, it's not very likely is it.

In conclusion, I can't help noticing that the Buteman's more positive article, although well-evidenced, doesn't contain any input from Ms O'Donnell, or indeed any other Bute islander. It would be wrong to draw conclusions from that, although the suspicion has to be that no-one (except the local council) wanted to give an opinion either way.

The Mail is perfectly capable of twisting what people say and putting words in their mouths of people who are native English speakers. I think it's safe to assume anyone quoted in the Mail didn't quite say the thing we're being told they said or at the very least their comments are being taken out of context.