For so long the butt of jokes about the length of time it was taking him to finish his long-awaited report on the Iraq War, John Chilcot finally delivered his summary verdict - backed up by that twelve-volume report - in the same room where Lord Justice Leveson had delivered his report on the press, whose participation in the Iraq adventure is an integral part of the narrative. Expectations had been varied. The conclusion was anything but. 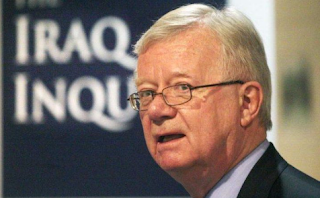 Many claimed Chilcot would deliver a whitewash, exonerating the security services, the spinners, the military top brass, and above all the politicians, chief of whom was Tony Blair. It was soon apparent that there was a good reason Chilcot had taken so much care over his findings - to remove any possibility of any challenge to them. Because his conclusions were as damning as they were direct.

The charge sheet made for grim reading.

The opportunities for a peaceful settlement had not been exhausted.

The legal case for the war was “far from satisfactory”.

The claims on Weapons of Mass Destruction (WMDs) displayed a “certainty that was not justified”.

Saddam Hussein and the Ba’athist Government in Baghdad posed “no imminent threat”.

Blair, along with Dubya Bush, had undermined the authority of the United Nations security council by going to war without its authority.

Blair was warned that al-Qa’eda style terror attacks would increase in the aftermath of the war. This was prophetic.

There was insufficient planning for the campaign itself.

There was insufficient planning for the aftermath of the war.

The British army did not have sufficient resources to maintain its campaigns in both Iraq and Afghanistan at the same time.

Policy on Iraq was based on flawed intelligence, which went unchallenged.

Blair overestimated his ability to influence US decisions on Iraq.

There was insufficient questioning of Blair’s decisions by his cabinet colleagues.

At least 150,000 Iraqis (and probably many more) died in the conflict, and around a million were “displaced” - they became refugees in their own country.

Tony Blair’s reputation has been irrecoverably diminished by Chilcot’s findings. It is inconceivable that those who still cherish memories of his time in Downing Street will be so quick in future to remind Labour members that he won three General Elections when one of those was won on a false pretext, and the Middle East has been set alight.

Blair is still trying to excuse his actions. He should desist. He is beyond delusional in doing so. But he is not alone in being up to his neck in the Iraq quagmire. All those cabinet colleagues who could, and indeed should, have questioned him more closely, and by their inaction effectively duped many Labour back benchers and turned them in to mere lobby fodder, should also hang their heads in shame.

Nor does the Tory Party have anything to crow about: their votes were key to Blair getting his way in the Commons. That includes the current Prime Minister and Chancellor of the Exchequer (very few of The Blue Team bothered to turn up for the post-Chilcot Commons statement and debate, which just makes them look worse).

The only leader of a major Westminster political party at that time to deport himself with dignity and make the right call on this appallingly misguided adventure is no longer with us. Charles Kennedy acted with courage, conviction and distinction in leading the Lib Dems to oppose the whole charade. He was mocked by his political opponents. He was viciously pilloried by the press. But he was right, as he was on so much else.

What is worst about today’s revelations, as demonstrated by Blair’s self-justifying lack of genuine contrition, is that it is only the start. By tomorrow, the excuse-making and deflection will have reached the press, and especially that part owned by Rupert Murdoch. Those papers that now harangue Blair and his then ministers for the death and injury of so many service personnel had no problem at the time about them being put in harm’s way.

Only one thing good will come out of Chilcot: Governments of all stripes will think a little more, and consult more widely, before committing Britain’s armed forces to war again.
Posted by Tim Fenton at 16:11

Do you know what Blair reminds me of......Sidney Falco, the PR creep in the old film Sweet Smell of Success.


The man has no moral compass whatever. He's an empty shell of ambition and self-pity when things (such as the Chilcot Repot) don't go his way. Add in the C5 documentary The Blair Rich Project and he looks as though there's even less to him than met the eye. Rotten-to-the-core in fact, whining voice and all. At one point in his waffling press diatribe this afternoon he looked as though he was about to burst into tears at his own demise.

A thoroughly corrupt individual. A war criminal. A mass murderer. He and his type, particularly the mouthpieces Campbell and McTernan don't have a scrap of humanity between them.

Let that be the epitaph for him, his New Labour supporters and apologists. The sooner he's gone the better. The same goes for the entire House of Scoundrels. Shame on them all. Shame on us for allowing them to perpetrate their murderous designs.

Let's bear in mind that not only did Shameron vote for the illegal war in Iraq, he also "helped" turn Libya into a failed state and tried to do the same in Libya, if not for the intervention of Ed Miliband (who it seems had his moments) prevented this.

Who knows what would have happened if Dave from PR had got his "opportunity" in 2013? They lay low because they know they, and Killary Clinton, aren't any better.

As a country wee we should shoulder the shame of Iraq as Germany does world war 2.