Yesterday evening, the BBC’s main news was mostly about Theresa May’s reshuffle, this taking up most of the programme. At the end, there was no more than a fleeting mention of a lorry driving into a crowd in the southern French city of Nice. What a difference daybreak has brought: that lorry was driven deliberately into Bastille Day crowds on the city’s Promenade des Anglais, and 84 poor souls were now dead. 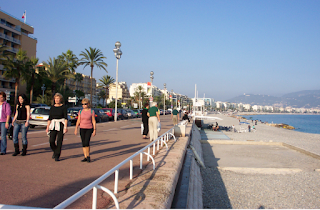 Sometimes there are no words, no sentiment that can adequately convey the emptiness felt, the numbing realisation of what some will do in pursuit of ideology. It is yet another horror visited on the people of France, so soon after the Paris attacks that killed so many, with those attacks coming while the memory of the Charlie Hebdo killings was still in the public consciousness. It is a sad and sombre time. 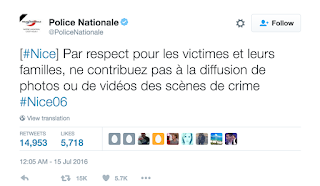 As families grieve, and others wait by hospital bedsides, the authorities in France have urged that calm, responsible reporting should be the order of the day, and the Police Nationale Twitter feed has asked “Par respect pour les victimes et leurs familles, ne contribuez pas à la diffusion de photos ou de vidéos des scènes de crime”. An appeal not to circulate photos or videos from the scene, with their inevitably graphic images. 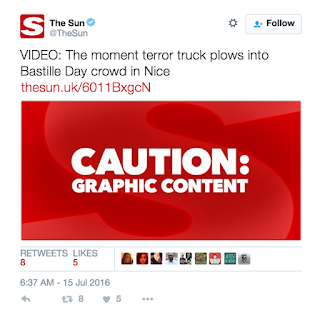 Most have heeded the call, shown that even the most raucous part of the Fourth Estate can behave sensitively and responsibly when the occasion demands. But not all: to no surprise at all, the Murdoch doggies at the Sun have had no restraint placed on their lust for extra sales and clicks, advertising “VIDEO: The moment terror truck plows into Bastille Day crowd in Nice” with the tagline “CAUTION: GRAPHIC CONTENT”.

That much was sick enough, but it got worse, as the inevitable blame game began, and some who would have been best served stepping away from social media waded in to go after the Left, Muslims, and indeed anyone they could find to pin the horror upon. Typical was actor Frances Barber, whose antics will be familiar to Zelo Street regulars, who earlier in the evening had frothed “Stalin led pogroms for mentally disabled. Seumus [sic] loves him. And therefore Corbyn”. Add in the Nice attacks, and off she went.

“Blood on the streets & Corbyn won't resign to get a major opposition to help deal with this. I am disgusted & heartbroken”. Scores of dead bodies strewn across the Promenade des Anglais and someone is perverse enough to use it as a way to kick Jeremy Corbyn. 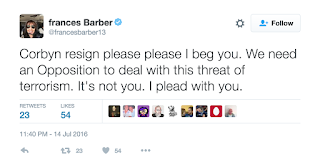 And it got worse still, as she frothed uncontrollably “Corbyn resign please please I beg you. We need an Opposition to deal with this threat of terrorism. It's not you. I plead with you”. It certainly isn’t him. But it is an example, like the Sun’s exploitation of the killings for its own ends, of how the saddest and most desperate of times can be hijacked, with the actual event left unaddressed, such is the desire to push personal agendas.

It could also be because Ms Barber was let loose on Twitter rather late in the evening, something for which she has previous form.

But we should not lose sight of what happened last night in Nice.
Posted by Tim Fenton at 10:03

Those Barber comments beggar belief. But the Scum is of course being its usual disgusting self - how and why people buy and read (let alone believe) that Nazi rag is beyond me. Sooner or later the penny will drop, and with it the Scum's circulation. It can't come soon enough.

The horror visited yet again on France is visited on all of us. But none of us can remotely feel what the victim families suffer right now. It is unimaginable. They are the most important people in this and always will be.

Not Barber and her twisted sense of whatever......and certainly not the Scum. There's little point asking if they can sink any lower because they always do.

Meanwhile, pity poor France and the victims. And mourn with them.

Barber obviously out to claim the Mensch 'badge of the week' prize. Silly .

It wasn't just The Scum. SkyNews were at it.

The DM is truly vile.

Dacre: "Get me some glamour pics you c**ts. And check the Kardashians' Twitter accounts. Now get one with it! What?
Hack: "Rihanna is in Nice, I think."
Dacre:"Great! What are you waiting for? Go"

And so.
"Murdered in the Bastille Day massacre: A beautiful Russian student"
"My heart breaks with every tragedy': Khloe Kardashian joins chorus of celebrities sharing their horror at Bastille Day massacre on social media "
"Rihanna cancels Nice concert in the wake of deadly terror attack as she confirms she is 'safe' in the French city"

Ms Barber is her usual self. I can't find it in me to condemn the Sun this time, though. Not wholeheartedly, at any rate. How many times have we seen the planes slam into the WTC over the years? No-one has ever suggested the media should suppress those images. It's an editorial call, and a tough one, but my feeling is that providing a 'graphic content' warning is fair enough. For a start, we're getting perilously close to Farenheit 541 territory these days, in which someone taking offence at something is grounds for its obliteration. For a second, this request is being made by the state police of the French government, who (whatever their undoubted virtues) have just been revealed to have censored certain aspects of the attacks that took place in Paris last November. (Unlike Britain, French police are directly controlled by the Minister of the Interior, analogous to Home Secretary).

The point made about Barber has little to do with showing graphic footage.

But plenty to do with how she used it for disgusting far right propaganda against someone completely unconnected to the horror.

"Clear?" - yes, but it was clear already, so your comment adds nothing.

"...the state police of the French government, who (whatever their undoubted virtues) have just been revealed to have censored certain aspects of the attacks that took place in Paris..."

And just what would those "certain aspects" be?.......Wouldn't be allegations of torture and mutilation would it?......You know, like those alleged by jaden002.

And the point made about Barber was clear to everybody - except those who want to divert it elsewhere. As in, you know, "Oo, look over there...torture, mutilation...certain aspects."